The Week The Panhandle Burned 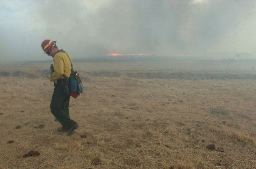 I know, it’s been a while. I know, I post in spurts. Lots of good things were happening, and then the whole area caught fire.

I live in the Texas Panhandle. And it seems the whole place has been burning all week. The biggest fires are between thirty-minutes and an hour’s drive from my town–the ones that are still burning.

The high winds Sunday knocked down a lot of power lines and started fires from Childress in the southeast corner of the Panhandle to Dalhart in the northwest corner, near Oklahoma and New Mexico. They shut down the major highway that runs through town at the east city limits all the way to the next little town 14 miles away, because of fires on either side. Fortunately, those fires ran up against plowed fields and didn’t spread like the ones near I-40 a similar distance to the north. Even more fortunately, those winds were out of the south and blew the fire the other way.
Because of the south winds, I don’t catch a whiff of the smoke except when there’s a little shift, but you know the fires are there. They’ve been so bad because we haven’t had more than a spit of rain since last September. Stepping on the grass turns it to dust. The heat of a car engine pulled off the road onto the grass is enough to catch it on fire.

A friend is a volunteer with the McLean fire department, where fire threatened to consume the whole town. He’s worked as many hours fighting fires as they’ll let him, so now he’s home again, telling stories. Besides ordinary windblown sparks, the fires have been so hard to contain because the cow chips catch fire and the wind would blow them like burning frisbees. And rabbits come out of their burrows already burning and run madly around catching everything on fire. The firefighters would try to put the poor bunnies out, but they were so fast…

The state of wildlife and livestock is pitiful. Everything they had to eat is gone–even the hay the ranchers managed to gather up (since there’s been no rain, hay is pretty scarce too). Many of the animals who survived are in worse state than those who died–too awful to share. They don’t really know how many made it, because the fences are burned and the cows are scattered to the winds.

The acreage burned is pretty much as if the entire state of Connecticut had burned. Almost a million acres… The grass will come back, they’re telling us. If we get some rain…

Anyway, I’ve actually been spending more time trying not to think about this–but it’s hard. We’re down to two fires still burning. Any thoughts and prayers you might have lying around will be welcomed.