I had one the other night that still lingers. This one was more bittersweet than funny (like the cows at the high school).

Just before I left town to go stay with my daughter and babysit for two weeks, my cousin Scott died. He was the first of our generation to leave us, and he was only four months older than me. That year was the only year that my mother and all three of her sisters had a baby. Scott was the last child of the oldest sister, and I’m the first child of the youngest sister. Paul’s a month older than me, and David is two weeks younger. (My mamaw told Mama they’d better never do that to her again. She was exhausted, helping with all those babies.)


I hadn’t seen Scott in a while–not since our aunt’s funeral in Waco a year and a half ago. (Now only the oldest and youngest sisters are left of the four sisters.) I could have delayed my trip to go to the funeral–Mama wanted to go and couldn’t drive herself–but I decided it would have delayed it too much. My daughter needed me, and my brother and brother-in-law had already volunteered to take Mama. And I was okay with that decision.

So, the dream. I don’t remember when exactly it was–either just before or just after I got home. But I dreamed that Scott, David, Paul’s baby brother Matt and I were in Colorado working on a house. It wasn’t any of the houses where we met and played when we were growing up, but it belonged to the family somehow, and I’ve dreamed about this house before. We all looked like I remember us looking years ago–just out of college, maybe. Scott and I both had dark hair (we are the grayest of all the multitude of cousins), and we were all skinny.

In the dream, after working for a while, we all sat down at the kitchen table to have a soda and rest and visit. And I remember thinking, “But Scott’s dead, isn’t he?” and looking closely at him to see if it might be one of his brothers. But no, it was Scott all right. And then I wondered why Matt was there, instead of Paul–since Paul was the one born the same year as the rest of us. Never have figured that one out. But in my dream, I got a hug from Scott. A long, strong, big cousinly bear hug.

Now, maybe it was just my mind deciding I needed to work things out, but I like to think that Scott decided to drop in to say goodbye. 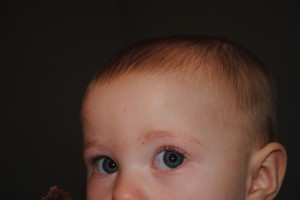 I’m up visiting the daughter, helping out with the chilluns while she tries to get her PhD finished. I’m filling in for the nanny until she comes back from having her new baby. (I don’t know if the baby will come too or not.) and baby grandgirl is now 1 year old and wants to help me. I have to keep her from typing with her feet, standing on the table, falling off the bench, and putting her apple in the crayon box. She’s absolutely adorable.

I’m having adventures in driving in Pittsburgh again, too. I dropped my daughter off at Carnegie Mellon so she could go to her seminar and I could come back home to meet the grandboy from the bus and take him to his social skills therapy. I got lost before I got off the CMU campus. But the daughter was available by cellphone and got me straightened out and where I needed to be. We even made it out to therapy without mishap. 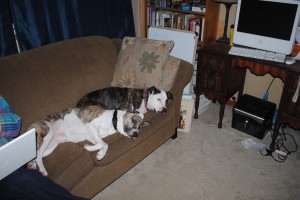 Then came home to discover that the dog ate a whole bag (less about 6 kisses) of dark chocolate kiusses, foil and all. She’s a medium sized dog (the one in front, in the picture–the other is her cousin dog who came to visit) so maybe it won’t be too big a dose.

And yet, I am still writing, believe it or not. I’m not getting a whole lot done at a time, and when I can’t turn on the heater (we can’t run the heater in my room and baby girl’s room at the same time or it will blow a breaker), I can’t write, because it’s cold enough for this Southern wuss with no cold tolerance that I just get under the covers and go to sleep. But I am writing.