I was on track to keep up with the blog posts, and then the wind changed.

It’s not like in Mary Poppins, where the wind only changes when she leaves town. The wind changes a lot in Texas, especially this time of year. And every time it changes, it blows in something else that somebody in our house is allergic to. This time, it’s me, and it’s got me trying to cough up a lung. I don’t know if I’m light-headed from the coughing and dripping (yeah, the nose is going too), or from the meds I’m taking to stop it, but I can’t turn or stand up quickly without having to grab onto something.

And I’m leaving town tomorrow for the Popular Culture Association meeting in San Antonio! I get to play author for one of the romance track panels, and hang out with smart people who love romance. What could be more cool? 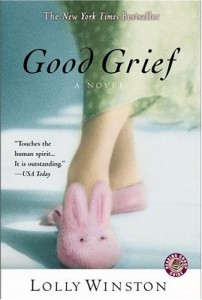 Anyway, it’s been hard to motivate myself to write blogs or anything else while I’m coughing so hard. But I did read a book I decided would qualify as a TBR challenge book.

I’m pretty sure it hasn’t been on my TBR shelf more than a couple of years. We’ve only been in this house for three, and I’m pretty sure I didn’t move it here, but it’s been waiting for me to read it long enough to get moved several times and eventually wind up under the futon where the grandboys sleep when they come to visit. So, here goes.

The Particulars: Paperback reprint of a hardcover released by Warner Books in 2004. It’s a “Women’s fiction” story.

Why do I have it? Who the heck knows? I saw it, thought it looked interesting, and brought it home. I’m pretty sure I bought it used–maybe from a writer’s group exchange, maybe at a Friends of the Library sale…

What did I think? The book is about a woman’s recovery from the death of her husband. It begins several months after the funeral, and continues past the first anniversary of his death. It is sad and funny and poignant and at times I wanted to give the woman a hard shake. Not so much for “get over it already,” but for–well, idiocy. Yes, she was grieving, and maybe not entirely sane (she wears her bunny slippers and robe to work at one point–hence the cover), but there are several points where she’s so totally clueless about the people around her that I thought she needed a little shaking. But then, I guess that’s what those people are doing–shaking her up. It was a pretty good book, but wasn’t exactly what I was looking for when I read it. There was a bit of a mismatch between my mood and the book. Still, it was a good read, especially if you’re in the proper mood for it.

And I’m not finishing this review the same day I started it. I had to catch up with the dayjob, then I had to get ready to leave town. I will make a BIG effort to get a post about the PCA/ACA conference and about the trip to San Antonio up this week. I don’t have anything else to do this week…well, except finish my revisions and get the ms off, and start work on a world-building workshop for next week…

That book I couldn’t put down–

I finished it. So, I figure I ought to tell y’all what I thought about the whole thing. I never could put it down. 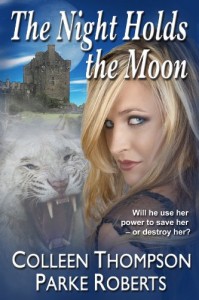 And the little things that bothered me so much at the beginning of the book? Not so much as I got into it. I got used to “the blonde” popping up to do things, I guess. The near-caricature-ness of the characters began to change. The dumb one wasn’t so dumb as she seemed–though she’s still got a LOT of room for growth, this is apparently only the first book of a series–and the “too-good-to-be-true” one wasn’t. The evilly-evil one stayed over-the-top evil, but–well, I’ll try not to be spoiler-y.

In the end, I liked the book. There were things I wish had been done differently–some people died that I wish hadn’t, things like that–but this is an epic fantasy. People die in epic fantasies, and sometimes it takes a REALLY long time for character growth to occur. Sometimes I don’t have the patience to wait for that growth–but we’ll see.

The Night Holds the Moon was a pretty good read. The central character–though this follows epic fantasy pattern by having more than one POV character–is something of a wanton, who is the “chosen” of a goddess, by being the one who can play the magic flute, and when she plays it, things happen. Weird things. She’s kind of a go-with-the-flow girl, who tends to be somewhat gullible, and perhaps trusts unwisely. She’s not really into politics, so when politics get all stirred up around her, she lets other people take care of things. There’s a cross-country trip, magic, betrayal, politics, death–you name it, it’s in here. Lots of twists, more than one of which surprised me. Pretty good stuff. Give it a try.