The One Rose Trilogy

The legends of the Godstruck were just that – legends. Until, in an attempt to defend her people, Captain Kallista Varyl called on the One for aid and was granted abilities such as no one had seen in centuries.

Now Kallista has been charged with a new destiny as one of the most powerful women in the land- but her power is useless if it cannot be controlled. Mastering her “Godstruck” abilities is the first step. The next, learning that she cannot unlock the secrets of the Compass Rose and defeat her nation’s enemy alone. And finally she must stop a demon-possessed king….

“…this is one solid story that I don’t mind admitting took me the day to read. Mostly because I slowed down on my reading speed. I didn’t want it over! And yet, stupidly, I hurried on because I couldn’t not know what was going to happen….It was one hell of a ride, and one that I intend to pass along to everyone who’ll listen.”

The Compass Rose, the first novel in Gail Dayton’s One Rose trilogy, is an epic romantic fantasy featuring a female protagonist who is as irresistibly sexy as she is tough. As the prophesized Chosen One, Kallista must do the impossible–travel into the heart of an enemy nation and defeat a demon-possessed king!

Kallista, a captain in the Adaran army as well as a naitan (magic wielder), is an intriguingly complex character with the carnal appetite of Laurell K. Hamilton’s Anita Blake and the tenacity of David Weber’s Honor Harrington. While defending her city from invading warriors–and outnumbered more than ten to one–Kallista calls upon the One for a miracle to save her people. She is suddenly filled with a power that she has never before experienced and from her hands comes a dark magic that instantly cuts down tens of thousands of enemy warriors.

After experts examine Kallista and find a strange mark on the back of her neck, it is revealed that she has indeed become a living myth, a being straight out of legend–she is Godstruck. The nation of Adara hasn’t seen a godstruck naitan in more than 1,000 years. As the Chosen One, Kallista is charged with the impossible: to travel deep into a distant enemy country-a nation that treats women as possessions–and exorcise a demon that is controlling its king!

With unadulterated sensuality that practically ignites the pages and a fantasy quest that is as masterfully intricate as it is entertaining, Dayton’s The Compass Rose will absolutely blow away fans of romance-powered fantasy. In a word: wow!

The land of Adara echoes with the legends of the Godstruck, tales of heroes granted powerful magic when the land and its people were threatened. No one has been Godstruck for a millennium, until Capt. Kallista Varyl calls on the One Goddess and is granted unthinkable power.

She is destined to stop a demon-possessed king set on overrunning Adara. Kallista must learn to control her wild magic and find the other Godstruck fated to join her. As she prepares for the battle of a lifetime, she finds not only the fate of Adara in her hands, but the secret wishes of her heart within her reach as well.

In this sprawling romantic fantasy, personal battles are mirrored neatly in large-scale conflicts. Kallista is a convincing heroine, torn between her sworn duty and her desires, and the men she draws are marvelous, larger-than-life characters, with complementary skills set in careful counterpoint.

In matriarchal Adara, Dayton has created an inventive mythology and culture. The ilian, a polyamorous family unit that forms the basis of Adaran society, is coherently woven into the fabric of the story, and the four unique types of magic are well thought out.

Court intrigues and romantic interludes keep the plot moving at a brisk pace as the final battle draws near. The story is brought to a stunning close, but fortunately there are more adventures planned for Kallista and her companions.

Demons are coming.
One woman has been chosen to face them…

Demon hordes still threaten the Kingdom while open rebellion has broken out within its cities, separating Kallista from her new family.

Assassination attempts, magical attacks–she’s surrounded by devastation unlike anything she’s ever known, and her unique magic power no longer works as it should. Yet her own pain must yield to the needs of her country, for this military mage is charged with searching the four directions of the world for the other ‘Godmarked’–the only ones who can help her keep demon invaders from shattering her world.

But can she find them in time?

“A fantastic series set in a fabulous world. Gail Dayton pens a story with characters who draw you in and sweep you away into an unforgettable tale of adventure in a land of magic and demons and danger. I want MORE!”

The Barbed Rose won the 2007 Prism Award for Best Fantasy! 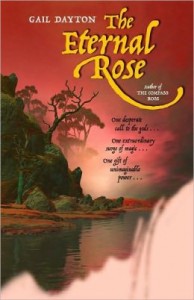 Six years ago, the demons behind the rebellion in Adara were defeated, and Kallista Varyl was selected the new Reinine. But one demon escaped, taking with it a part of her family. Now, finally, word has come that these missing family members might be found–along with the demon–in the homeland her mate Obed abandoned when he came to find Kallista.

She packs up the family for a state visit, but disaster strikes. One of the godmarked is murdered, leaving Kallista devasted. But there are children to rescue, slaves to free, and the wicked working of demons to set aright. A ninth godmarked must be found to make the magic whole, but Kallista will need more than magic to heal her this time.

The Eternal Rose… Some things do last forever…

“Don’t miss this book! Or the series! Fantasy doesn’t come any better than Gail Dayton and The Eternal Rose. Wonderful characters and a plot that draws you in and keeps you fascinated. I loved this book.”

“Treachery within the family, romantic tensions straining to the breaking point, betrayal running through the core of the ilian–I literally held my breath through whole chapters of The Eternal Rose, half afraid to turn the page and see what new trouble awaited Kallista Varyl. I loved the first two books in this series, but the emotional charge of The Eternal Rose blew me away. Gail Dayton has created a beautiful, unique world and family structure with her The One Rose trilogy, and has done so both unabashedly and to great effect. I only wish there were more books to come!”

The Eternal Rose won the 2008 Prism Award for Best Fantasy!