Alzheimer’s is a disease that continues to progress. And you just have to continue to cope.

It’s been almost a year since Daddy had to go to the nursing home, closer to a year and a half since he was told he needed to stop driving. Mama’s now failed her driving test. And she’s just as stubborn about refusing to stop. She completely missed a stop sign and a yield sign, couldn’t remember passing a school-zone sign…but she doesn’t remember any of it now, though she acknowledged missing them at the time. So, we will have to take away her car and keys. Sigh. 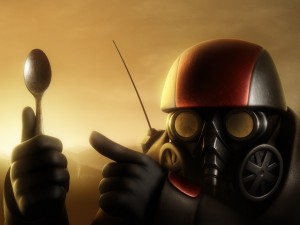 And, at the nursing home, Daddy has taken it upon himself to become the lunchroom police. One of the little old men there will shout out occasionally. And when he shouted the other day, Daddy got up from his table, went over and bapped him on the head with his spoon. (sigh)

When the staff remonstrated with him, he said “Well, he shouldn’t have yelled like that.” Totally justified in his own mind for smacking the poor old guy. So, we’re going to have to speak to Daddy–not that it will make much difference, because he won’t remember us saying anything, and he will still think he was in the right. The doctor will be spoken to–maybe up some of his medicine, and we’re probably going to have to start looking into dedicated Alzheimer’s facilities. He doesn’t wander, but he’s bapping the other residents. At least it was with a spoon…

So far, anyway, and I don’t have any reason to think it won’t go on being good.

I got my first review for Knight in Black Leather. It’s lovely, (5 stars!) and Christine Klocek-Lim is my new best friend.

(Yes, I am over-using the smiley face emoticon.) But it is a really nice review. See?


“I laughed out loud during the first chapter. I sighed in happiness by the seventh and bit my lip in dismay by the twenty-third (I also might have cried a little, but I refuse to get into that).”

I’ve been writing, but since I fell down on the job while I was out of town, and let myself continue to fall for a few more days, I’m only on Day 2 again. (Sigh)

Took Dolly the princess dog out for a walk yesterday, and she was a little pickle-dog this time. There were two doggies down playing on the beach, off-leash with their people, and it was all I could do to keep her from jumping off the seawall to go play with them. And that made her want to play with everybody else she saw. She’s five years old. Aren’t doggies supposed to slow down a little when they get that old? She dragged me across the street to wiggle at the neighbor. Pit bulls are strong doggies. And today, she’s been a real whiny-baby, wanting me to come out and sit with her or play with her, or something.

I’ve been trying out some new recipes–a Mexican skillet chicken that’s made like fried rice, only with enchilada sauce rather than soy sauce. Good stuff. And I made some marsala pork chops that were to die for.

I only made a couple of alterations in the recipe–you’re supposed to bread them in bread crumbs, but since the fella’s gluten-free, and I didn’t feel like crushing any Crispix or corn flakes, I just didn’t bread them. And I had a LOT of pork chops (or fork chops, as they’re generally known in our house, because that’s what one of the boys called them when he was little). Recipe called for 4 chops. I had 8 or 10. Hey, it worked. And I had some fresh mushrooms, so I sliced them up and threw them in the sauce. And I was probably a tad generous with the marsala wine. (The recipe called for one measly little tablespoon of marsala. A half cup of white wine (I used chardonnay), but only a tablespoon of marsala!) But when I got done–oh, it was SO good. My knees were all swoony.

Basically, you just fry up the fork chops, take them out, then saute a big mess of thin-sliced onion (with mushrooms if you want), add in a bunch of pressed/minced garlic, and when the onions are soft, throw in the wines and cook it down to almost nothing, then add in half a stick of butter. (No wonder it’s so good!) But you don’t need much with each pork chop.

Yes, I have been writing. This is the pantsiest thing I’ve written in a long time (meaning I didn’t really have my world-building done when I started it, and didn’t really know where I was going with it), but I’m discovering a lot of stuff now, near the end. Meaning I’ll have some things to fix when I start putting it in the computer. But that’s for later. 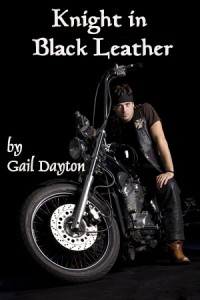 I have been busy, and I’m getting things done. I feel so accomplished today, and all because I baked a cake last night. (Well, sort of) But we’ll come back to the cake.

The big news is that I have taken the plunge into the e-pub business. My first Gail Dayton book has gone live both at Kindle and Smashwords, and as soon as I get a move on, I’ll have it up at Barnes & Noble.

Knight in Black Leather is the book that got me an agent. She and I both loved it, a bunch of New York editors said they loved it–but didn’t know how to sell it. This is a contemporary romance. I wrote it before I took the plunge into fantasy and steampunk. I love my fantasy stories, but I also love me some contemporary romance. It’s an older-woman-younger-man story, there’s some suspense, some family conflict, secrets, angst, old wounds–all sorts of good stuff. And it’s set in Pittsburgh. (The one in Pennsylvania, not the one in East Texas… That one doesn’t have an H after the G.) Here’s the cover copy:

A chance meeting on the dark winter streets of Pittsburgh brings widow Marilyn Ballard face to face with streetwise young biker Eli Court when he scares off a trio of wannabe gangsters. Later, she returns the favor, rescuing him from a beating, and their encounter becomes a chance to grow and heal from the pain scarring both their lives.

Marilyn’s family disapproves of the relationship because of Eli’s disreputable past, as well as their age difference. That past life–years spent in the deepest cesspools of the city–reaches out to pull Eli back into its depths, and he fears dragging Marilyn down with him. But she refuses to let him face his past enemies alone, even when his vow to protect a young boy exposes the still-open wounds of her heart, and puts them all in danger. Can they build a new life together, or will those long-denied secrets pull them under?

I hope y’all will give it a look-see. The first 2 chapters or so are up for y’all to sample. 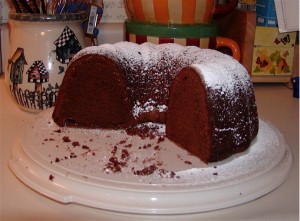 Now I can talk about the cake. It’s been forever since I actually baked a cake that didn’t come out of a box. The Mexican Chocolate Pound Cake from one of this year’s issues of Southern Living has been tempting me for a while, but I don’t usually bake, because I’m pretty much the only one who eats the stuff I bake (the fella can’t eat it, if it has flour in it, and the boy isn’t big on sweets), and I can’t afford it. But I really wanted to try this cake, because, hey–it’s Mexican Chocolate. And since I’m going up to check on the parents this week, I can take a big hunk of cake with me to share with them and not eat most (all) of it myself–I baked the cake. (The picture is not MY cake, but it’s the same recipe…)

The batter was like tasting chocolate clouds. The cake cooked in exactly the time the recipe said it would (this oven runs a little cool), AND it came out of the Bundt pan! I have been fighting with that pan since it was new, 30-mumble years ago when it was a wedding present. (35? Yeah, I think that’s right.) It does not often let go of cakes. It likes to keep back a good half of the cake, most of the time, and force you to scrape it out in pieces. But this one came out! Score!! 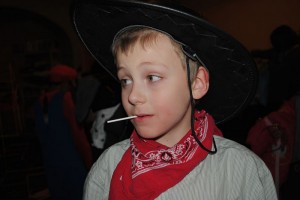 You’re supposed to serve it with sauce. Chocolate sauce–Mexican chocolate sauce, in fact. But the sauce requires heavy cream, which I did not have. So I had to run to the store to buy some. And since I also had to run to the store to buy ink for the printer to print out pictures of the grandkids for the parents, I didn’t mind so much, especially since Office Depot is just down the strip mall from the grocery story. I came out with lots of other stuff, too–fancy file folders, a file storage box, etc. And I just have to share a picture of one of the grandboys dressed up for Halloween. He looks like such a cowpoke… (That’s a lollipop stick!)