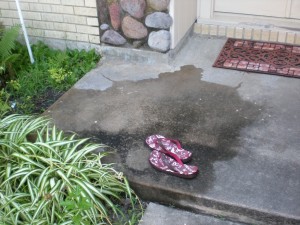 Those are the flip-flops I wear when I go to walk on the beach. I only wear them while I’m walking on the seawall before I climb down the stairs to the sand, or sometimes when I cross the rock groins built out from the seawall for wave control during storms. I carry them most of the time. But when I come back from my walks, they’re all sandy, and I don’t want to wear them in the house, so they tend to live on the front porch, waiting for me to come back and put them on again for another walk.

I usually walk in the morning, after breakfast, before I start working on whatever I’m working on that day. It’s a nice way to clear the head/commune with nature before having to focus and use the brain. 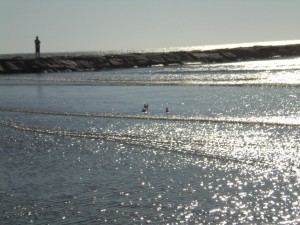 The seagulls have been sitting actually IN the water the past several days, I assume because the water is still warm. If you look, you can see the seagulls, and someone who’s taken the challenge of walking out on the rocks. People like to walk to the end to fish, but it’s not easy to get all the way out there, because there can be big gaps between the rocks, and they aren’t always level.

I’ve been dealing with parents earlier this week, and really needed a beach walk or two.

My parents both have Alzheimer’s, but it manifests differently in each of them, and is progressing at different rates. Because of some worrisome things that happened recently–Daddy losing his temper abruptly in inappropriate places, and having trouble remembering people–I made him a doctor appointment so I could go with them and talk to the doctor about these worries. I couldn’t figure out how to talk to the doctor without Mama and Daddy present, until I realized I could write a letter, which I did. The doctor had the nurse call me out, and we discussed the things I’d written, then I went back into the exam room first, and he came in after a minute. It’s nice that people with Alzheimer’s are as easy to distract as toddlers, because when Daddy started to get upset that I’d “snitched on him,” I was able to shift the conversation to how skinny they were, and whether Mama really weighed 112 lbs. (She didn’t–weighed in at abt. 126, but Mama is 5’9″ or 10″ even after “shrinking” so she really needs to weigh around 145.)

Anyway, the doctor really hammered in that Daddy needed to stop driving, No Matter What. We’ll have to take his keys, and maybe even disable the car to get him to stop, though. He’s got it in his head that he HAS to drive, and that he’s just fine doing it. He can’t remember who his granddaughter is, and gets ideas that people are beating on him, but he can drive. (ARGGHH) And, the doc wrote an order for a home health nurse to come by and check that they’re taking their meds.

The nurse came yesterday, and although Daddy was pretty crotchety the whole time she was there, it sounds like she’s going to get them all organized. Transportation when they need it, meals once a week at the rec center, check-ins about their meds, blood pressure checks–all kinds of things. I’m just tickled.

It’s still likely they’ll have to go to some kind of assisted living sometime in the new year, so we’re starting to talk that up, but we can keep them at home a little longer now.

I’m in a bit of a pother. Actually, I’m pretty outraged.

Money for hurricane relief was allocated to the Texas Gulf Coast–this is for relief of Hurricane Ike from TWO YEARS AGO. But the Feds fooled around and didn’t send the money for months and months, and when it finally arrived, the agencies helping the people who got Iked only had about 6 months to spend the money, while following all the red tape and guidelines of the Feds. The deadline could have been extended–and routinely has been for Hurricane Katrina victims and other disaster relief.

But ONE representative–a Republican from Kansas–somehow blocked the bill that would have extended it. With no comment as to why.

Once again, Ike is the Hurricane America Forgot. Just because Lehman Bros. went bankrupt two days later… Yes, Galveston is a smaller city than New Orleans. No, the flooding did not stay for week. BUT, 80 percent of the houses on the island flooded. (Mine was not one of them.) A lot of people are STILL out of their homes.

Don’t Americans deserve as much consideration as Haitians? Don’t Texans deserve as much help as Louisianans? Galveston’s pretty purple, as much Democrat as Republican. It’s about as bi-partisan as a city can get. Is that why this Republican cut off the grants? That’s $40 million my neighbors aren’t getting. Money they deserve and ought to have.

I don’t have a dog in this hunt. My house wasn’t damaged. We’re doing fine. But so many are not. Still. Cutting off the grant isn’t the way to fix bureaucratic problems…