I’m a little embarrassed, it’s been so long since I posted a blog, but we had some excitement at the house this a.m., and I can’t settle down until I talk to somebody about it, and I can’t get to my office where the e-mail is, and I’ve already talked to everybody around here about it…

We had smoke, but we didn’t actually have a fire.

We’ve been fighting with an air conditioner that doesn’t want to stay fixed for almost two months now (of course, in the hottest part of the summer–and it hasn’t been that hot of a summer…). The fella turned it off last night, because it had apparently frozen up, and when I turned it back on this a.m. (When are the dang hot flashes supposed to stop??), I smelled a little burnt smell, like dirt burning off maybe. Went on to eat breakfast, and about an hour after I turned it on, I smelled a serious, big burnt smell. And it looked kind of hazy, like maybe there was smoke. So I texted the fella that I was turning the a/c back off, and that it smelled bad. He called me back and asked about smoke, but I just wasn’t sure. Sometimes my glasses get hazy… So I walked around and looked, asked him to come home…and when I went to see if it was any worse at the attic access (where the a/c is), there was smoke all in that back hall. That’s when I called 911. 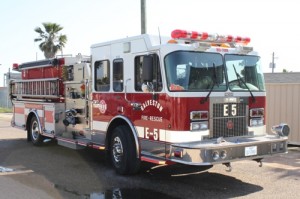 The first two policemen to arrive went in the house–I assume to make sure I was the only one home. (I was already out on the front lawn.) Then 6 or 7 fully turned-out firemen went in. I think they did finally decided it was something in the a/c that burned up. They opened up both units (we have one for the bedrooms and one for the front of the house), turned them off, turned off the breaker, turned off the gas lines running by–pretty much turned off everything a/c related that they could turn off. Three of the four trucks stayed until they’d checked everything and decided it was the a/c.

The firemen were so nice. They appreciated that I called them to come check it out, rather than trying to do it myself. They’d rather come out on a nice cool-ish, breezy day–and then not have to fight a fire… (Cool is a relative term in Texas, in August. It doesn’t start cooling off until October, here. But it might be 88F (31C) instead of 98…)

The repairman, Phil, came by and said it was the blower motor that burned up, plus the insulation inside the unit. They’re going to replace the whole thing.

In other news, the summer has pretty much been a bust, writing-wise. I figured out that from the third week in July through the third week in August, I either had company or was out of town (mostly wrangling grandkids) except for about four days. In which I pretty much lay around and ate bonbons. Or Cheetos. Whichever.

I discovered the e-book lending at the local public library. I’ve also been doing some freelance editing, and between the two of them, I’ve been inspired to get back to work, however. I’ve written one whole day in a row. I’m going to try to keep it going. Wish me luck. I’ve got a lot of work to do. And now that I’ve vented to the world–I shall remind myself to write a blog about the grandboy Mowgli’s “scary tumble,” and then get to that work. The windows are open and there’s a fan going, and I’ve kind of gotten used to working in 80F temperatures. It should be good.