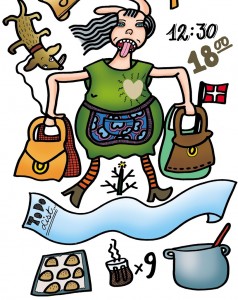 I’ve got a very busy month coming up. Between having to drive up to take my dad to his cataract surgery appointments and other stuff going on, I’m not sure I’ll have time to get my clothes washed. And the month will be capped off with a lovely colonoscopy on the 30th. Joy.

So, I’ve been thinking about things like coping with being tired, and trying to get the writing done along with all the regular stuff, and about having fun too, because some of the things I have on my schedule are fun. And then I’m thinking about writing and thinking “That should be fun, too.”

It’s really hard for me to write when I’m not having fun. And the stuff I write is no better than pedestrian. It’s not good writing, it’s just kinda going-through-the-motions writing.You may motivate yourself through a fear of failure, or a drive for success, and that’s great. For you. Me? Not so much.

So it’s important for me to figure out how to grab hold of the joy that writing was for me back when I first started writing. I’m one of those people who wrote her first story when I was still in elementary school. I was reading a lot of animal stories back then and the one I wrote was about a cat, I think. It was about playing make-believe, but a more intense kind of make-believe. One with more detail. And it was all about the story.

I was having fun when I wrote those stories. Once, when I was telling my fella (who is in the community college business) about a novel-writing class I was teaching, and about the writing exercises I had the students do, he said, “And they do them? They write? Voluntarily?”

Apparently, there are a lot of community college students who don’t see writing as fun. It’s more of a chore, to them. But to me, it’s fun. Really. It is.

I just have to remember that. And maybe rest up when I get tired. It’s hard to have fun when you’re falling asleep over the keyboard/paper. 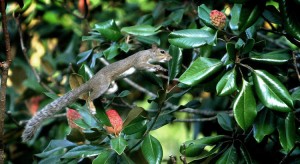 It did rain today. I thought I’d miss my walk this morning, but the rain was over in a couple of minutes–on my end of the island, anyway–so I got out and walked. It rained after lunch too–really hard, for longer. Maybe half an hour. And then it moved on, and I went to the grocery store without getting wet. I was out of cereal. 😉

This is a great time of year here on the Gulf coast. It’s still hot–though it was down below 80F/26.7C early this week, which can feel darn cold when you’ve been at 90F (32C) or hotter since May! The magnolias in the front and back of the house are getting lots of ripe cones on them. Our yard magnolias bloomed like crazy this year, so lots and lots of cones. The picture I found had a squirrel in it–squirrels and birds love the seeds on the cones. They also like the –I guess they’re dates on a neighbor’s palm tree, but they’re not the kind of dates people eat. They look like little fibrous dates, though, and they grow on a palm, so they must be related. It’s high living for the birds this time of year.

All the seabird babies are getting big enough to go out and find their own food. I saw an actual Vee of pelicans this morning when I was walking. Usually pelicans don’t fly in vees. They seem to be always in straight lines–unless there are lots and lots of them flying together, and this group had 30 birds. Usually, they’re in lines of a dozen or less, but 30!! Might have been more–I was counting really fast. I saw a baby laughing gull this morning too. The babies are as big as their parents this time of year, but their feathers are still brown, rather than gray and black. The white’s coming in, but not the gray.

I went to see the parents at the end of last week. Daddy’s cataracts are apparently pretty bad–he’s very uncertain in his walking, especially going up and down steps, because he just can’t see where he’s going. He sticks close to the wall and holds onto the handrail for guidance–which is better than just blithely strolling down the middle of the hallway. If the doctor thinks he’ll leave his eye alone after the surgery, we’ll probably have at least one eye operated on. He just can’t be picking at it afterward, and since he won’t be able to remember he had surgery, it’s an issue. Still, he hasn’t been picking at his face lately, so maybe he won’t. Mother’s about the same…she’s starting to read her books over again because she can’t remember what was in them. But I read books over too, so– I do it because I can’t remember if I’ve read them before or not, and then I read them and realize–yes, I’ve read this. Oh well.

I’ve been writing a little bit. I’m kind of in a “what do I want to work on now” situation. I’m not sure what I’m in the mood to write–and unfortunately, right now, I seem to have to be in the mood, or nothing gets done. So I’ll think a little and get out files and re-read a little and see what strikes me. Maybe I’ll clean up my desk too.

Okay, so I spent the first week and a half of August helping the daughter and son-in-law move from Pennsylvania to Georgia. I was the grandkid wrangler and the relief driver.

The wild child–aka Mowgli–is 9 years old now, and doing pretty well with his autism, as long as you keep him busy. His parents prepared him really well for the move–by the time we were packing things up, he was mostly worried that we might not get the basement television in a box. We found him trying to pull it up the stairs by its electric cord…

Rocket Girl is 18 months old, and very busy too. When the movers came and we were desperately throwing things in boxes as fast as we could go, she got her own little shoe-box-sized cardboard box and carefully put Bob the Tomato, a book and a stroller toy in it. She was packing too.

So, we drove to Georgia–a day late because one of the cars broke down and had to spend a day in the shop. Then the same car wouldn’t start after our overnight stop in Virginia–but after we jumped it off, it started every time after that. (Turned out, the connectors were bad, not the battery.) The daughter didn’t make orientation for her new job, because of all the car issues, but we got there before school started.

The new house is down a slope from the street–a fairly shallow slope with a straight driveway, and a parking area at the bottom. Then the lot drops steeply down to a really cool creek behind the house, with a curb at the edge of the parking area to keep cars in place. There’s a bridge over the creek, and wild child spotted it immediately. He loves that creek, and that bridge. When she was house shopping, the daughter described this house to me as “The Calvin & Hobbes house” because it’s the kind of house C&H would have loved–the back yard slope is one of those Calvin would go sledding down, complete with “terraces of death.”

When the movers arrived, Mowgli was anxious to get “his” television out immediately, and so climbed up in the cab of the truck. Three times in 30 minutes. His mom took him bicycle riding around the neighborhood to distract him. When they got back, she watched him pedal around the moving van, watching the car coming down the street, to make sure he was careful. Then when she got around to the end of the van, she saw him riding his bicycle down the driveway. And apparently he forgot about brakes.

Mom’s hollering “Brakes! Brakes!” He’s going faster and faster. The movers are yelling. And Mowgli speeds across the parking pad, hits the curb and goes airborne. He landed about five or six yards down the hill.

He got a bad bruise in his crotch, and tire tracks across his forehead. The bicycle fork got bent. Other than that, he was fine. And the next day, as we went out the garage to the scene of all the excitement, he informed us that we needed to be careful of “the scary tumble.” That may now be the name of the hill…

I stayed in Georgia a few more days, long enough to get Mowgli registered for school and go out to meet his teacher. And now life goes on.

I’m going to be doing some traveling this next month, getting Daddy’s cataracts seen to. He apparently doesn’t remember how he’s supposed to see, so he doesn’t realize that he can’t see now. But I do have time for writing, between trips to Austin. I’ve been very good and written every day this week. Even when we had our fire adventure.

I took a half day (after writing) and went shopping yesterday. I am now outfitted from the skin out, head to toe. I bought a new hat, shoes, draws, jeans and shirts. I bought a present for my niece’s wedding shower–but the shower is on my birthday, so while I’m going up there sometime next week, I may not stay through Saturday, because the shower is so late in the day. If I come home, the fella will take me out. We went out to Benno’s on the Beach for his birthday today. For the next week, the fella will be older than me. 😉

Which reminds me. I need to go get my driver’s license renewed. At least they’ve reopened the DPS office on the island, after our last hurricane.

Surf’s up this weekend because of Isaac, but fortunately, that’s all we’ve gotten from it. Y’all take care.