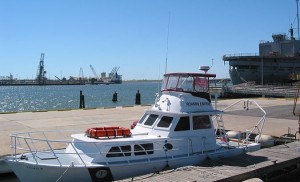 The harbor cruise was fun. We took the motor-powered cruise. Big ol’ boat that A&M uses for marine research of various kinds. Just six of us on the boat with “Captain Jim. ” Basically, we went down the harbor to the ship channel and back, didn’t go out in the bay at all. Lots of interesting stuff to look at. (This is the “other” boat, very much like the one we’re on. Took the picture while we were pulling out.)

We saw lots of cool stuff. The local cruise ship, getting loaded up for another Caribbean cruise… 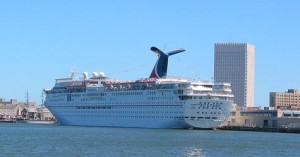 We saw the “tall ship Elissa,” from the water. Elissa is a museum herself, and also a working sailing merchant ship. Locals volunteer to sail her and keep her ship-shape. 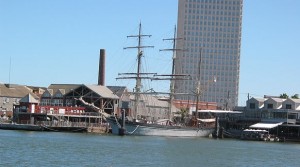 There were also cargo ships unloading tractors and shipyards that didn’t look like they had any ships to work on. I think one of the shipyard things was still under construction. Besides all the big ships (including Coast Guard cutters and ferries and barges), there were people out fishing. Apparently it’s about time for the flounder run to begin and folks were everywhere, on the bank and in boats, catching fish while all these huge ships were pulled up to dock right across the water from them. 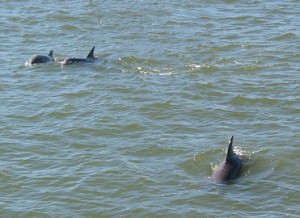 But the absolute coolest thing we saw while we were out cruising down the harbor was the bottle-nosed dolphins. A whole pod surfaced right in front of the boat–six or seven of them. I couldn’t get but three in the same picture–they were pretty far ahead when the big bunch surfaced, and not all of them came back up close enough for me to take their picture. But they were right there in the harbor along with everything else, swimming around like there were no ships or fishermen. Cool, huh?

And then we went to see Elizabeth: The Golden Age, because I’d been wanting to see it, and it was totally worth going to see. Loved the clothes…

Sunday, we got tickets to the Grand Opera House to a concert, and decided to go to that, since Moody Gardens–which was having “Free Day for locals” will be there next year (or whenever) and the pianist won’t be. The music was great, but Sunday afternoon is not a good concert time for this girl. Sunday afternoon is Nap Time, and I kept falling asleep in that dark theater, at least through the Brahms. I did stay awake for the Mussorgsky Pictures in an Exhibition–just because I like that music a lot.

There were a whole bunch of other things going on over the weekend…a bicycle “ride around the bay” benefit thing, I think a breast cancer walk, an art festival, I think there was also a jazz festival…and we just couldn’t get to all of it. (A couple of the cyclists got hit crossing the causeway, even though they had two lanes blocked off just for the bicyclists…)

So now, it’s Monday. Worked on White Elk this a.m., got the latest version of chapter 1 in the computer and sent off for critiquing. Hopefully I’ve added in enough emotion that it will work. Hopefully. 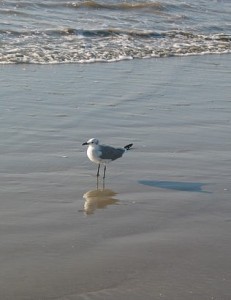 Beach Report: Went back out to walk this morning. They’ve been predicting a cold front for today since last week, but you couldn’t tell it by my walk. It was 81F (27C) when I got to the seawall at 8:30 a.m. And there wasn’t a lick of breeze anywhere. I have NEVER been on the beach when the air was so absolutely still. It was hot, walking this a.m.

Because it was Monday, and the beaches got groomed for the weekend, most of the seaweed was gone, unless it got washed up right next to the seawall. I saw a couple of chunks of floaty, crinkly kind. (Guess I ought to take a picture of that, too.) A few shells, more rocks, and a whole lot of rocks right next to the fishing pier.

But I saw something I’d never seen before, completely new for me, and totally cool. I guess it washed ashore because it had broken off something else. It was a chunk of hard, clear plastic pipe about 2 inches in diameter, with a metal plug on one end that had been completely covered three-quarters of the way around, and over the end with some kind of little mussels or clams. Each shell was about thumbnail sized, and attached to the pipe by some kind of…neck, or stem. Kind of an icky, fleshy, ribbed, dark brown stem. The shells looked thin, and they were triangular shaped, with rounded points, white with dark orange edges. Looked sorta like mouths with lipstick on, because the shells were all open, some with little critters sticking out.

I thought about bringing it home to take a picture of here, but the critters were still alive, and when they died, they would sure stink. So I tossed them back into the water (they washed back out again) for the seagulls to eat, if they ever figured out they were edible. (Maybe they aren’t. I don’t know.) The seagulls weren’t messing with them when I first saw it. It looked sort of like a rhythm-band instrument–a stick with little castanets stuck all over the outside to rattle together. It did rattle when I picked it up, as the shells clacked into each other…

So, anyway, that was the cool stuff I saw this morning.

Then, sometime later this morning, the wind swooped in out of the north, blew over the rubber tree and the purple ginger (I did pick them back up), and brought in the cold weather. By 2:30 p.m., it was 63F (17C), and blowing like crazy.

I may have to go out and check the beach at low tide tomorrow, see if anything cool can be found. We are told that this is the time to go beach-combing, because the wind pushes the water way out, and all sorts of things turn up on the sand…

One Response to Wild Weekend