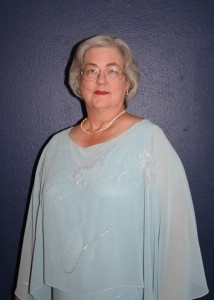 So we went to the party. This is me in one of my new fancy dresses. I like sparklies, and there are sparklies all the way down the front of this dress.

The invitation wasn’t real specific about where the party was–the hotel and convention center is a pretty big place, and we had to hike through the hotel till we found the right ballroom. I actually remembered a few names of people I’d met before, and even recognized who went with who even when they weren’t next to each other. I’ve met a dozen or more women named either Carol, Carolyn, Caroline or Karen… at least it seems that way. Makes it easier to remember names. I can just come out with a Kar–and mumble an ending, and they’ll think I remember. I’m so bad at names, I don’t mind at all being introduced as Grace. 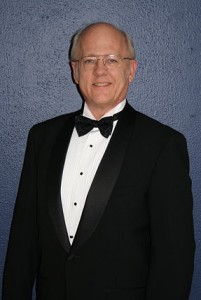 Grace was actually my nickname in college, because I was so good at tripping over cracks in the sidewalk and getting run over by rampaging Weimeraners and losing my balance and falling into people and stuff. If somebody was going to mix my name up, that was probably a pretty good one to stick on me.

So, here’s the fella in his brand new tux. Someone told us at the party that the island is actually a two-tux town. I suspect we’re not rich enough for the two-tux level, but his position is a pretty political one, so we may get that many fancy-dress invitations. We’ll just have to wait and see. The guys were mostly in tuxes, but the ladies were all over the board–some in cocktail dresses, some in fancy dress pants, some in long dresses. I’m just grateful I didn’t drape my sleeves in the food… 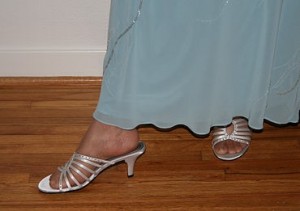 And yes, I have to show y’all my shoes. I got really excited about finding a pair of shoes that would actually go onto my feet–and I found them at a Department Store! Usually, department stores don’t carry anything that will fit me, (wide feet, high arches) but I could get my feet into these, they didn’t hurt any more than any other shoe, and they didn’t cost a bazillion bucks. They have sparklies on them too, but the sparkle doesn’t seem to show up in the picture.

While we were at the fancy party, before dinner started (beef wellington and a really great red and yellow tomato salad), we got invited to go on a boat excursion this afternoon, and since we had no other commitments, and we like boats, we jumped on the invite. I’ll try and get back to let y’all know how it went–and I will take the camera for more pictures. I really need to get back to my painting… (Pictures=stuff to paint, so when I think about pictures, I think about painting.)

It sounds like all I’m doing is running around and going to parties–and I’m doing a lot more of that, for sure. There’s lots of stuff to do here. But I am still working on stories and writing. I got quite a bit done yesterday–finished character interviews and re-wrote the opening. Now I need to get it typed in and merged with the rest of chapter one, and ship it off for critique at next weekend’s writers’ retreat. Except I have to go on this boat ride. And tomorrow afternoon, we have tickets to a concert downtown at the Grand Opera House. (Need to try to take a picture of the inside there…) Anyway, this one is a contemporary urban fantasy romance with the various cultural mythologies merged and mixed together. Tentatively titled White Elk Red Sword, but I’m also considering something like The Shaman and the Warrior Princess… anyway.

Beach report: Went walking with the fella this a.m., and since he has no flip-flops and I like to walk IN the water, we drove down to see if Academy was open (wasn’t), and walked from 45th street to about 27th and back, instead of from 61st to 53rd, like I usually do.

Gorgeous weather–not a cloud in the sky, nice breeze, water pretty cool. More shells than rocks on the beach, but not many of either. After we crossed the 3rd jetty, there was a whole lot of seaweed of both kinds (crinkly-leaved floater and big-stemmed with roots). We’re waiting for the first big norther to blow in and push all the water way out so we can really go shell-hunting. Seagulls, pigeons, little bitty sandpiper/pipits. Saw a big sandpiper/stilt (I have Really got to go get my bird book.) with only one leg hopping away from us. And just as we were about the climb the stairs back to the car, we saw an egret fishing. Going to have to break out the long-sleeved shirt and hat and sunscreen for the harbor tour this afternoon…

I really am appreciating all the “Book sighting” reports. I had a sighting! I went across the causeway into town for the RWA meeting last Tuesday (listened to Sharon Mignery do a great workshop on Conflict), and stopped off at the Barnes & Noble, and there they were! THREE copies of The Eternal Rose and one of The Barbed Rose. So I signed them. Didn’t have any stickers…I’ll take some next time I head into town–which might not be until the next meeting, but that’s just the way it is. So. Thanks, y’all.