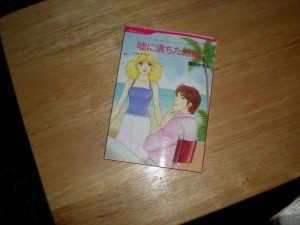 We’ve had a package at the post office (we use a P.O. Box for most of our mail) waiting to be picked up for better than a week, because nobody could manage to get by there during “window hours.” Finally, the fella went by to get it. It was a box from Harlequin, and I figured one of my old books had been translated into a new language. (Though seemed to me they’ve already hit most of them–Czech, German, Italian, Korean, Japanese (twice for one book), Greek, Spanish, Portuguese, etc. Maybe not Polish yet, or Hungarian–though I’m not sure.)

Anyway, when I opened up the box, there was one book inside. A manga edition of my 2003 book, Her Convenient Millionaire! (Yeah, I didn’t crop the image very well. Oh well.) 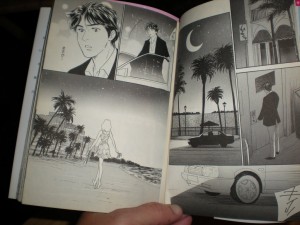 They had the beach scene and everything! There were people I don’t remember clearly–I wrote this book well before 2003, in case you didn’t know how slow publishing worked. And they turned it into Manga!

I have another picture to show, but I’m afraid I’ll wind up overlapping them. I haven’t tried to show this many pictures with this new “widescreen” format. 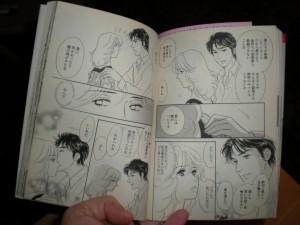 The other picture is from later in the book, after the “romance part” begins. Since this is Japanese manga, the love scenes are R-rated. (“Soft-focus” with upper body nudity. Does it count, since it’s just pen and ink?)

I also have a picture of a couple of the grandboys taken while they were visiting. I’m not sure who took the picture, because I did not pick my camera up Once the whole time they were here. (I know. I’m going to lose all my “good Gigi” credentials.) The boy in the picture took more pictures with my camera than I did. Pictures of his stuffed cow, and the electronic photo frame, and a fuzzy blanket. He did take a picture of his cousin. Pretty good one, except the kid had his hand in front of his face. Silly boys. 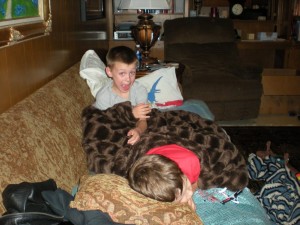 I want to do some recipes in a blog soon, but I want to take pictures of the process, which means I need to fix them again. For years and years, there was a restaurant the in-laws just loved up in Fort Worth, which served a chopped shrimp salad– Not salad greens with a few shrimp tossed on top, but tons of shrimp and celery and other chopped-up things so thick they served it in a mound, like it had been shaped in a bowl and turned upside down. Shrimp in every bite. We loved that salad. And when the restaurant closed, spent ages trying to figure out how to make it.

Well, I think we finally figured it out. When the family was down, we had a shrimp boil. (That’s one reason we have company. So we have an excuse to go buy shrimp from the fish market and eat cold boiled shrimp.) And we had leftover shrimp. And the dairy allergic boys can’t eat shrimp enchiladas. (We have three gluten-free eaters, two of whom are also allergic to dairy (one only mildly so, and one extremely so), and one additional non-dairy person in the family. It’s kinda nice that there are enough people to have double menus…) Anyway, with all the dairy allergies, we decided to make shrimp salad instead. So, one day soon, I will cook some more shrimps and make the salad, and post pictures with the recipe. And that’s just one I want to share…