Fun in the Sun

It’s August in Texas. That means it’s hot. Very hot. Extremely hot. As in– folks would pay a visit to hell because it’s bound to be cooler there hot. And the daughter, s-i-l and grandson came down for a week from Pennsylvania last week.

We did some beach going. The Dallas grandboys came down so the cousins could have a little time to play together. We went to “Slitherbahn.” It was no harder keeping up with the autistic kid than the other two–they all wanted to run off and do their own thing. The second time we went to the beach, there were itchy things in the water. We thought at first it was seaweed–but there was less seaweed (sargasso) than the first time, so maybe not. Then we fished some of the itchy things out of our swimsuits. It looked a little like tiny speargrass–maybe the size of a mustardseed. Round, with spiny things sticking out, and kind of clear, but not. Then, I got to wondering if it might be alive in a different way–like maybe tiny baby jellyfish or something… About this time, the daughter pulled out another one of the itchy things and looked at it–and yelps because it has pinchers moving around. Pinchers! Like maybe crab claws. Like the itchy things were tiny, transparent, baby crabs.

I have since looked up crabs and such, and apparently blue crabs (and possibly others) have a tiny, mustard-seed-sized, transparent phase. There are many blue crabs in the Gulf of Mexico, as well as stone crabs and others. So we all had (probably) tiny little crabs up our swimsuits. Needless to say, we did not stay in the water long for our second trip. (The water wasn’t as warm either… Not like bathwater trip earlier.)

We also went for a ride on the Galveston-to-Bolivar Peninsula ferry. It’s free, and if you walk on, you don’t have to wait in line. There’s a high observation deck where you can go inside and stay cool in the a/c, or you can go outside and stand in the wind (strong enough to knock me down that day) which helps with the heat, and watch for dolphins. 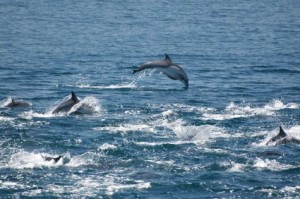 And we saw them. On the Bolivar side, there must have been a big school of fish, because the birds were swarming the spot. And so were the dolphins.

Too many to count–we guessed we saw somewhere around 20-plus. They were moving too fast to count all of them–and yes, it was obvious that it was that many different dolphins. They don’t move that fast. And they were all sizes, including some obvious babies. I saw them jumping out of the water–I saw a trio horsing around, with their noses up out of the water–head up type jumping, and some of the others with bigger-than-usual curving jumps, so their entire bodies came up out of the water, not just their breathing holes and fins. It was SO COOL. I have never ever seen that many dolphins at once.

Most of them surfaced in pairs or trios. I actually have never seen a dolphin swimming alone. I guess they follow the “buddy system.” (You know, like Boy and Girl Scouts–you never swim alone, always have a buddy, and always know where your buddy is.) It did make us wonder whether we had more dolphins because of the oil spill, because we haven’t had any oil “upstream” of the Gulf current. The picture is not one we took. I forgot my camera. In fact, I did not take A Single Picture the whole time the grandkids were here. (I know. I may lose my “good granny” status. But I was busy playing with them!) The daughter may have gotten some pictures. I hope so, but they were kind of far away, so maybe not.

I have a new computer, but since I’m on jury duty this week, I’m having trouble getting everything loaded and set up. Sigh. But I’m working on it.

I spent all morning today in a county courtroom for the jury questioning (voir dire), knowing I wouldn’t get picked, because I was sitting on the last row. I’m still apparently “on call.” I have to call a phone number when I get home to see if they need me tomorrow. If I make it through till Friday, I’m off duty. Wish me luck.