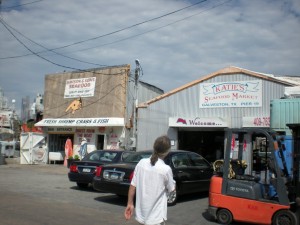 So. I’ve been wanting to make that yummy shrimp salad again. I almost bought frozen shrimp at Kroger, but the fresh ones are so much better–and I’ve been in there mornings to see them opening the Exact Same bags of frozen shrimp they have in the freezers and pouring them onto the ice in the “meat market” area. Therefore, this morning, I got in my bus and drove down to the fish market.

Yes, the two markets at Galveston harbor are right next door to each other. And just to the right of Katie’s (where I bought my shrimps) are the shrimp boats. Some of them anyway. More of them are farther east. 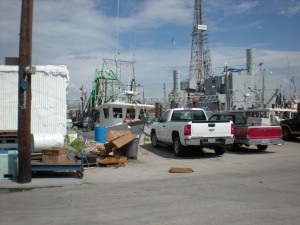 We are in Texas. The oil spill has not come this direction. We have had no oil, no dispersants, none of that mess. The seafood here is Just Fine. Excellent, in fact. Just FYI. 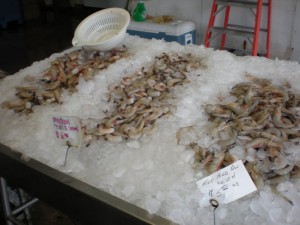 Today, I forgot my ice chest. It’s better to take an ice chest with you to buy fish and shrimp, because then you don’t have ice melting on your floorboard while you drive home. Anyway, the first job in fixing shrimp anything is to select your shrimp. In the front, you have your medium sized “head on” shrimp. They’re usually a tad cheaper, but you have to pinch the heads off. (This kind of “pinch” is pronounced “peench” which is the correct Southern pronunciation for something vicious enough to take the head off a shrimp, or make your little brother squeal in church. A pinch of salt is just a “pinch.”)

I hate pinching the heads off shrimp, because they have these poky spine things that stick out in front, and they stab me. Also, I don’t like shrimp hairs. You get a few hairs in de-headed shrimp, but not enough to comb. So, I bought the medium-sized shrimp in the middle–30-35 shrimp per pound. The ones in the back are the extra large (11-15 per pound), but they’re not as good for a shrimp boil, and would require a Lot of chopping for salad. (Also, they’re about $5 more per pound.) The large shrimp didn’t make the picture. They’re about $1 more, and today, they were the pink Gulf shrimp, instead of the “brown” Bay shrimp. They didn’t look enough bigger to make me want them. I bought four pounds, because when I mentioned making shrimp salad, the fella wanted cold boiled shrimp for supper. I mean, if I was going to the fish market anyway, I might as well buy enough for supper too, right? 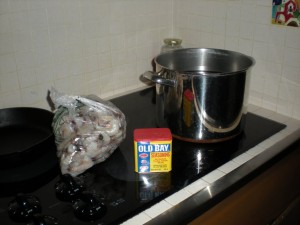 The first thing you do, whether you’re going to eat them plain, boiled, or make them into a salad (or into enchiladas or sundry other things), is to boil the shrimp. 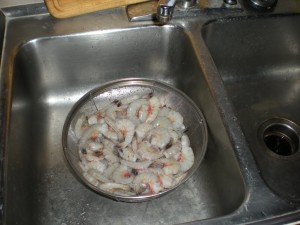 For this, you need a big pot, with lots of water, some “shrimp boil” (we like Old Bay seasoning), and shrimp.

I like to rinse the shrimp before I put them in the pot to cook. You don’t necessarily have to do this, but I did. You can maybe get a better idea of their size and color in the “rinse” picture. It’s something to do while you wait for the water to boil, and gives you a chance to pick out any stray shrimp hairs that might have got into the bag. 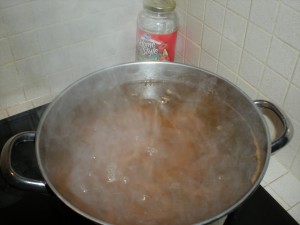 Shrimp don’t take very long to cook. I add the Old Bay (or other) seasoning to the water when I put it on to boil, about a tablespoon for every couple of pounds. The fella likes more, but I think that’s plenty. 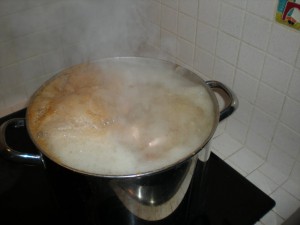 You’ll want to get the water to a really big rolling boil, then dump the shrimp in all at once. It will stop boiling, and the shrimp will all sink to the bottom of the pot. You can sort of see them in this picture, despite all the steam. They’re done when they float, and turn pink. Generally, that’s about when the water comes back to a rolling boil, and boils over. 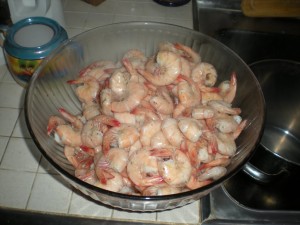 So you have boiling water, and floating shrimp, and they’re pink. It’s time to take them off the heat. Pour them carefully into a colander in the sink–I haven’t burned myself yet in this process, but give me time. This is me. Run some cool water over them–this is problematic here, since our cold water is mostly lukewarm this time of year. Then put them in a bowl–our big one is glass, but plastic works just fine, and metal probably would too.

See how pink they are? Since these shrimp were brownish-gray to start with, they turn a more delicate pink. The Gulf shrimp start out about this pink, and get a really bright pink when they’re cooked. Almost neon. 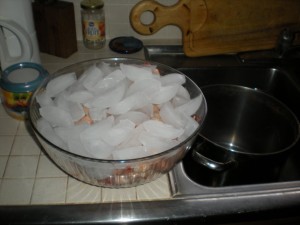 So then, you pile ice on top of the shrimps and stick them in the refrigerator until you’re ready to eat them. We love to have people down to visit, because it gives us an excuse to have a shrimp boil. We do “peel-your-own” shrimp dinners. The first time the youngest boy’s girlfriend came to eat with us in Galveston, she had never peeled her own shrimp. We had to teach her how.

The easiest method is to grab their legs and peel one way around the back of the shrimp, taking off as much of the shell as you can. Usually, it breaks off at that tail joint–the one restaurants leave on. Then you take hold of the tail, squeeze that tail joint shell just a bit, and gently pull, to pull all the good meat out of the shell. If that method doesn’t work, just wrestle that sucker off the best way you can. Set out bowls at every place to hold the shells, and have lots of napkins handy. (You can buy bottled cocktail sauce, which I like just fine, or you can mix your own with ketchup, horseradish sauce and mayo.) Corn on the cob goes real well with a boiled shrimp meal, also cantaloupe and sliced tomatoes.

Our youngest grandboy is six. He’s loved shrimp since he got his first ones at his first birthday. He is just now learning how to peel his own, but can’t peel fast enough to suit him. Dad still has to help. His big brother doesn’t like shrimp. (He’s the picky eater in the family.) Won’t touch them. We don’t mind. Just means more for the rest of us.

I’ll take pictures of the salad making when I get there, but this is obviously step 1.