I mentioned before that my mother-in-law loved this shrimp salad from a now closed restaurant. Occasionally, we get a salad that’s sorta similar, but usually, no. So we worked to try to recreate it, and I believe we’ve gotten close. It’s mighty tasty, at any rate. And I’ve promised to share. So here it is.

I started with my leftover shrimp. I had lots. I bought 4 pounds, and we might have eaten half of them. Maybe. This was less than I had for the first salad I made, but still probably more than we really needed. Amounts may be adjusted according to your taste, and to how much shrimp you have/how big a salad you want to make. This makes a great main dish–but the fella likes to have it “on the side” as an actual salad. (I think he’s silly.) 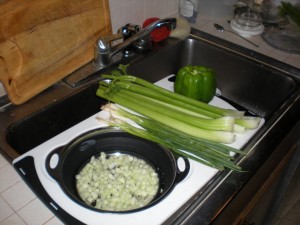 So. Shrimp. At least a pound, boiled (or steamed in the microwave–whatever).

Then, you’ll want: celery (this is the majority of the salad), cucumber, green onion and green bell peppers. I peeled, seeded, chopped and salted the cucumber, (I used a whole one) then put it in this colander to drain. When I made this before, I didn’t do the salt-and-drain thing, and the salad got a little watery. Draining it helped. It takes a while to do all the peeling and chopping, so if you do the cuke first, it’ll have plenty of time to drain.

I used 5 celery stalks for this salad. I used more for the first one I made. The tender heart of the celery is the best in this, but I didn’t use it in this salad. It was still good, and I don’t even like celery, which I may have mentioned before. I like it in this, though. 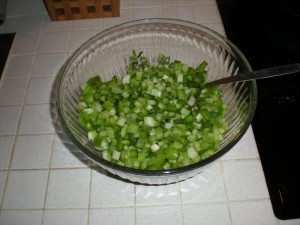 I used 5 green onions–all of them, end to end. The green parts are really good. And I used about half the bell pepper. I used less in the first salad, and could taste it more in this one. I like bell pepper, so I liked the “more.”

I may go for an “English” cucumber next time. Those are the really long cucumbers sold wrapped in plastic wrap. I think more would have been good, and the English ones are supposed to have fewer seeds and maybe be a little drier. But I just used one whole regular cucumber. 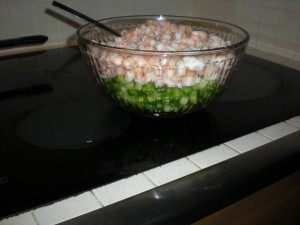 I chopped everything to a fairly small dice, maybe 1/4 to 3/8 of an inch. I peeled and chopped the shrimp after I did all the vegetables. It was really pretty, I thought, when I piled it on top like this.

But we are not done. This is not a layered salad. This is a scoop-it-onto-your-plate-in-a-mound salad. It needs the dressing, and then to be all stirred up.

The dressing is like for a tuna or chicken salad. Mostly mayo. (We use real mayo, because of gluten issues.) You have to judge the amount according to how big your salad is. Everything is adjustable in this salad. 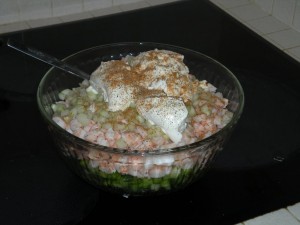 I used two big spoonfuls of mayo, and then added another couple of little spoons of sour cream. (This is a big salad, people.) I seasoned it with a little salt and pepper and a good dusting of Cajun seasoning.

I could have used a ton more, and probably still have barely tasted it. I could scarcely taste any spice at all. All those vegetables, I guess. The shrimp are naturally salty, and I did cook them in the Old Bay. But this is a very mild-tasting salad.

You could probably experiment with seasoning–but the vegetables and shrimp are all so cool tasting, I don’t know that you could change that very much.

At this point, I’m sure you know the rest: Stir it all up, and eat it. You might want to stick it in the refrigerator a while to let the flavors blend, but they blend pretty good from the very beginning. 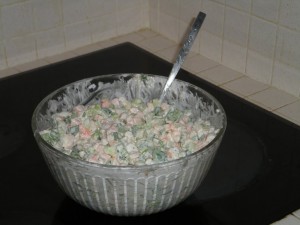 I also imagine that you could do this in a food processor, if you’re careful not to puree things. I think the restaurant had smaller chunks of food, and it did take me a while to chop all this stuff up. (The first time, I had the fella peel and chop the shrimp for me.)

It took us three days to eat all this salad, and there were four of us eating it. Of course, until Monday (Labor Day) lunch, we didn’t eat it as a main dish for the meal.

Yeah, it looks a lot paler, not so pretty and colorful, with the white dressing stirred all into it, but take my word. This is really good stuff.

My foot is almost well. I’ve been out walking the dog twice this week, but I let her walk around the neighborhood with me off leash. She’s been very good about staying with me and not trying to leave the street. I let her out of the backyard the other day to run while I brought the trashcan in, and she was so cute. When I had the can in the back, but the gate still open, she came and peeked around the corner of the house at me, just to double-check I was there, and maybe to see if I was going to make her come back. She saw me look at her, and dashed back to the front yard, in case I might call her. She came back to check on me again, before I got back out front to watch her. She stayed in our yard, except for running across the street to see if Tony (the owner) or Sheba (the dog) were home. Tony loves Dolly the princess pitbull. Sheba tolerates her. So she’s allowed to go in Tony’s yard. As long as she’s a good doggie, I’ll take her walking with me. We both could use the exercise.