It was a wild weekend in Dallas/Fort Worth with all the in-laws, kids, grandkids–the whole horde. We were celebrating the fella’s parents’ 60th anniversary. The nephews were back from Australia–the one in grad school down there has finished his Master’s degree in oenology biochemistry, and brought back wines he’d made. (Very tasty.) His brother just went down to visit. The daughter also came with her family from the “frozen Northland” (aka Pennsylvania), including the escape artist (aka her son).

That kid is really fast! The in-laws’ house, where we were staying, backs up to a big park, with baseball fields visible from the house and a playground beyond them. Several times during the visit, Mowgli (he has autism, and occasionally behaves as if he were raised by wolves) would take it into his head that it was time to go to the park, and zip! He’d be out the door and dashing for the gap in the fence. And he was often faster than the adult chasing him, so his Mom would have to go out and yell at him and make him come back. I foresee a track star. If the coach can convince him to actually run on the track, and wait for the starting gun/bell to start running. Honestly, he was very good during the whole visit, except for one or two escape attempts. That’s not bad for a week’s visit not even at his own Gigi & Granddaddy’s house.

We celebrated Thanksgiving, then we celebrated the anniversary. The daughter got everyone to tell a family story. (“Dad–we need a broom, and a bandaid.” and “New constitutional amendment about green beans.”) We took all the grandboys to the zoo where everyone had a great time. We took the little boys to see “Tangled.” It went over well, once the action started. (The opening was a little talky.) We raked up a century-old pecan tree’s-worth of leaves (plus I saw a few oak tree leaves in there) and let the boys jump in them. One tree made a ginormous pile of leaves. We even did a little Christmas shopping. 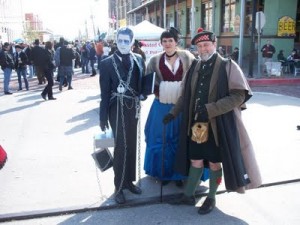 Now the older son has come to the island for a conference. We’re going to Dickens on The Strand tomorrow. It’s basically a street festival to celebrate Galveston’s historic Victorian-era downtown, where people dress up in Victorian era costumes, pirate costumes, and even costumes from Dickens stories (like Jacob Marley from “A Christmas Carol”) and hang out downtown. They’re having steampunk stuff this year, along with the usual parades, street urchins, bed races, mummers, etc. I don’t have a costume, but hey–it’s fun. (I have stuff to make a costume, but… Good intentions and all that.)

Can’t get into my office right now, with guests in town. I’ll start revisions on… Sunday? Sounds good to me.