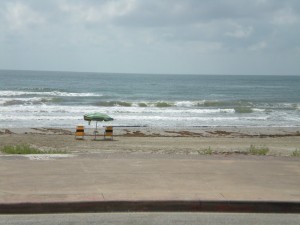 It’s summertime. Summers can go fast, and they can go really, really slow. Sometimes both at the same time. It’s like your brain slows down in the heat (and believe me, it can get REALLY hot here), and the world slows down too. And yet, there’s more stuff to cram in those slow, leisurely hours. People coming to visit. Going to visit people elsewhere. Etc., etc., etc. It’s exhausting. (The picture is my Twitter icon picture–it’s from a while back, but the beach is pretty much the beach…)

We have deliberately not filled up our summer. I’m not even going to the RWA national conference this year, though I went every year for a while there. It’s so exhausting. This year, we have the Dallas grandboys coming for a week of Seacamp (Texas A&M-Galveston has a fabulous program). This year, we signed them up early enough to get into Pirate week. (Arrrr.) But if their father doesn’t get their paperwork back pretty darn quick–I may have to spank him. Or something. Anyway–that’s pretty much all we have scheduled.

And I still haven’t made it into the water yet. Beach-type water, I mean. The wind’s been kicking up pretty strong, which makes the water rough, and dirty. I keep waiting for it to glass out for me.

Oh hey! It RAINED today. This is big news, because it hasn’t rained here pretty much since, oh, October. (That one little thunderstorm doesn’t count. One rainfall in 8 months? Nope. Doesn’t count.) Of course, I left the dog outside, and can’t get the boy up to go let her in, and she panics like the princess pitbull she is. So who knows where she is right now. Hopefully, she hasn’t eaten another hole in the fence…

Oh! I started writing something new yesterday. It’s been a while since I’ve actually worked at writing anything, so it’s kind of exciting to be interested in doing something new. I’m going to give this 100 words a day thing a try again. I did get 100 words yesterday. I’ll have to report back today.

Y’all take care, and I hope you’re having exactly the kind of summer you want.