Holy crap, y’all– I have used Tarot cards in my writing before. A lot. I use them to do character readings, so I can look deeper into my characters. I use them for GMC (goal, motivation and conflict–but y’all know that, right?). But I do not think they have EVER done such an amazing job for me. 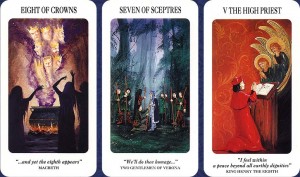 See, after I wrote on Thursday, I took a hard look at my story thus far, and realized it sucked. I have a great premise, but I really didn’t have an actual story. No plot.

So I pulled out my Blake Snyder Beat Sheet–which first I had to find in one of my backup hard drives, then had to adjust so I could get it to fit all on one page again–and realized I hadn’t plotted anything in so long, I couldn’t remember what all the beats meant. So I had to hunt up the book, which I had loaned to the son who is doing some writing, and he had to hunt it up from the depths of his desk. I re-read the Beat Sheet chapter, then I re-read the rest of the book, kind of in reverse order. Then I looked at the sheet I’d printed out again, and realized that I really and truly did not have any plot at all whatsoever, because I had NOTHING to put on the sheet. I had my premise, and my characters, and beyond that? Nada.

I mean, I knew where I thought the thing should start, and I kinda had an idea of a couple of things that might happen, but where exactly on the beat sheet should they go? Were they the ‘break into two’ or maybe the B-Story, or what? No clue.

I stared at that sheet for a while longer, before it occurred to me that maybe the Tarot cards could help. They certainly couldn’t hurt. My main deck is in my red bag in the living room and I didn’t want to go get it, but I have a duplicate deck (I use the Shakespearean Tarot–those cards in the image above are some of them) on a shelf in my office, so I grabbed that one. And wham!

Opening image was the 8 of Sceptres/Wands. Things are changing quickly, good things coming. Okay. That will work. Then the theme–which I did not have a clue about– And up comes Strength. Which totally suits the story as well–strength of character is more important than strength of body… Then for the set-up, I got The Empress, Reversed. The Empress is all about being a woman. A woman of authority. (It has other meanings too, but…) And since my main character is a woman whose very womanliness has been taken away from her at the beginning of the story… You see where I’m going here?

Okay, as I got further into the Beat Sheet, some of the cards weirded me out. For instance, the Final Scene card came up as the 5 of Orbs/Cups, which is all about loss and grief. I’m writing a romance–we don’t do sad endings. But, on the other hand, I’m plotting a novella, which I plan to be one of a series which will make up a larger story. If I make the ending about loss, but make it optimistic–a “this is bad now, but it’s not the way it will stay”…maybe it will work.

And the happy thing for me is, if the market I’m writing it for doesn’t work, there’s plenty of other places it can go. And I can always draw another card, if I don’t like the one I got. Or just change the ending. But I kind of like it now … the ending I have in mind.

So, I am up to Day 3, since I’ve actually written a lot of words today. They may not be part of the actual manuscript, but I wrote them, and they progress the story, so I’m gonna count them!