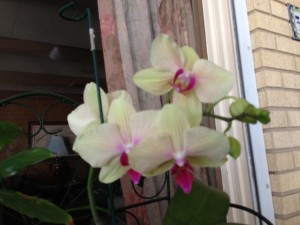 And spring is rolling right over me. Time just keeps passing and I cannot keep up with it.

So, yeah, I vanished right after that last post, because my dad didn’t recover from his skull fracture. He went back into the hospital a second time and we had to call in hospice after that stay. He passed on Feb. 20, a few months before he and Mama would have had their 60th anniversary. She came and stayed with me while he was in hospice care, and it was good to have her here. I’m a little sad, but happy at the same time, because I know he’s in a better place–somewhere he can remember who he was and do the things he could do before the Alzheimer’s hit and see his family again.

Let’s see–that kept me busy through the first of March. April and the grandbaby came for the funeral, as did both the boys and the Dallas grandboys and lots and lots of other relations. And when April and Rocket Girl went back to Georgia, the little toot left me with her flu/earache. Only it attacked my inner ear and vestibular nerve, so I spent a month or so being seasick on dry land. Did you know there’s physical therapy you can do for dizziness? Makes you sick as anything when they do it, but it sure cured my dizziness. The positional kind, anyway. I had to wait for the nerve to get well on its own. 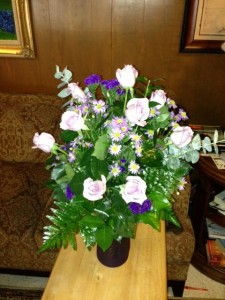 Which brings us up to my 37th anniversary. The fella sent flowers. Aren’t they pretty? The flash washed the purple of the roses out a little, but they matched the shirt I just happened to wear that day. Oh–and the flowers in the picture above? They’re from an orchid that Rob gave me for Mother’s Day one year. An orchid which has now bloomed for the second year! It has six blooms open now, so it looks even more impressive. Only–I turned the pot several times as the flower stem was growing, so the stem grew in a big, loose spiral…you can kind of see how it curves around. I didn’t know it would do that. It’s kind of cool looking, actually–and I would have had to pin the flower stem to a stick for support anyway, so…

We went out to dinner on our actual anniversary, which was on a Wednesday, at a restaurant we’ve been to before–Saltwater Grill– which is usually really good. This time, the shrimp and fish were not so fresh. It was kind of disappointing–but I guess when you order the special on a Wednesday… Oh well. Early in April, we had a really busy Saturday, with work and church stuff in the morning, then the Galveston Food & Wine Festival in the afternoon, and Art Walk in the evening. We went to eat at Bistro LeCroy, which has been one of our favorites in the past, but closed down for a move from The Strand to a new location on 21st St. around the corner from The Grand 1894 Opera House. It’s been open a little while, and it was really good. We ate crab cakes and shrimp and grits–very yummy. Their shrimp & grits sauce had bacon in it. I love trying different recipes of that stuff. They all do it different. (My recipe–which came from a junior college in South Carolina–has andouille sausage in the sauce.)

I’ve been cooking a lot. Trying new things–mostly gluten-free, of course. Reading a lot. (Check out my GoodReads page— I’m already to 207 books for 2013! Good grief.) I edited a book for a friend. I need to do some writing of my own, but haven’t. (I know, shame on me. But I’m dealing with a lot of crap–and mostly, it’s the being sick stuff that’s kept me from doing much.) I have been thinking about it. Thinking is good. I probably need to think about different stuff –like the book I need to revise, or the one I need to post on the self-pub stuff–but I am thinking about new stuff. Maybe that will kickstart me out of the “I Don’t Wanna” stage.

So. Well, I guess that’s all for now. I really will try to get back here next week. Unless something new blows up. Or whatever.