Okay, so I’m reading a book set in Texas, and as often happens, I’m trying to figure out where in Texas this book is supposedly set. I mean, it’s a made-up town, but usually, one can figure out what part of Texas these made-up towns are placed. So far, I’m not having any luck, because–first off, the story says flat out “east Texas” for the location of this “ranch country” town.

Which, if you’ve been reading my blog, you would know that East Texas and Ranch Country are mutually exclusive. Right? Right.

Then, a bakery where the heroine works gets an order to deliver bread for a party in San Marcos. And while the story says something to the effect of “Wow, that’s a long way,” San Marcos is nowhere near East Texas.

If you will take a gander at this handy map of The Big City Triangle here to the left, you will find San Marcos between Austin and San Antonio, just below the sign (non-functioning, I’m pretty sure) that says “Zoom to San Antonio map.” Remember the map of East Texas, and what I said about the boundaries of East Texas? It’s east of I-45. I don’t really know anybody who would get bread delivered from 172 miles away (San Marcos to Huntsville). And if this ranch country town is close enough for a bread delivery to San Marcos –well then, that IS ranch country. So okay. But it’s NOT East Texas.

But that really wasn’t what brought on my tangent. The story also had restaurants with wine and a bar and grill in the downtown of this little town. And Texas has really weird liquor laws. See, historically, the big religions in Texas (as through most of the South) are the Baptists, the Methodists and the Presbyterians. And all those folks tend to be fairly strict teetotalers. They don’t drink alcohol and they don’t want anybody else doing it. And the Texas State Legislature, being the traditional mess that it is, did their usual pass-the-buck job and left a lot of the laws about liquor up to the smaller governmental entities. Our experiences in the various rural counties where we have lived ought to be illuminating.

When I lived in Hill County (county seat Hillsboro, where I-35 splits to go to Dallas and Fort Worth), Hillsboro didn’t want any bars or restaurants selling “liquor by the drink.” Meaning that you couldn’t get a beer or margarita to go with your Mexican food. In fact, you couldn’t even buy beer or wine–in the grocery store or anywhere else–for the first 10 or so years we lived there (we lived in Whitney, on the western edge of the county, from 1978 through 1999).

Now Whitney is on the banks of Lake Whitney, which is one of the first lakes built in the early ’60s on the Brazos River for flood control. (Before it was built, Waco flooded pretty much every year.) And lots of folks from Waco and Dallas-Fort Worth came down to Lake Whitney and built
houses on the lake, and they wanted to be able to buy beer and maybe go out to a bar and have a drink. But Hill County was a dry county. So the folks in Whitney got a local option election on the ballot to sell alcohol–not by the drink, just beer and wine in a store. And it got voted down. The county-wide election got voted down. The commissioner’s precinct election got voted down. The justice of the peace precinct election got voted down. Finally, they got up a local option election in the constable’s precinct–and it passed. So somebody built a little wooden shack-like store halfway between Whitney and Hillsboro, and that’s where all the good folks in Hillsboro had to go to buy their beer. Those of us who lived in Whitney could go down to the one grocery store in town, or any of the mini-marts, and buy our beer there.

Several years later, Hillsboro passed its own alcohol sales election, and the little store in the middle of nowhere went out of business, because the grocery stores in Hillsboro could sell beer and nobody had to drive 10 miles out into the country. I’m not sure Whitney ever got a liquor-by-the-drink election passed. It might have by now. I haven’t lived there in 15 years, but when we left, most of the places where you could go get a drink were “private clubs.” A lot of the people in Whitney (and Hillsboro) drove down to West, (Yes, the West that had the fertilizer factory explosion.) because West is full of Czech Catholics, rather than Baptists, and –well, they had a bar. Wolf’s in West is where I saw/was in my first bar fight. (These two women got into it and crashed into our table, knocked one of my friends out of her chair and shoved us all around. Pretty mild for a bar fight, but still…)

Hillsboro eventually did pass a liquor-by-the-drink law before we moved away, and now you can buy a margarita with your lunch at El Conquistador. But I don’t think there’s an actual bar in town.

When we moved to Clarendon, in the Texas Panhandle, we moved to a town that was established by Methodists. The cowboys at the early ranches around there called it Saint’s Roost, and if you google Saint’s Roost, you’ll get sites in Clarendon. The story goes that the cowboys would go to Old Mobeetie for women, to Atascosa (now known as Amarillo) for liquor, and then down to Saint’s Roost on Sunday after tying one on all weekend, to get saved after. Clarendon is a great little town, but if you want to buy beer–or any other kind of liquor–you have to drive at least 7 miles out of town to the town of Howardwick (again, on the edge of a lake) to find a store. I had to make a special trip to get tequila to make marinated chicken. 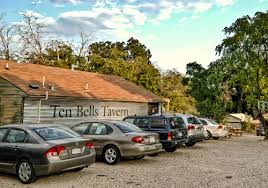 Most small towns in Texas are still dry to some extent or other. In fact, our daughter was attending college in Texas Tech (in 1998 and ’99) when Lubbock–one of those tier 2 (200,000 people) cities–finally passed a law allowing liquor to be sold in stores. When she first got there, the frat boys had to drive to Post, Texas–or at least outside the Lubbock city limits–to buy their beer. And in Amarillo (pop. 190,000+), you have to be in the Randall County part of town to buy a drink at your restaurant. (Most of Amarillo is in Potter County, but part of it is in the next county to the south, and all the nice restaurants are on the south side of town…)(Of course, it’s been 6 years since we lived anywhere near Amarillo, so the rule may have changed. Potter County might have voted in liquor by the drink.)

So, unless the town is majority Catholic–and most small Texas towns outside of South Texas aren’t–it’s not going to have a bar downtown. It’s just not. A lot of the time, there will be a bar nearby, but it’s going to be a few miles outside of town. Even if the restaurants around are able to sell drinks with dinner–and that’s pretty unusual, depending on the size of the town–the town will have written its local option so that the bar has to be X number of feet from a residence, from a school, from a church. Even Houston has rules like that. Even Galveston has rules like that, and Galveston’s never had many rules about much of anything… It’s famous for being rowdy. (They don’t seem to be real strict about it here. There’s a bar on the corner of 53rd St. and Ave. S that backs right up to somebody’s house…) But in those small towns, they tend to have rules that an actual bar–something that sells more liquor than food–has to be outside the city limits. Often they’ll be right smack on the city limits. But they’re not downtown. Except in West. Which has all those Czech Catholics.

Why is this important to a writer? Because you need to be aware of the screwy stuff like this. Just like you should know that in Pennsylvania, you have to go to a Beer Store to buy beer, and you have to buy it by the case, and you can’t buy any less than a case, but you can’t buy liquor there, you have to go to a different store–you should know that in Texas, because of local option, and because of all the Baptists and Methodists and Presbyterians (I’m a Baptist myself, but not so strict), liquor stores tend to be either outside town, in the resort areas, or on the fringes of town, if it’s a small town. If it’s one of the big cities, pretty much anything goes, except a bar near a church or school.

So stick your small-town bars and honky-tonks out in the boonies, okay? People have to DRIVE to get to them.

This is definitely not intended to be an academic study of Texas liquor laws. It’s just a down and dirty anectodal tale of how things are. And all that local option stuff? Means you can make it up how you want it. But it might be kind of fun to throw in something about how the bar just opened because they finally got the law passed…

One Response to Tangent: Texas Liquor Laws (Texas for Writers, #4.5)