I decided to go south and west before going due west. Probably mostly because I currently live in the Texas Gulf Coast Plain. Actually, I live off the Texas coast on one of those barrier sandbar islands like they have along Georgia and the Carolinas.

I think a lot of folks who live outside of Texas tend to forget that Texas is on the U.S.’s third coast. It has one. A long one, nearly as long as Florida’s Gulf Coast. (Texas just doesn’t have a coast on the other side, like Florida’s Atlantic coast.)

The countryside along the Texas coast, from the Sabine River on the Louisiana border to the Rio Grande on the border with Mexico, is pretty much the same. It’s flat, swampy and bordered with barrier islands or peninsulas. Just north of Galveston Island is Bolivar Peninsula. South of Galveston is Surfside, a beach community on another peninsula, I think. Bolivar is in Galveston County, and the most direct route to Beaumont and Louisiana. Surfside is in Brazoria County, so I don’t know as much about it, but it’s where we went to the beach when I was in high school in Houston back in the early ’70s.

Anyway, there are islands or peninsulas all the way south to Mexico. Padre Island extends all the way from Corpus Christi (about 2/3 of the way around the curve from Louisiana) to Brownsville (the city at the lower tip of the state). The coast is easily divided into thirds–Beaumont/Port Arthur/Orange is at the top, 1/3 of the way around is Galveston Bay, 2/3 is Corpus Christi Bay, and Brownsville is at the bottom.

Corpus Christi Bay is a deep bay. There’s a Navy base there, with ships and everything. The Houston Ship Channel runs through Galveston Bay. Ships line up in the Gulf waiting for a pilot to take them through Bolivar Pass between Galveston Island and Bolivar Peninsula and into the channel. The bay is very shallow.

I remember watching a documentary on San Francisco Bay that stated something about it being shallow, that it’s only 11 feet deep in places. And it made me laugh. People who have trouble with their speedboats in Galveston Bay don’t always have to wait for someone to come rescue them. Odds are good that they can just jump out of the boat and walk it in. Much of Galveston Bay is only 3 to 4 feet deep. This is why the Houston Ship Channel is so important, and the dredging of the channel is pretty much non-stop. It’s got to be deep enough to let these cargo ships through. And it’s why a pilot is required to get the ships–the ones that can make it–up the channel to dock. Because the channel and the bay are tricky. Some of the supertankers are too big to pass through the ship channel. They anchor a few miles off shore from Galveston and lighters come out to transfer the crude oil to the port facilities. Actually, all the ships anchor off shore, but most of them are waiting for a pilot. For their turn to go up the channel. Some of them just stay out there. I took the picture of the waiting ships this morning. There are always ships out there, just on the horizon. 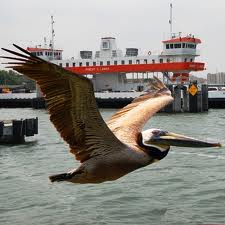 There’s a free ferry from Galveston to Bolivar run by the Texas Department of Transportation. TexDoT also runs a ferry at Port Aransas, just north of Corpus Christi, (There is no K in Aransas. It is not Arkansas misspelled. And it is pronounced Ah-RAN-zas) as well as the Galveston-Bolivar Ferry. There’s a bridge (toll) between Galveston and Surfside that crosses the San Luis Pass at the mouth of the Brazos River, and bridges between many of the other islands, and between the islands and the mainland. There has been talk of building a bridge across Bolivar Pass, but so far it hasn’t gone anywhere and probably won’t for a good while, because it’s a wide gap and because the bridge would have to be high enough for all those ships to pass. Cruise ships dock in Galveston, and they would have to get by any bridge as well.

The ferries are all named after various TEXDOT heads, and painted the colors of the university they went to. The one in the picture is orange, because obviously that namesake went to University of Texas. There’s one painted maroon (for Texas A&M) and one painted green and gold (for Baylor University). I think one of the Galveston-Bolivar ferries is painted bright red, but I’m not sure where that namesake went. I don’t remember if it’s red and white (for Oklahoma, maybe?) or red and black (for Texas Tech).

The ferry is a great activity for Galveston visitors because, 1) it’s free, and 2) it’s one of the best places to see local wildlife, from brown pelicans to laughing gulls to Atlantic bottlenose dolphins. Even better, you can park and walk on the ferry for a ride over and back, and not have to mess with traffic waiting to get their car on board. I’ve seen lots and lots of dolphins from the ferry–more than I saw on the “dolphin watch” cruise… Brown pelicans have made a tremendous comeback since I was a child. I never saw one back in the ’60s or ’70s. Ever. But I see them every day now. In large numbers. When a pelican catches a fish, sometimes seagulls will land on top of it and peck it on the head to try to make it drop the fish. I didn’t believe it the first time I heard that, until I saw a gull actually do it. They do make you feed the gulls from the back of the ferry though, so they don’t get in the way…

The coastal plain extends at least two counties in from the coast. All of that territory is extremely flat, not very much above sea level. Houston’s elevation is 43 feet. Galveston’s is around 11, overall. Corpus Christi’s elevation is 7 feet. You can see why a hurricane could be a problem. This is one of the areas in the U.S. where rice can be grown. (Rice University in Houston is not named for the grain. It’s named after William Marsh Rice who founded and financed it.) The climate is warm and moist, and there’s usually plenty of water for flooding the rice paddies. Unless there’s a drought. Because the climate is usually pretty wet and the plants are adapted to all that moisture, a drought can cause problems faster along the coast.

The big cities are at those 1/3 markings. In between, the cities tend to be pretty small. Lake Jackson, Wharton, Victoria, and Kingsville are the larger of the small cities on the coastal plain. Lake Jackson has a bunch of other towns crowded together with it–Freeport and Clute among them. It prospers because there’s a huge Dow Chemical plant there. (The largest in the US, I think. My son’s a safety engineer there.) Wharton, Victoria, and Kingsville are towns that grew from their agricultural roots. The areas around them are pretty rural. Wharton’s less than 10,000 population. Victoria’s just over 60,000 (which makes it bigger than Galveston. Galveston was around 58,000 before Hurricane Ike, and is around 48,000 now, 5 years after Ike.) Kingsville is about 25,000, and Lake Jackson is about the same size. (This doesn’t count Freeport or Clute, but Lake Jackson is where the upper middle class folks tend to live.)

There are lots of waterways and bridges along the coast. My youngest son lives in Brazoria County, about an hour’s drive south of Galveston, depending on whether you take the Blue Water Highway down the island and over the San Luis Pass bridge to Surfside and across the bridge to the mainland at Freeport, or you go down the Farm to Market Roads on the mainland. Taking the mainland drive, we cross at least five bridges. Some have a high arch to allow boats to pass underneath. These are not rivers. Most are bayous or some other bay inlet. Oh, and in Texas, bayou is not pronounced “bye-yoo” as in Linda Ronstadt’s “Blue Bayou.” In Texas, it’s properly pronounced “bye-yo” (rhymes with yo-yo). Houston is on the Buffalo Bye-yo.

Along the coast, the live oaks tend to drip Spanish moss. The farther south you go, the more palmettos you’ll find growing. And those sawtooth palmettos you find in Florida and at the nurseries? Native Texas palmettos don’t have those sawtoothed edges. They’re smooth along the edge. So they won’t hurt you when you walk among them. Smack you in the face, yes, but not hurt you. Mexican fan palms are basically native and grow all along the coast, and you can plant and grow most other varieties of palms. A neighbor has some variety of date palm (probably non-edible, except by birds) that fall all over the street in late summer. The entire Texas Gulf Coast is in growing zone 9, with the very coastal edges in zone 9b (if that means anything to you), and the lower Rio Grande Valley in zone 10, where they grow oranges and Texas Ruby Red grapefruit. Basically, what this means is that semi-tropical plants will grow there. Bougainvillea, poinsettia, oleander, hibiscus, that sort of thing. 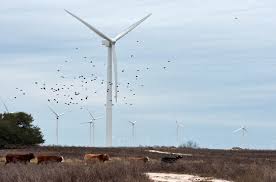 There are quite a few ranches along the Gulf Coast–in fact the King Ranch, one of the largest in the state, is on the coast between Corpus Christi and Brownsville. Before developers bought up all the ranch land on the island, there were ranches on Galveston Island. The cows thrived on the salt grass growing there. There are still cows and horses on the island, but they’re in smaller pastures, stuck in between beach houses on stilts. And they suffer in the hurricanes, though the owners do their best to get them off the islands, at least, for the hurricanes. It would be an interesting twist, I think, to set a Texas story on a ranch along the coast, and have palm trees, Spanish moss and all the rest of it… 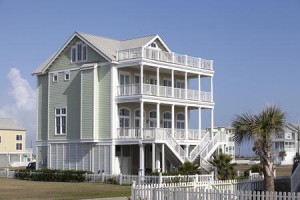 Oh. Pretty much all the beach houses are on stilts. Even the ginormous mansions. It’s pretty amazing to see these huge houses sitting up in the air with garages and nothing underneath them. I’ve seen houses that looked like something out of Arabian Knights perched up above a big garage. Even the hotels are–basically–on stilts. Sometimes, they’ll build up the earth under the foundation, or build big cement pilings and put the parking garage under there, but they’re all elevated. So if your story has your characters going to South Padre Island or some beach house–they need to climb stairs or ride an elevator or something to get to the main floor. Remember those hurricanes? Because on the Gulf Coast–from Florida through Alabama, Mississippi, Louisiana to Texas–it’s not a matter of if the hurricane will come. It’s a matter of when.

What else is there to say? What do you want to know?

I’m not writing a definitive description of the State of Texas. I’m just hoping to bring up things about the state that writers ought to know, and point them in the direction of a little research that ought to be done.