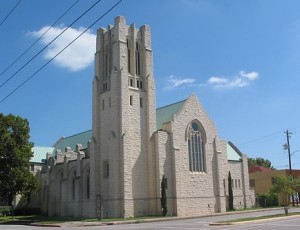 I’m going to try to get a quick post up before I head to my writer’s retreat this weekend. And I thought I’d toss in some general shots of the city on my island.

For instance, this is the church across 25th street from the post office. It’s hosting the island’s Oktoberfest this weekend (which I won’t get to attend).

Got some writing done yesterday. I’m feeling pretty good about it–throwing two separate things at my heroine to be dealt with almost simultaneously–but I realized I forgot to explain the opening statement in her scene, so I have to find a place to squeeze that in, in an already overloaded scene. Today, I’m just packing, cutting up cantaloupe & watermelon to take along, moving plants inside, that sort of thing.

I’m going to leave a few plants outside, that don’t seem to be suffering from the cooler weather. Some of them didn’t seem to have a problem with the cold, maybe most of them, but the wind’s been a problem. I have a lovely rex begonia that had its leaves so blown around that the stems broke (or bent too much and got pinched off), and the angel-wing begonia lost a few leaves that way too. So I just brought everything in, except for the ones that didn’t seem to suffer any 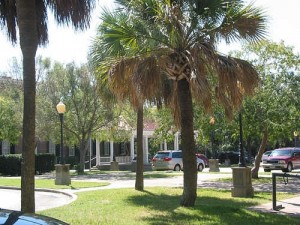 This picture is the bandstand across the street from the library. I think I took the picture from the library parking lot, or maybe the sidewalk. Anyway, this is where the Tuesday night band concerts take place during the summer. Where the cars are parked, they put up park benches for everybody to sit and enjoy the concerts–lots and lots of fun.

There’s always a ton of stuff to do around here. We’re missing a lot of things by being out of town this weekend, and of course, there are so many things going on, one person just can’t get to it all.

Last night, the Chamber of Commerce hosted an awards banquet and presented awards to all three of the “institutions of higher learning” on the island–there’s the fella’s community college, a medical school and a branch campus of one of the major state universities. So we had to be there, because the fella had to accept the award. It was a nice dinner, with a very nice presentation. I thought it was a pretty good deal, to be in town just 3-1/2 months and get an award.

Met a lot of nice people, and one of these days, I’m going to get to talk to some of them for longer than 3 minutes at a time. I’m hoping I can remember some names, next time I see them. 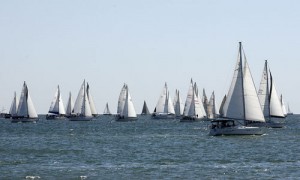 One more picture. I didn’t take this one myself, because I completely forgot it was happening. I snitched it from the newspaper. Yesterday was the start of the Harvest Moon Regatta, a 150-mile sailboat race down the Texas coast, with over 200 ships taking part. The one on the front page of the paper showed the Elissa with all its square-rigged sails & multiple masts, but I couldn’t find it on the paper’s website. Oh well. I hate that I missed seeing the boats start off, but one just can’t make everything.

Y’all have a good weekend!