In other news, everybody has gone home–even the boy and the granddog. My brain is beginning to function again, and I’m trying to get back in the swing of writing and running errands.

We did So Much during the holidays. We went to the submarine and the destroyer at Seawolf park over on Pelican Island. We rode the ferry over to Bolivar and back–it was a pretty good deal–free, and it had an outside walkway upstairs that the grandboy could run track on and mostly not escape. He did look at the boats and the water now and again–lots and LOTS of boats heading into and out of the ship channel. The Bolivar ferry crosses the main strait there. We even saw a few dolphins–not that the little boy looked, but the big kids got pretty excited to see them. 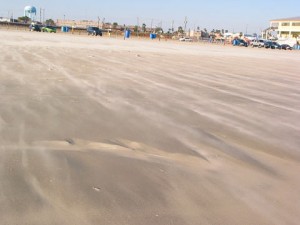 We went out to the beach on one of the warmer days–which was still darn cold, especially since the wind was blowing like crazy out of the north. You can see how the sand was blowing–like snowdrifts, toward the water. 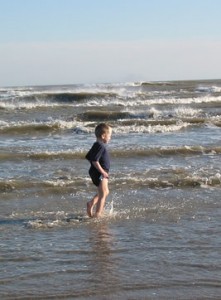 He had to be carried, kicking and screaming, out of the water. So, anyway, we had a great time. (We even took him back to the beach on another, warmer day–water was still cold, maybe colder–and he had to be carried out of the water then too.) But it was really busy, and in the middle of it all, the dishwasher gave up the ghost. It just flat DIED. And with six people still here, that meant a lot of cooking, and a lot of dishes to wash.

I think the death of the dishwasher was kind of the last straw for the fella. They are fixing it, but it’s the timer that’s out (the thing won’t even drain), and it’s taking a while for the part to come in–and the first time it came in, it didn’t work. Anyway, a new rental opened up in one of the nicest parts of town for very little more money, and no stairs to climb to get in the house. So we’re moving again at the end of the month. And moving all our furniture down here probably during spring break. Going to be lots of distractions in the weeks ahead, so I have to write, write, write. Or try to.

This week, I’ve started typing in Thunder in a Cloudless Sky, the WWII/China story, to get my head back into the story. Next week, I’ll start writing on it again. I’m going to have to decide what story I want to complete this year and which partials I want to try to revise. I do want to finish a partial for the futuristic, Time Catch… I’ll just have to see what happens, I guess. 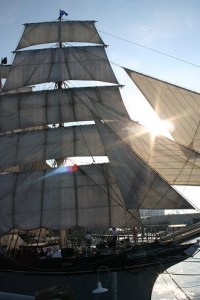 Beach report: I went out to walk on the beach, but turned out it was high tide, and the tide was so high, there was no room to walk. It was almost all the way up to the seawall. So I walked along the sidewalk a ways, and when I got back to the house, my hair had been waved into ripples by the humidity. Yesterday, I had to drive back and forth down the seawall a couple of times, and there was a fog rolling in off the gulf. You could hardly see past the surf, and cars and stoplights were pretty dim, and yet the fog was really bright, because the sun was shining. And only a few blocks away, mid-island, maybe, there was no fog or mist at all. It was really kind of cool.

I’ll leave you with a picture of the “pirate ship’s” sails.

3 Responses to Catching up