A Coastal Texan in San Francisco 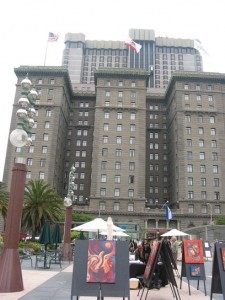 What that title has to do with anything, I don’t know, except maybe that–being a coastal Texan, I do not do San Francisco’s hills very well. So. (The picture is of Union Square and an art show–that is some other hotel in the background…but it IS San Francisco.)

Wednesday. I got up at O-dark-hundred and got off to the airport about 15 minutes later than I wanted to. Because of the gathering traffic, (due to my lateness, it was starting to get heavy) I was worried about getting my bag checked and through security on time, but I made it. Whew! Finished one book on the first leg of the plane. (Can’t remember what it was, right off hand.) Got to LA, had time to grab some food–since it had been about 4 hours since breakfast by this time, but only 10 am. California time. When I got to the gate for the next leg of the flight, one of my two roommates was there and we got started on “Conference Voice.” See–as writers, we don’t spend a lot of time talking in our regular lives. And when we get to conference, we start talking before we get there, and don’t stop till we get home again. And everybody gets hoarse or loses their voice entirely. (I don’t lose mine–it drops in pitch, till you would swear I sing bass.)

Got to the hotel, met up with our third roommate, and went across the street to Annabelle’s bar and grill for lunch with Australian writer Denise Rossetti. (She’s got a book coming out in the spring from…Berkley, I think, but could be someone else…with a gorgeous cover.) I tried really hard to eat California cuisine the whole time I was there, so I had a Hawaiian pizza for lunch. Then it was pretty much time to get back to the room and get organized for the literacy signing at 5:30. 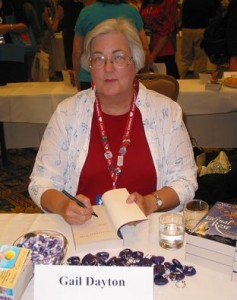 Juno Books and editor Paula Duran really came through for me and had a dozen books there for me to sign. The Tor people brought by light-up keychains and purple Tor M&M’s to give out–and if they took any Ms, they took one, or maybe two. Like they were rationed. I am still eating Tor M&Ms. I took them to the newsroom, and even Rhiannon, the M&Ms addict, has stopped eating them. Not me. However, they have lasted me all week…

I tried to run around and see all my friends, and all the people who had books I wanted, but invariably, I missed somebody. I stumbled across Liz Carlyle and her new book, and picked up a book from…Hmmm–it was one that I wanted, and now I can’t remember which one it was. (I have washed my brain and can’t do a thing with it.) I can’t remember who took this picture, either. One of the North Texas RWA folks who came by to see me, I think. I would name the people who came by to say hello, but I’m afraid I’d forget somebody, or–worse–forget half their name, even though I’ve known them for years. Y’all this is pitiful. I can’t remember squat any more!! I did go by and gush at the people whose books I’ve read and loved, like Nalini Singh and Jane Graves and Carlyle and Terri Garey (who won the RITA) and a bunch of other people.

After the book signing, where I bought the copies of Eternal Rose that were left and two other books (shock! only two!), I went with a group of online friends to dinner at a little Italian restaurant called Pazzia. I had seafood risotto with mussels and calamari and things I didn’t know I liked. (I don’t like oysters–taste, not texture. I liked the mussels.) It was very good. And the evening and the morning were the 1st day. 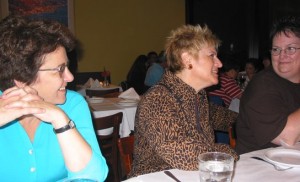 Thursday. Thursday morning was the opening ceremony and the general meeting. I had a couple of granola bars and a cup of tea (I brought my own teabags–I’m not old enough to drink coffee) in the room, wandered downstairs and had another cup of tea there. I basically wandered around most of the morning. Went to the book fair and bought a really cool research book on Victorian London, as well as a couple of new releases by various people. Went into the opening ceremony for a little while. Went by the bar and saw some people I know.

(This picture is from Wednesday nite dinner. From left, are Marie, Carolyn and Cai (my newspaper habits are showing).) (I’m not sure I ever caught Carolyn’s last name…)

Then at 1:00 it was time for my lunch with my editor, Heather Osborne at Tor. We walked rather aimlessly…down 4th street, I think, until we spotted a couple of interesting restaurants. We decided on the Irish pub, or the Chinese place across the street, if the pub didn’t have food. But they did. I had fish and chips (you do not get Irish-style fish and chips here). We had a great time talking. Her excitement about New Blood made me all excited, and I told her about Old Spirits, which she said sounded cool. (She liked the heroine’s conflict.) I really need to get that off to her… And eventually, we walked back to the hotel and parted ways. I went to a workshop. I like workshops. I will have to look at my notebook (I bought a smallish one Just For Conference) to remember which one it was, but it was pretty good. More of the motivational type. I found it pretty motivating.

Then I headed down to the bar to catch up with the Brainstorming Desirables. Some of us don’t write for Desire any longer, but I like all the people (have roomed with them in the past) and really wanted to catch up with them. Got to hang out with Marilyn Pratt from Writer’s Playground, and caught up with Bronwyn Jameson and what her boys are doing these days. Nalini Singh came, and Mary Lou Wilson, and Tessa Manley, and I know I’m forgetting several someones, but I definitely remember talking to these folks. It was great. We hung out for an hour or so, and they had another place to be, and it was time for an online chapter gathering, anyway, so I went upstairs to it.

Those of you who know me, or have followed the blog for a while, know that I can be dangerous around food, mostly to myself. However, at this party, I became dangerous to others. First, I somehow turned and slung all the chips and empanada off my plate. Thirty second rule–I picked them all up–then I got something else off the buffet, and when I set the tongs down, they flipped off the tray and landed in the meringue tarts on the shelf below… Then I went to sit down, whacked my knee into the table and knocked over half the sodas on the table, some of them into people’s plates. I had to promise not to move again, until everyone was done and departing. They would bring me food. I would not get up.

This was a nice party. Scott Eagan of Greyhaus Lit Agency spoke. He’s looking for a big contemporary romance, not suspense or paranormal. He only handles romance and women’s fiction, and is very open to new authors. 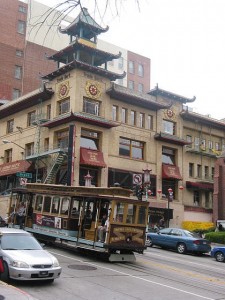 By this time, it was time for the PASIC party to start. I walked over with Bron Jameson and a bunch of Aussie/NZ folks–Frances Housden, who I stood in line with at Reno and has been a great friend since, and Fiona somebody–I’m not sure anybody ever told me her last name, but she writes medical romance for Harlequin and is a lovely person, and Lillian Darcy who I got to sit next to at one Literacy Signing because all the Dawsons and Davises and Days were gone that year. There was one other American in the group, tho, so I wasn’t totally outnumbered. I hung out with Frances a while, and went and sat down with Bron and Fiona a while. They were talking to Virginia Kantra of the Sea Witch selkie books–she’s written a lot of others, but these books are hot right now–and we had a great talk too. I really enjoyed getting to visit with Virginia. I spoke a little bit to Allison Brennan, and that was about it. The party was at the restaurant in Nieman Marcus and was just a gorgeous location. Fabulous party/place/people.

And the evening and the morning were the second day.

The other days will have to wait for another blog. But I will post another of my San Francisco pictures…. This last one is from my one day of sightseeing…

2 Responses to A Coastal Texan in San Francisco