I’ve always loved both art and music. I took oil painting classes when I was in junior high and early high school, and piano lessons for years, as well as participating in band in high school and college. In fact, the fella and I met in the Baylor University Golden Wave Marching Band, following family traditions. (I played flute (not very well) and he played trumpet and B-flat baritone.) (One does not play instruments very well if one never practices.) I got back into the painting while I was in the Panhandle–haven’t managed to pull it out again since I’ve been on the island, though. Sigh. Anyway… 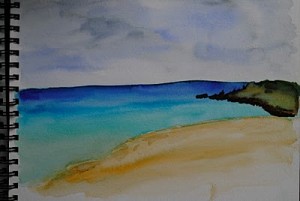 So we encouraged our children to be involved in art and music–or at least music. The daughter has taken up watercolor. That’s one of her paintings from her trip to Sardinia. Yes, the Sardinia that is the island off the coast of Italy where Italians (and apparently many Germans) go to vacation. (Statisticians must have really good conferences. She got to go to Dublin too. I am totally jellus–except for the statistics conference part. Don’t particularly want to go to one of those, just to Dublin, or Sardinia.)

All three of our children were in band (trombone, trumpet and baritone). They have variously taken up guitar and singing. The oldest & youngest have played with learning keyboard. They are able to sing because they have not been handicapped with the allergies their father has had. They can hear and match pitches.

And now, the next generation is coming along. The middle grandchild loves to play with his parents’ trombones. (We moved seven of them the last time they moved.) He loves music, especially the songs in Disney’s Fantasia, both volumes. He is so enamored of Gershwin’s Rhapsody in Blue that one of his favorite birthday gifts was a book about the Gershwin brothers and how that music came to be written. And he’s Seven years old.

He also wants to know why there isn’t a Rhapsody in Purple. (This may be why he colored himself purple with markers the other day…) 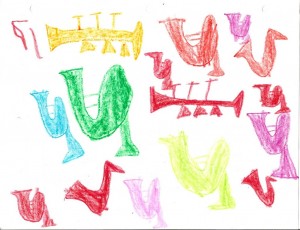 He wants to jam. Not in those exact words, but he does. This is his picture of the instruments in a jazz band. Okay, so the trombones look a little like pregnant, one-legged camels, and the trumpets look like they could play from both ends, but I think they’re recognizable. I guess there are so many trombones because his parents have so many. (They met in the Texas Tech Marching Band, in the trombone section, just FYI.)

I just like the look of the picture. I think it could make a cool all-over fabric print, or something. Not bad for a 7-year-old, is it?

In other news, I had the Flu that Would Not Die last week, and am only now finally getting myself vaguely back into the swing of trying to get my book finished. I am so glad I don’t have a deadline.