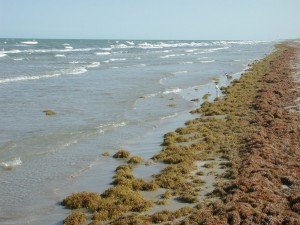 So, while we really haven’t had any oil on the beach so far–none at all, from what I can tell–it is seaweed season. Every year, huge blankets of sargasso seaweed drift into shore. The picture is of Padre Island National Seashore, but our little sandbar island looks much the same during seaweed season. Except a lot of mornings, the blanket of seaweed is thicker, and wider.

It’s perfectly natural. The seaweed is actually GOOD for the beach and part of the Gulf coast ecology, and it’s interesting to walk on (though you don’t want to much, because you can’t see what’s under it). It can be kind of stinky. Here, they tend to rake it up and pile it against the seawall to help anchor new sand dunes. Other places, I’m not sure they do that much.

Thing is, it’s kind of a red-brown color, once it washes ashore and dries out. Very similar in color to the red-brown oil they’re showing in the pictures on TV. Consequently, a number of folks in hotels along the beach would see the sargasso clumping up on the beach, and call downstairs in a panic to ask “What’s that stuff on the beach?!?!!” It’s seaweed. It belongs there. Just step over it, if you don’t like the crunchy, textury way it feels. It’ll be gone soon, and then it will be jellyfish season, and you’ll be missing the seaweed. (Yeah, the jellyfish come ashore after the seaweed mostly stops. It doesn’t really ever completely stop.) Still, when there’s a choice of oil on the beach, and seaweed–give me the seaweed!

I did get some pages written today. Not many. I’m going to join a 100-words-a-day group and try to get this dang book finishes.

This entry was posted in the beach, writing. Bookmark the permalink.