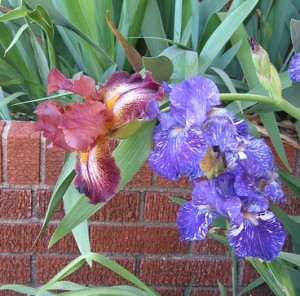 That’s how Doodle Bug says “Pretty Flowers”–or at least he did at first. He’s the 4-year-old autistic grandboy, and he works very hard to make his words come out properly. He talks a little slowly, but he’s very careful with his words. Anyway, this blog entry is called “Prebby Flowers” because I have some in my front flowerbed.

These are the iris right outside the front door. I’ve never had any of the maroon-with-white iris before, but I did have some of the Batik iris (the purple streaked with white) in our previous house. Last year, very few of the iris bloomed, but we’ve had a wet winter (and a very long one, but the snow didn’t seem to hurt anything), and everything is blooming like crazy. 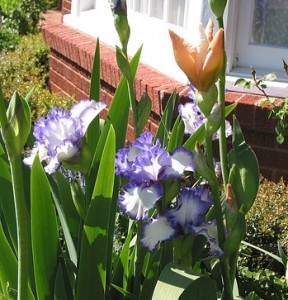 Now these iris are under the bay window, as you can see. The apricot one isn’t quite open yet–I’ll try to get out and take a picture of it tomorrow… (Hmm. That reminds me. Better take the battery out of the camera and charge it up. It was telling me I needed to do that.) But I thought the blue picotee iris were pretty. And if you look on the right side, you can see the rose buds getting ready to bloom. A few are open already, but they’re not where I could get a picture with the iris. You can see a little bit of the blue sage behind them… I’ll have to find the picture where I got more of the sage… Can you tell I like blue flowers? (The roses are red.)

Um. So. This week, I worked on revisions for New Blood. (The Victorian blood magic book, remember?) I think I have the chapters all revised. Need to input the revisions on the synopsis yet. Then I want to let it sit a while longer and go over it one more time. Then I need to type in the rest of the story, and make notes about the changes and revisions I want to make there. Some I can do while I’m typing in, but I think there are some structural changes that need to be made. And that’s not so easy to do while typing. 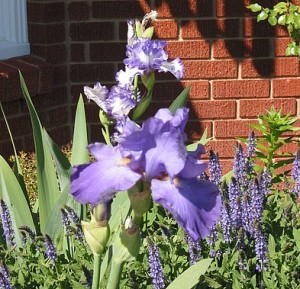 I was rather amused today when my horrorscope said that I needed to put away my artistic project for a little while and go back to it later. Exactly what I intend to do.

Once it’s typed in.

I had to take time today to judge some contest entries that were due on Saturday. I enjoyed judging them, but I missed the e-mail that said when they were due back, and there wasn’t anything in the packet. I learn a lot myself when I judge contests. It makes me realize what’s missing in my own writing–and I need to go back and ramp up the emotion one more time when I go through the chapters again.

Mostly I wanted to share my prebby flowers with you in this e-mail, but I can whine too, right? I burned my hand Saturday. Burned it bad. Bad second degree burn. (Disgustingness alert! Don’t read more if you are easily grossed-out.)

It blistered up Saturday night, and popped. Then it blistered up again on Sunday. Bit fat quarter-inch swelling ugly blister. Monday a.m. it got a little hole in it, and all the water leaked out, and kept leaking until today, when it basically ripped open. So I put antibiotic on it and put a bandage on it (which wouldn’t stay on my palm), and have been babying it. But it’s still pretty icky. I’m just glad it was on the thumb side of my lower palm. I could still type. So there. That’s my whine. I’ll share more flower pictures with you soon. I didn’t even show you the all-maroon ones. Or the white ones. Or the two-toned maroon-and-yellow ones… Yeah. I got prebby flowers.