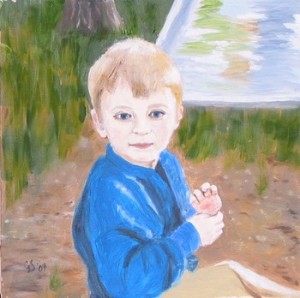 In a weird aside to the art class thing, I got a certificate for completing an “Intermediate Fencing” class. I didn’t think I signed up for fencing. I never went to a fencing class. I might have signed up for piano–my art teacher also teaches piano, and sometimes I sign up so she has enough people in her class to “make.” I always kinda wanted to go to fencing class–just to watch and see how it’s done, not because I thought I could do it.

Anyway, at my last painting class, I finished up a couple of pictures. I think they turned out pretty well, but we’ll see what you think. I’m only going to post one of them though. I’ll put the other one up later. Those of you who know the boy–does it look like him? If you can tell who it’s supposed to be, I’m going to assume it does.

(A lot of the shading in the painting doesn’t show up in this photo, alas.) 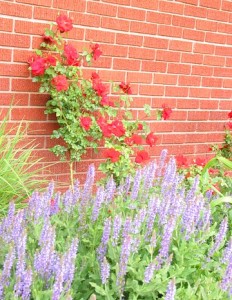 The roses and the sage are blooming like crazy. They should continue to bloom all summer long, which is nice.
I may finally have enough flowers to hide the weeds in most of the front–but the burr clover in the back…I need to get busy before all those burrs stick to my socks…

Let’s see–I didn’t mention my Mother’s Day. All the kids called to say hello, and the grandboys did too. It’s a little alarming when you ask “How are you doing, sugar?” and the little voice says “I’m much better now.” Turns out the oldest had strep throat all last week. But he’s much better now. So, I talked on the phone, and I took a nap for Mother’s Day. I was very tired, because we drove down to Lubbock the evening before to watch the college baseball team in the regional playoffs, and we didn’t get home again until after 1 a.m.

That late, it’s safer to drive up through the canyon–you have to go around the Paloduro Canyon to get from here to there and back again–and around sundown, there’s a lot of wildlife on the road. It’s pretty country driving through the bottom end of the canyon–I have never seen it so green. Wildflowers and green, green grass everywhere. We’ve had a very wet winter and spring this year–for which we are grateful, after last year’s drought and fires. The average rainfall in the Texas Panhandle through this time of year is just over 5 inches. We’ve had 15 inches of rain so far this year (not counting the nice rain we got yesterday morning), so no wonder everything is so green. We’re 10 inches ahead. Anyway, we did see a deer driving back home again, but only one. I’ve been down that way in the mornings and seen turkeys, deer, coyotes, road runners and maybe wild pigs (Those pigs are sneaky) out on the road.

Oh. And the Bulldogs lost, but they were playing against one of the top-ranked pitchers in the NJCAA–a guy who usually “run rules” the other team. (“Run rule” is when they call the game after the 7th inning if one team is ahead by 10 points or more.) And the score was only 6-1. They were actually proud of holding them that close. I think they won their second game. But lost the 3rd. So the guys got to go home. And given that some of those students live in Adelaide, Sydney and Melbourne, Australia… You know, it was just a bit odd to hear “chatter” in those Aussie accents…

This entry was posted in family, flowers and gardening, painting, trips. Bookmark the permalink.