And Summer Goes Slipping By…

I have been scolded for not getting a post up. It’s not my fault–or not so much. I’ve been away. And I’m about to go away again. But I’m here now and so I shall attempt to get up a quick post.

You may recall from earlier posts (like the one just previous) that I had the grandboys for a week plus. We had lots of fun, going to summer reading at the library and such. Spent more time that I liked hunting for a) video tapes borrowed from the library and/or b) the boxes said videos came in. I had to get out a left-behind golf club and fish one of the boxes out from under the TV stand. One of the boxes I still can’t find–but the nice ladies at the library said to bring it on back anyway. (the video, not the box, since I don’t know where the box is, so I can’t bring it back. But the orange video is sitting on the end table in the den.)

Then their granddaddy left town to go start his new job. (For some reason he thought that was important.) That wasn’t so bad, but then the son–the little boys’ daddy–didn’t make it to town till about a day later than we’d hoped. (Me and the little guys.) We did fine, but we sure were glad to see their daddy. 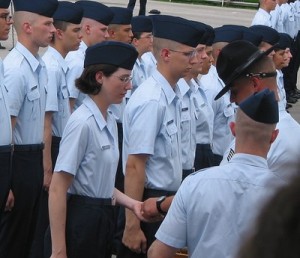 Then I took them all home, and drove down to Austin to see the parents and the sister & B-i-L who were down from the far northland to see my niece graduate from Air Force bootcamp. That was an adventure and a half, but we don’t want to make this blogpost too long. The picture here is of the niece getting her Coin the day before the official graduation. She was an honor grad, but I blurred most of those pictures. (sigh) Anyway, it was a lot of fun to get to go and see all the ceremony, where she lived, all that stuff, and to visit with the family.

I took Mama & Daddy home before the rest of them came back up, because they couldn’t keep up too well with all the “young folks.” We had a nice time shopping and “resting up.” Then it was time to go to Dallas for RWA.

That was an experience and a half. And I took Absolutely NO pictures while I was at conference. I don’t know why, except that I just didn’t feel like dragging the camera around. So I didn’t. I didn’t even get a picture of me with my Prism award.

Yeah, I won the Prism Award in the fantasy category, which is a pretty nifty and well-respected award for fantasy and paranormal (like vampires and stuff) romance, presented by the Fantasy, Futuristic and Paranormal chapter of RWA, for The Barbed Rose.

The Prism is given each year for the best published novel in several fantasy/SF/etc. categories (of the books that are entered, anyway). The other two finalists in the fantasy category were also LUNA authors, and I honestly never expected to win, which meant that when I did, and they asked me to say a few words, I had to fumble to come up with something. I sincerely hope I didn’t make an idiot of myself. I was absolutely thrilled–I’ve wanted one of these babies since I got to rub the one Robin Owens won…in Reno, I think it was. The award is a beautiful crystal…prism. It’s a pyramid engraved with the award name, the category, and the book title and author (me!), and it turns all sorts of lovely glowy colors depending on what angle you look at it. It’s sitting right on top of my desk (in one of the cleared off spots.)

I’ll write more about conference when I recover a little more. I danced a lot at the Harlequin party, and I’m still sore from that. A few of us tried to teach all the Yankees about the Cotton-eyed Joe, but I’m not sure how well it worked. Oh well. And then there was all the REST of the dancing.

I intend to post at least one more blog before I head down to the island for the weekend to look at houses. We shall see if I make it. I’m trying to write 25 pages on the World War II novel (working title: Thunder in a Cloudless Sky–because that’s what artillery firing sounds like…) by Saturday this week, so I can earn this month’s charm. It’s 25 pages for the month, and I haven’t written anything at all so far this month. (First boys, then out of town.) It’s looking pretty good. I’m up to 16.5 so far. Of course, I haven’t done a THING toward moving… except unpack the suitcases and divvy up the give-away books from conference.

This entry was posted in family, fantasy, The Barbed Rose, Thunder in a Cloudless Sky, trips, writing. Bookmark the permalink.

4 Responses to And Summer Goes Slipping By…