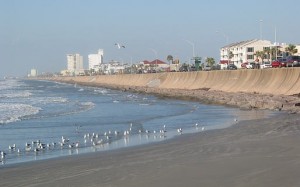 Thought I’d open with a view of “the seawall as it was”–how I remember it from when I was little, all rocks and no beach (the bit in the foreground’s been brought in). This is to the west from where I usually go down to walk. I walk to the east, cause there’s no beach this way…

So anyway, I pulled out this old story I’m wanting to re-write, and revised the opening pages, and I’m still not sure they flow. Or rather, I feel like they open too slowly. I do want to open with this particular scene, but it’s a slow scene, a slow build, and I’m struck with insecurity that I’m doing it right, or that it’s a story worth telling, or… anyway.

I stopped and have been doing characterizaton work. Because my heroine is a completely different person (except for her name, appearance and backstory), with a new personality, and I had to stop and think about a few things about her. What her personality is. Whether she likes change or hates it. Is she adventurous? (She is.) So I did a lot of that today and yesterday. And now I’m working on the hero’s character stuff. I know him a lot better than I do her. And I’m still not sure that the opening works. I hope it does, but… Maybe I will e-mail my pages in for the Chocolate critiques my new RWA chapter is doing next month. And my pages for the critiques at the retreat I’m going to next weekend…

Tonight is the first Big Fancy Shindig in our new town. Because of the fella’s job heading up the local junior college, we get invited to all sorts of dinners, fundraisers and other community stuff. But I have to tell you that the events here are of a whole other magnitude than where we moved from. You do not need a tux to go to the Saint’s Roost Chuckwagon Cook-Off or the cancer society barbecue out at the Bar H. The Prevent Blindness Gala in our new town does. There are lots of people with lots of money on the island, plus the population–the Panhandle town had right at 2000 people. The island town has 60,000. What is that, you math people? a 300% increase? More, probably, right? Anyway, this calls for some serious primping.

The fella went out and bought a tux. He decided the beaded stuff I already had wasn’t fancy enough, so we went out and bought me 4 more dresses. (Two are formals, two are cocktail length.) Plus shoes and underwear (yeah, the dresses need special underwear) (which cost more than the shoes, which totally freaked the fella out, because underwear aren’t supposed to cost more than shoes)–and I still didn’t spend as much as he did for the tuxedo. So I get to buy another dress later. 😀 I’ll try to remember to make him take a picture tonight so I can share. It is a gorgeous dress, and fancy shoes, and all. We’ll be classy. I want a nap, but if I go lie down, I’ll mess up my hair, so I’m posting my blog instead.

Beach report: Mostly swept clean, but still lots of big rocks near the fishing pier. Not big as in boulders–those are always there, but big as in lots bigger than the shell scruff that was there last week. Saw a little bit of the sargasso-type stuff, but mostly the big seaweed. Some of the big stuff was new–still green. Just seagulls, except for one little pipit (or whatever the little bitty sandpiper-like birds are–I really need to get my bird book moved down here). No cormorants or egrets. 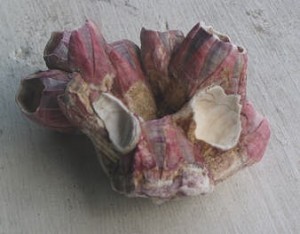 See those pink shells? That’s what I picked up off the beach after Humberto. Cool, huh? Pink! I think they’re some kind of barnacle… (There are two of them–the two in the back left? Those are separate from the big chunk. I put them in the back to sorta prop the other ones up…)

The tide was really high when I got out there today, though it was on its way out. It had been higher, almost all the way up to the seawall, undercutting some of the dunes. Haven’t downloaded that picture yet.

This entry was posted in fantasy, pastimes, the beach, writing. Bookmark the permalink.

One Response to Insecurity Strikes