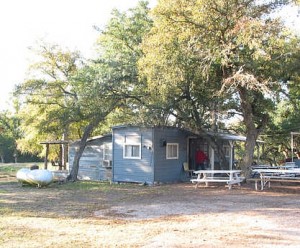 Busy, busy weekend. And I’m expecting L.K. Hamilton’s Lick of Frost on my front porch any time now, and when it comes, I’m pretty much going to drop everything and read (hmm, isn’t there a school program called that? DEAR?), so I thought I’d get a blog in while I could.

So, I went to a chapter writing retreat in Valley Mills this past week. As you can see, the little house where we all crowded in isn’t much, but it gave us privacy, a place to all squeeze round the same table, and a place to sleep, so we camped out for the weekend and talked writing. I got positively inspired. I’m still working on the Irish/Navajo story, but I brainstormed a plot for a two-page excerpt I wrote who knows how long ago that I always liked and thought could make a good story… and now, I really want to get to work on that one too. (The other picture is the view from the porch at our retreat place.) 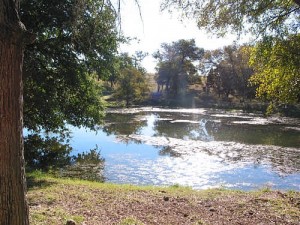 Then, I headed to DFW to see the daughter while she was down in our neck of the country at her 10-year-high school reunion. (Good grief–do I have a kid that old?)(Guess so.) Her brothers came from Waco and Dallas and we had a great family visit. I can’t get any more pictures to upload, or I’d share some of the pics of the great big lugs riding on the kid’s toy tractor. They’re pretty hilarious. Oh, and the punkin my littlest grandboy painted for me. It’s adorable. And now sitting on top of my TV. (Hopefully, it won’t start leaking stuff before Halloween’s over.)

Came on home Monday, after taking the girl to the airport to fly home. The fella had to go to Austin with his board members Sunday, and came home on Tuesday just as I was heading out for the post office. It’s a lot farther away here than it was in Clarendon. Lot bigger, too. Anyway, last night, we had yet another thing to go to–at a Mexican restaurant this time (yum). Since there’s a big biker rally on the island this weekend–they’re expecting around 600,000 people to stop in–the “proper attire” for the dinner was Biker Gear. All I could find was a long-sleeved hoodie with a dragon on the front, which made it too hot to wear my leather jacket. Did my best, you know.

I’m told there’s an average of one death-from-stupidity per every 100,000 people at this biker fest. Rally. Whatever. Last year, one guy rode straight down 61st Street and right off the seawall without stopping. The fall killed him. He must have missed the ramp down to the pier, and gone off the side with the rocks at the bottom of the wall. Hope they’re smarter this year…

Beach report: Slower tides these days. Just one today, in fact–low tide at around 3 this afternoon. Lots of rocks on the beach, lots of gulls. Most of them were waking up for the day–except for one young bird who still had his/her head determinedly under his wing, sleeping late. Saw a one-legged gull again, and a cormorant, and a whole flock of the little skittery sand birds. Mostly I’ve seen them in ones and twos, but this was a flock. Saw a bunch of seagulls fishing, too. They were flying in a line, like brown pelicans do, but not as big, of course, and not flying nearly so high–maybe 3 feet off the water. Then they’d swoop down and fly along at less than a foot off the water for a stretch, then back up for another 10 or 20 feet, then back down. I think some of them dipped down to catch something every so often. Bigger waves–lots of guys in wetsuits with their surfboards. I even saw one coming out to surf as I was leaving.

While I have to wear actual shoes to walk, while it’s colder, I’m going to have to walk on the seawall sidewalk. I get too much sand in my shoes and track in up the steps and into the house, and I hate having to deal with the sand. If I’m in the flipflops and barefoot, I can wash it off on the driveway. Still, it’s going to hit 80 F (26C) most of the rest of this week. I could go later in the day and still walk barefoot…

Need to type things into the computer and see how many chapters of White Elk, Red Sword I have, and I can go work on the science fiction-y story… Need to come up with a title for that one.

One Response to Adventures in October