The Crosstimbers, or Prairies and “Lakes” (Texas for Writers #7)

And we’re back to the “regions of Texas” graphic again. Today we are talking about the Prairies and Lakes, or Crosstimbers region of the state of Texas. This area includes most of the central part of the state, up to the Oklahoma border. Some of it is North Texas. (Remember, North Texas is Dallas-Fort Worth north to the OK border–east and west as far as the Crosstimbers runs.) Some of it is Central Texas. A whole lot of Texas is in Central Texas, but like some of East Texas is in the Coastal Plain and most of it is in the Piney Woods, Central Texas can be in the Crosstimbers, the Hill Country, or parts of the Plains, whether northern or southern…

I lived in the Crosstimbers for about 20 years, so a lot of the pictures in this blogpost I took myself. Much of the territory is ranch country, and the among the prettiest ranch country in the state, in my not-so-humble opinion. The landscape is gently rolling hills with wide meadows crossed with bands of trees. The trees are not as tall as they get in East Texas. There are no pine trees, except down around Bastrop in the Lost Pines area–a good variety of hardwoods, plus nasty ol’ hackberry, mesquite and juniper–which everyone calls cedar or mountain cedar, but it isn’t cedar. It’s juniper. The juniper pollinates in midwinter and the people who are allergic really suffer then. I know of people who leave the state to avoid cedar fever, AKA juniper allergies.

The meadows are thick with wildflowers in most seasons of the year. Texas is one of the best places for wildflowers–I personally think every bucket list in existence should include coming to Texas during bluebonnet season–April to May, depending on what part of Texas you’re in. They are spectacular and almost unbelievable. The picture to the left was taken in 2012, when the winter rains had been decent.You can see the oaks and other trees on the far side of the pasture. This is a pretty typical landscape in the Crosstimbers, unless the meadow has been plowed up for row crops. Farther north, around Waco, cotton and grain sorghum grow really well in the black land prairie. You will note that the flowers are actually blue, not purpleish…

Texas is such a wildflower haven because 1) the winters are mild. Bluebonnets actually come up in the fall, grow all winter and then bloom in the spring. The mild winters help with that. 2) There’s a lot of sunshine in the meadows. The Piney Woods has all the shade flowers, and when the pine trees start to fade and the prairies and plains take over, the flowers just explode in the sunlight.

The flowers in this next picture are not bluebonnets. You will note that these are purple. They’re some kind of little tiny pea flower, about a half-inch in size with a sweet smell way out of proportion to their size. Oh, they did smell good!

Y’all can tell I really love Texas in the springtime. And again, the Crosstimbers Region isn’t desert. It’s prairies crossed by trees. 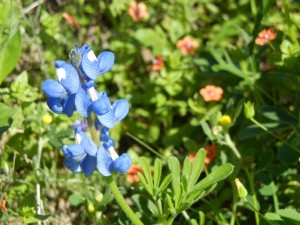 Do y’all know the difference between a prairie and plains? Apparently, in a technical sense, there isn’t much of a difference. The Great Plains are prairies. But prairies are supposed to be areas where grass is the main vegetation, and in the Crosstimbers, the prairies and the woods alternate. And there are rolling hills. The hills can get quite high in this part of the state, but they’re not steep. The steepness of the hills in Pennsylvania startled me. I’m used to a much more gentle slope. The hills in the Texas Hill Country are steep–but they tend to be bare rock. The ones in the Crosstimbers have grass on them, mostly. As you move west through the area, the hills tend to get higher and steeper, more like mesas or bluffs.

Dallas, Fort Worth, and Austin are the major cities in the Crosstimbers region of the state. Waco, Temple, Killeen and Fort Hood are also in this central area of the state. Austin is right at the dividing line between the Crosstimbers and the Hill Country, so East Austin is more Prairie-like and the west side of the city is more hilly, with the white rock hills and great views and lots and lots and lots of juniper. Austin is death on people with juniper allergies.

There are lots of lakes in this area, some of them built for flood control, others for water supply. But every one of them is from a dammed-up river. There are lots of rivers in Texas, all of them–except for the Rio Grande which begins in New Mexico–both begin and end in Texas.

One thing you Easterners might not consider–because when I did it in a car with people from the Eastern US, they looked at me like I was crazy in the head–but I bet you Westerners do just like I do. Every Texan I’ve ever talked to does it, too.

Whenever I cross a bridge over a body of water, I look to see if there’s water in the river.

Because there might not be. Those Easterners looked at me funny because to them–well, of course there’s water in the river. Where else would it be?

Not there. When we crossed over the Pedernales River (pronounced “Perd’n-ALlis) on our way to Marble Falls in 2011, when we were having such an awful drought, there wasn’t. We had to stop and take pictures of all the boat docks sitting on dry land. One side of the bridge, the river had a few puddles. The other side didn’t have even that.

You might have heard it said about the Red River, “A mile wide and an inch deep.” That’s pretty much what it looks like. Folks like to go down to the bed of the river to ride their ATVs, because it’s mostly red sand. And nothing else. Maybe a trickle of water down the middle…

There’s usually a little more water in the river north of DFW than there is up in the panhandle sections, but it still looks pretty much the same. That’s the railroad trestle in the picture, not the highway. I think. Might be the road. Notice it’s not very high…

What else is there to tell you about the Crosstimbers? Not much, actually. It’s in the middle of the state. It has rolling hills and grass and very fertile soil. The blackland prairie is some of the most fertile soil in the world, and yes, the dirt is black. Literally black. When the inlaws drove past once, they thought the fields had been burnt. They hadn’t. West (where the explosion was) is in the blackland area. There, it’s kind of a waste to just raise cows on the land, because row crops will be so much more profitable, so there isn’t much in the way of ranches in the blackland. Waco is in the blackland prairie. Hillsboro, where I-35 splits, is in the blackland. Another name for it is black gumbo clay, meaning it’s thick and gooey and slips and slides around. So if you’re in the blackland, you have to make sure your house is extra stabilized. Lots of foundation issues, because the soil swells and moves so much. In Hill County, (where Hillsboro is the county seat) the eastern end of the county is blackland–lots and lots of cotton, not so much cows. But about 8 miles west of Hillsboro, toward Whitney where I used to live, the blackland fades away to more sandy soil and white rocks. The western end of the county is full of ranches and a few watermelon patches. 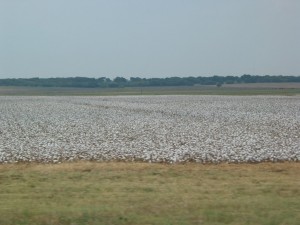 I can’t get the stupid picture of the cotton field to go where I want it to. Grr. I just thought it might be edifying for folks who don’t live where cotton grows to see it in the field. This was taken from a moving car, so…

It’s harvested with huge combines like wheat is, except they’re called cotton strippers, because they strip the cotton from the plant. When I worked for the Hill County Attorney we had a “Fleeing from police in a motor vehicle” case where the young man was running from the sheriff’s deputies in a cotton stripper. It didn’t go much more than 15 mph at top speed, but the sucker was so huge nobody wanted to try to stop it–at least 10 feet high, and as wide and long… It was pretty funny, actually. Oh, I do have stories from that job… However, that’s not what this blogpost is about.

I don’t know what else to tell you about this part of the state. Lots of hardwood trees. Pecan orchards. Oak trees. Lots of grass and meadows. Lots of row crops, but big ranches also. Depends on if the dirt is black or pale tan. The rocks tend to be mostly limestone. The sandstone crops up farther west. There are hills, mostly of the gently rolling variety. There are springs and artesian wells. A high water table. There are lots of rivers and man made lakes. To be honest, central Texas looks a lot like central Illinois or Ohio along the turnpike. Maybe a little browner in August. A whole lot bluer during bluebonnet season. But the landscape isn’t that different.

And once more, these blogposts are not anything like a comprehensive or complete description of Texas. I just want to get folks to realize that Texas is not what they might have seen in the movies (that’s most often California), nor is it all the same.