When I don’t WRITE FIRST 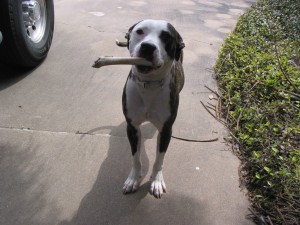 This is the granddog. Dolly wanted me to throw her bone for her when I took her picture. She’s not jealous of her toys at all, though she does like to play tug-of-war. She was just home for the weekend when I took the pic. She’s spending the summer with us now, and has filled out a little more. She’s just now getting to be a year old. I’ve enjoyed having a dog to play with and take out to walk.

We went walking this morning and she worked me hard–didn’t pull or anything. She was very good on the leash. But she likes to walk fast, and I hate to hold her back, so I walked a little faster. Which is good for me, so I probably ought to take her out more often, huh? 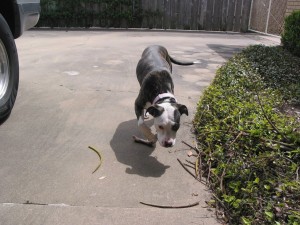 I was fussing at her, trying to get her to hold still in this other picture, and she dropped her bone and put on that “I’m in trouble?” look… No, I didn’t crop or compress the pictures. Should have, but I didn’t. I was mad at the computer, because it wasn’t downloading the pictures the way I wanted it to. I did finally get them downloaded–after only a little cussing…

I’ve been wanting to share pictures of the granddoggy–and to put some pictures on the blog just because they look nice, but, well… Mostly I blog at the dayjob these days, and I don’t have my pictures there. I e-mailed these to myself. I’ll have to do that more often.

Don’t know what I have to blog about. Went walking today. The beach was lovely. Not so much seaweed today.

I did get six good pages written yesterday…and today, I wrote a paragraph. I think it had more than one sentence in it.

See, I’ve listened twice now to a workshop on Writer’s Bootcamp, which discusses lowering goals to raise production. If your goal is one sentence, and you write two, you’ve achieved 200 per cent of your goal. (Right, math person?) Anyway, I’d like to write more than one paragraph, but –and I do know exactly what I did wrong.

I did not Write First.

I’ve learned over the years, especially when I got to write full time, that if I am going to get any writing done, I have to Write First. Before I look at the computer, package up books to mail, print out critiques for writing chapter meetings–any of it–I have to write.

Now, it is permissible to shower and have breakfast, and even to go out for a walk with Dolly (or without) (in which case, the walk comes between breakfast and shower, ’cause, you know, one must wash off the sand and salt and sweat–this IS Texas. The temp may only be 87, but there’s, like, 900% humidity which makes it feel like it’s 418 degrees…) before I start writing. I can also put dishes in the dishwasher, or put laundry on to wash (preferably not both), or make necessary phone calls before I start to wash. (The phone calls really need to come before the writing, because otherwise the phone calls get forgotten and my meds don’t get renewed, or my hair gets longer and longer and longer–which state it is in right now. Way Too Long and Shaggy.) But those are the only permitted chores. Otherwise, the writing HAS to come first.

And today, I didn’t. I needed to send an important e-mail, and I needed to see if another e-mail had come in. (I hadn’t checked e-mail since Monday, so there were a lot, and I didn’t read very many of them.) I needed to download pictures from the camera. I needed to print some stuff out, except I couldn’t remember where I’d put the files. Then I got out the pages I wrote yesterday. Then there were the books I finished that ought to go on Shelfari (I know. Time-wasters…) Then I looked at what I wrote yesterday.

I added a phrase here, moved parts of a sentence around there to give it the highest impact. I clarified that bit and took this other thing completely out. Then I had to put a sentence in another spot. I tinkered. And when it was time to go on, I wrote my two sentences. (I’m pretty sure there were two.) And came to a stuttering halt.

I HATE this. I want to be able to sit down and just write. And I’m fumbling all over the place. Summer usually sucks when it comes to the writing. There’s a lot of stuff going on. I’m traveling a lot, have commitments in the evenings, more people at the house. But those are just excuses. Because if I remember to Write First, I can get it done. Sometimes it comes slow, but it does come. I just have to Write. First.

This entry was posted in family, the beach, writing. Bookmark the permalink.

3 Responses to When I don’t WRITE FIRST