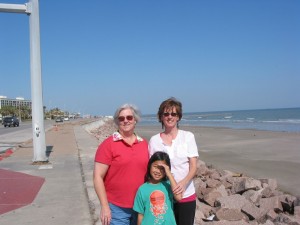 The fella went down last Thursday–to avoid the 10-mile long backup of people trying to get to the island on Wednesday. No electricity. No gas. No drinkable water–but flushable toilets.

I went down on Saturday with my sister and niece, so they could pick up her car. It was a totally gorgeous day. The surf was almost non-existent. We got a mini-tour of the city–mostly just what was around our neighborhood. Then I got the fella to drop us off at the seawall just up from our house so we could let the niece walk down the jetty.
See all those rocks in the background? They’re at the bottom of the seawall, which is where we’re standing (on the top). They were covered up with sand before the storm. This is one of the few places along the seawall that still had sand, and it’s only there for about half the distance between jetties. I’ll see if I can get a couple more pictures onto my dad’s computer, so I can share them with you. Our visitors just stayed for a little while. Maybe an hour. Then they had to take their rescued, non-damaged car, and go back home. I stayed.
The weather was really nice. It was cool out on the seawall where the breeze was blowing, but it got hot walking back to the house. Still, it was cool enough that I could take a nap after our company left and didn’t get overheated at all. We waited a little late to cook supper that night. We were pushing it to get everything cooked on our grill before we lost the light. We dined by candlelight. 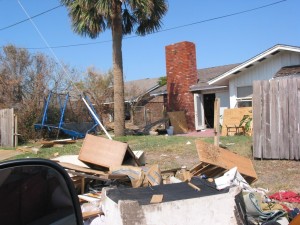 Sunday, we moved the refrigerator that belonged to the rent house out, because it was just totally gross. It was the only thing that had to go. Our own refrigerator grew a little bit of gunk, but this one… It dribbled gunky water when we had to tip it to get it out the front door, and made the whole house smell like dead fish. Had to wash it up with Clorox solution. That helped. A lot. We found out that even though our neighborhood only had a few houses with minimal damage, the city had told the power company that there was too much damage to turn the electricity on.
Just one street over, in houses that back up to the houses across the street from us, that is true. (See pictures.) But not in our street. So the fella (and at least one neighbor) called the power company up and told them the correct information. 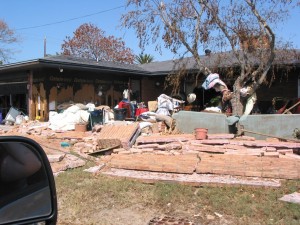 By 4 p.m., we had electricity. We’re still boiling the water to wash dishes and drinking the bottled stuff. The gas isn’t on, so we don’t have hot water. Fortunately, the cold water is closer to lukewarm (though with the cooler weather, it’s not as close as it is in August…) so cold showers aren’t that cold.
Let’s see, what else did I do on my island visit? Oh, we packed up stuff the son will need at college. They transferred the local campus students to the main university campus, and he managed to get into an apartment, so we needed to bring up more clothes, his computer cords and peripherals, and some linens. That went into my car. 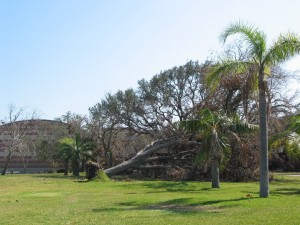 Most of the damage on the island was due to the storm surge. The previous two pictures are of the neighborhood right next to ours. The water action took out a lot of brick and stone walls. Wind took out others. If just the top was knocked down, we figure it was wind. If the whole thing was down–water.
The tree lying on its side on the junior college campus is a pecan tree which didn’t get knocked over by the wind. It looked fine right after the storm. But the salt water that covered the campus killed the tree, and three weeks later, it just gave up and laid itself over. Looks maybe like the roots died, because not much of them came up when the tree lay down.
I took some pictures of the Strand district downtown, but I had the camera turned sideways, and I can’t find a program on Daddy’s computer that will turn them right side up and save them, and when I get home later this week, I won’t have internet access. I don’t think. All of the buildings downtown took on water. All of them have a lot of damaged contents. But I don’t think any of the buildings themselves were damaged structurally. They don’t look damaged. But I’m sure you know how much that’s worth from this non-expert. 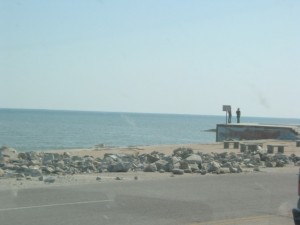 This picture here is of the seawall at one of the seawall parks near 45th Street. I think this is the one with the 1900 Hurricane Memorial at the far end (off to the right) that was in so many of the “Live from Galveston” weather reports during Hurricane Ike.
Anyway, down below the park areas, a whole lot of rock and broken concrete and rubble was piled as…protection? Support? Not sure why it was piled up there. But the storm waves picked up a whole lot of it and deposited it on the seawall and street.
You can see three benches in the right foreground. Those are concrete benches. There were quite a few of them at these parks. The benches got floated around and totally rearranged during the storm. Handrails got ripped off the staircases going from the top of the seawall to the beach. Boats floated up onto the freeway. There’s one stuck on the walls in the median between the north and southbound sides. Damage everywhere. And yet, lots of places didn’t take much damage at all. (Like my house.)
I feel utterly blessed. I don’t know why my home and our belongings were spared, but I am so totally grateful. I’m grateful for friends and even acquaintances who have worried and wondered and for all the doors that have opened to take us all in. Even (or maybe especially) the evacuation kennel looking after Dolly the granddog.
I’m going home to stay probably tomorrow. Dolly should be home by Saturday. The boy has his new apartment put together. His class schedule still has two classes at one time, but hopefully he’ll get that worked out soon. (His classes meet only one time per week in marathon sessions because they’re having to squeeze them in wherever. One class meets at the Methodist church on campus.) The Wal-Mart, Home Depot and Kroger grocery store on the island are all open, as are a few gas stations. We’re still boiling water, but life is beginning to come back together. Thank God for all the blessings he’s given.
This entry was posted in hurricanes, life, trips. Bookmark the permalink.