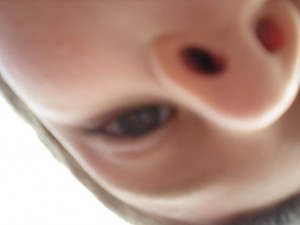 The daughter and her boy came to visit. For two weeks. It was wonderful.

They came to see us, and to let his dad get some work done on his dissertation so he could get it finished. So I didn’t get a whole lot of writing done while they were here. Partly because the first week they were here, my parents, sisters, brother, spouses, some nephews and a niece came to visit, and stayed in a beach house out on the west end of the island. We had to visit them as much as we could.

One of the nephews was just back from a Navy tour in Bahrain. He and the son went out one night. When the son came back the next day, he informed us, “I am never going drinking with a sailor again. Ever.” Oh well. Oh, and the day all of those relatives left, a nephew from the other side of the family–one of the fella’s brother’s boys–came to visit for 4 or 5 days. That was fun too. But again, didn’t get a lot of writing done. Did get a lot of swimming done. (Yay!)

The grandboy is six now. He likes to take pictures with his mom’s camera. With my camera too, but he took a picture of his nose with Mom’s. This is the boy with autism, and allergies to all dairy, as well as gluten. (The dairy is related to his autism, the gluten is related to his granddaddy.) 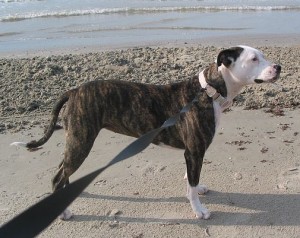 He had a few adventures with Dolly the granddog. She’s a pretty frisky, playful dog–she’s about 3 years old, and still has lots of energy, especially when meeting new people. Which scared the little guy. But it was too hot to be playful for very long, and she quickly learned that if she moved–if she even looked at him, he would run away. So she would just lie there in the shade and let him come to her.

Within a day or two, he approached her. Then he touched her feet. Then he patted her back. The next thing we knew, he had hold of her tail, had the white part in his mouth, biting it. (Don’t think he actually bit down, but…) It was rather traumatic getting him to calm down enough to listen to Granddaddy and understand “Don’t bite Dolly.” By the end of the visit, he was pulling up her lips trying to put dogfood in her mouth, and she would just turn her head and walk away. This picture of Dolly is about a year and a half old. She’s filled out quite a bit, looking very “pit bull.” It really is all in how they’re raised…

So, yeah. It’s been pretty crazy. But a lot of fun.

And I am writing. Really!

This entry was posted in family, life, trips. Bookmark the permalink.