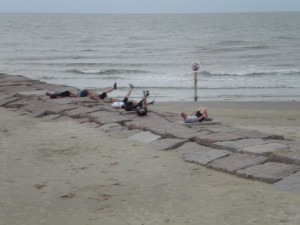 I am printing out the book now, and have to babysit the printer, in case the ink runs out, or the paper runs out, or it jams. So I figured I would blog while I printed.

I print the ms out to revise, because I miss less stuff that way. Problem is, it’s printing back to front, so I can’t start reading it from the beginning, (which is where you need to start, if you’re reading for continuity) until it finishes. Oh well.

I went for a walk this a.m., actually climbed down the steps to walk on the beach, in the water, and got out there before 8. (Usually I’m a little after.) I had to wait for a lot of traffic to pass before I could get out of the car, because I was so early. (I don’t like walking long distances in flipflops, and I wanted to walk in the water, so I drove. If you can follow my logic here.) And the first thing I saw when I got out on the seawall was these guys here, lying on the bare pink granite of the jetty, (hold on–paper reload) exercising.

I thought at first they might be some of the beach patrol lifeguards, but they never got in the water, and the guards always swim as part of their workout. Plus, they usually work out carrying those floaty lifesaver belts. Now I’m thinking these guys might be part of a Marine reserve detachment that got back from Iraq on Monday, running to stay in shape. 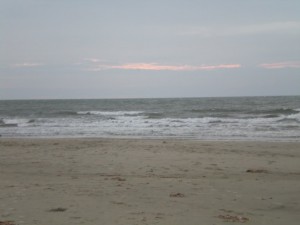 It’s still cloudy this a.m. There was just that one line of pink-tinged sky while I was out. Lots of wind blowing onshore, making a fair bit of surf. (We never have a LOT.) Water’s green almost all the way in–means good fishing.

I did see all the usual culprits in the bird kingdom while I was out. Laughing gulls, all white-headed since it’s fall. They were already mostly white-headed in August, though. (They have black heads during mating season.) There were willets and a couple of sanderlings (tall and short sandpiper birds, respectively). I saw cormorants and pelicans fishing. But I was very excited to see not just one snowy egret, but two out surf fishing. 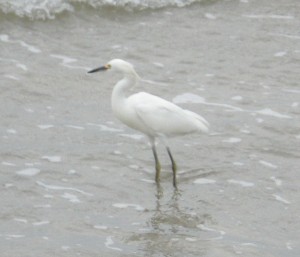 You can just see, I think, on the legs of the single egret, that they turn yellow about halfway down. That’s the snowy’s “golden slippers.” The original egret, in the first pic, is the one in the back in the other pic. Don’t know if they’re parent/child or “just friends.”

Another stop for putting in more paper. Had to go get more out of the box. I’m almost out of paper to recycle…you know, print on the back after it’s been printed on the front.

I have to fill in some more here, because I’m having trouble fitting all the pictures in, and I wanted to show you the picture of the TWO

egrets. They don’t come to the beach side of the island very often, though I’ve seen them a lot over by the bay and port. They like to perch on the lines tying boats up to the docks, and watch the fish. I don’t know that I’ve ever seen one jump off into the water to catch one, though. 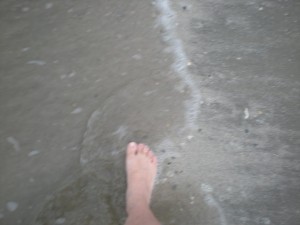 And there is my foot in the water. See? I was out there, walking, in the water with no shoes. The water’s still very warm, and it was nice and cool with the strong breeze. Humidity was still about 900%, but that’s pretty much a given. It’s an island. 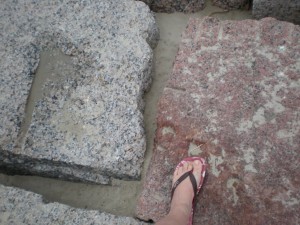 And this is my other foot, in its flipflop, crossing the pink granite jetty–the one west of the one the guys were exercising on. I picked this particular rock to stick my foot on, because it’s Very red. The rocks are all shades of pink, but they are all pink. Makes it purty. You will note the crevices between rocks. Some are larger than others. These rocks have had sand piled on them, so their crevices aren’t deep, but I have lost my whole leg down one of those things… Not like broke it off or anything– (look! They’re still attached), but like–sank it up to my hip in a crevice. One closer to the water, right after they piled sand on top and the water washed it out underneath…

Almost all of the ms. is printed out now, and I’m just driveling on. I do have more pictures, but I’m having trouble squeezing them all in. The “preview” doesn’t really show how they will actually come through on the blog, so I’m going to have to post and edit, post and edit, I think.

One Response to Blogging while Printing