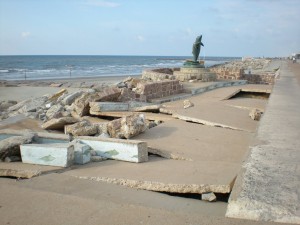 Picture: The dolphin statue at Fort Crockett Park on the seawall. Hurricane Ike washed out the sand and rocks supporting the concrete here, and you see the result. They’re going to be re-doing it sometime in the sort of near future, so I wanted to get a picture of it in its deconstruction. You can see how so much was knocked down and around and, well, ruined… and hasn’t been fixed yet.

Mostly I write blogs about my life. Because I don’t often think profound thoughts, or if I do, I’m nowhere near a computer and by the time I reach mine, I have forgotten what I thought of. I forget to write the thought down anywhere else too, like my “notebook-o-lists” or whatever else I might have.

Anyway, a lot of times, thoughts are springboarded from other blogs, which I haven’t been reading much, while I have been in the deadline cave (and with it being so cloudy outside, Boy is it Cavelike today). But I read one today. It’s a week or two old, and it’s a good blog by one Ali Hale on Three Words That Will Help You Finish Any Writing Project.

Her words–which I am now going to take and riff on–are: Outline, Deadline, and Lifeline.

I suck at writing short things, except for blog posts (and even then they tend to be long) and newspaper columns. Mostly I write novels. I just finished (on Saturday!) my 8th.

The process has taught me yet again, the importance of these three things.

FYI, I hate those outline things we had to do back in school, with the Roman numerals and letters and numbers and such. But I really discovered with this book, Heart’s Magic, when I was struggling so hard with the plot, that I cannot just fly into the mist. I have to have something.

I’ve used a lot of different frameworks for outlining. The Hero’s Journey (from Christopher Vogler’s The Writer’s Journey); Syd Fields’ turning points method. I had just bought Save the Cat by Blake Snyder when I learned I didn’t have to complete the entire story cycle in HM and pulled out the extra book’s worth of plot, so I used his outline format. Pretty much the same as the others, but a little different way of thinking, which seemed to unstick me. 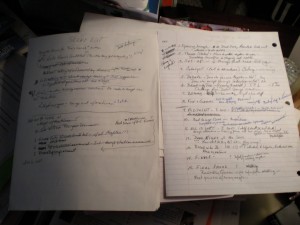 All I had, when I started putting the story back together, was one page of notes. One loose-leaf notebook page, one side only. It’s not particularly neat. In some places, all I had was a question mark, that I filled in with a tiny note later. That didn’t even turn out to be what I did in that slot. And later, I did add another sheet (of printer paper) where I wrote down scenes that could fit in each section. (these are my pages-the scene list on left, & “outline” on the right) I didn’t put all of those in. But whenever I got stuck, I had that page in my file folder that I could look at and see where I might/needed to go next.

I essentially wrote this book in 10 weeks, people. I struggled with it for twice that long. Because I didn’t have a decent outline. (Which was because I was trying to squeeze too much in.) There are some people who can’t work from an outline. I don’t know many of them, and I now know that I am definitely one of them. It’s not much of an outline. Fuzzy and amorphous-blob outlines will work too. But they’re outlines.

I’m going to have to riff on Deadlines & Lifelines another day… Have to go work. My deadline is tomorrow. Plan to e-mail it today.