Lifelines – or How To Keep Going 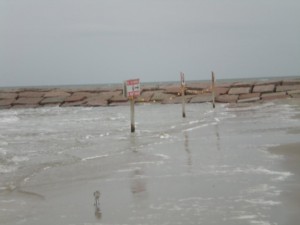 The princess wussy dog and I went for a walk this a.m. She makes me walk faster, so I get more out of it. I intended just to walk on the seawall (I have to wear actual shoes when I’m walking with her from the house–too far in flipflops) but she was a good dog–didn’t bother any of the people while we were out walking, and she kept looking over the edge of the seawall. She hasn’t jumped off since that first time. I imagine the 10-12 foot drop gave her pause. So we went down the stairs and walked back along the water. She was very good then too–did not slip her collar to chase birds and did not upset the small children by going too close. It was a beautiful morning for a walk, cool & breezy. (Cool for Galveston = hot for many other places. It’s probably 80F/27C) I threw in this picture of the “Do Not Swim Too Close To the Jetties” signs because I thought they looked festive with their red and yellow floats on the ropes–but you can’t really see them in the picture. Oh well.

Now, I am going to talk about those Lifelines mentioned by Ali Hale. She talked about how lifelines are other people who keep the writer honest. They keep us writing and working toward the goal of finishing a longer work, so that we keep writing those 10 pages a day, or 6 pages, or 2 pages. (There have been times that I struggled just to get a half page written.)

She mentioned writing critique groups, online or in person. And critique groups are great. I belonged to a fabulous group in Waco about 15 years ago, before I moved away from the area. Of the first 5 members, four of us have been published. I do believe in critique groups. The problem is, not everybody can find one where they live. I moved from my small town near Waco (I lived about 30-45 miles (48-73 km) out of town) to an even smaller town in the Texas panhandle, about 60 m (97 km) from Amarillo, the nearest city. No critique groups available. There are online crit groups that work very well for some people. I’ve never been able to make them work for me, because so far, nobody in any group I’ve tried to participate with has been consistent in either critiquing or writing. Which kind of defeats the purpose of a lifeline.

See, a lifeline is a form of accountability for those deadlines. When you set your own deadlines, there’s no penalty if you don’t make them, except maybe guilt, and getting down on yourself. However, if you’re producing 10 pages a week for your crit group, and they expect those 10 pages, (we met every other week, and shared 20 pages each time) you work harder to get them done.

That said, a critique group, for all that I love them and would love to have one again, is not the only kind of lifeline there is. The past 3 years, I have had a Goals Coach.

Back in 2006 I took an online class by Gwen Shuster-Haynes on creating a writing career plan for introverts and extroverts through the Kiss of Death mystery/suspense chapter of Romance Writers of America. I got a lot out of this class–I took it, I think, just before my publication contract with the LUNA imprint of Harlequin got canceled, and it really helped me organize myself and keep moving forward. Anyway, one of the things I got was the idea of a goals or career coach.

How this works, or how it’s worked for me, is that I teamed up with another person, we wrote down our goals for the week every Monday (or as close to Monday as I could manage), e-mailed them to each other, and then the next Monday, when we e-mailed our next set of goals, checked off what we managed to get done in the last week’s goals. My first Coach was Shari Bouillion, (I may have added or left out an I in there) who insisted we work out yearly and quarterly goals with dates. (I tend to be real wishy-washy about dates.) And that we include family, work, writing, and spiritual/personal goals. It’s obvious she was MUCH better at this goals coaching thing than I am. We coached each other for over a year, and her life got so complicated, she had to drop out.

I was bereft! I still wrote up my goals every week, and printed them out and stood them up on my lamp where I can see them if I ever get stuck with what else I need to do, but it’s not the same if you don’t have somebody to be a bit of a nudge. I limped along on my own for a while, when on an e-mail loop I’m on, someone asked about how to keep going through the end. So I did my goals coach pitch on the loop, and asked if anyone was interested, and now we have a 3-way goals coaching group going between myself, Natasha Moore who writes for Red Sage Publishing, and Carol Stephenson, who is one of those right on the verge of publication, that last frustrating phase before you finally make it over that final hump.

Natasha has very short goals lists. She confines hers to just writing. Carol prioritizes hers. She has a Must Finish section–which are not all writing goals–and a Priority 2 section which is “If I have Time & Energy.” I put all my goals in one long list, but the ones at the top of the list are top priority, and the ones at the bottom are lower. (I need to move “Exercise” higher on the list!) And it’s time to nag them (though usually it’s Carol that does it) to post some goals for the last quarter of the year.

We don’t critique. We all write Very different things. We write at different paces. Sometimes, we don’t post any goals for a week or two. I tend to disappear when we have company (friends & family love to come visit us at the beach). Carol moved house a while back and is still dealing with that. Natasha goes on RV trips. (Jealous!) But we come back when we need to, because it’s a way of keeping ourselves on track.

It seems to work best in a smaller group. We could probably add one or two more, but I don’t know that I’d go higher than four.

So. There you have it–another kind of lifeline for writers to stay on track. If you have a critique group that’s working for you, great! But if you don’t, you might try finding one or two other people who can help keep you on track by exchanging weekly goals.

This entry was posted in the beach, writing. Bookmark the permalink.