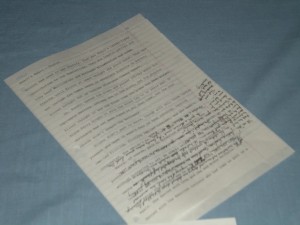 There’s a debate on the web, about the “just write” advice writers often give each other.

One side says: “Just plant your fanny in the chair and write, whether it’s working or not, whether you feel like it or not, no matter what. Don’t edit–just write.”

The other side says: “If it’s not coming, take a break. Read a book. Watch a movie. Take a walk. Write something else. Do other writing-type stuff like marketing. Just don’t push it.”

And, as usual, I’m one of the people who says “Yes, Exactly!” to both sides. (I’ve always been one of those “yes” people when asked either/or questions. As in “Do you want chocolate or vanilla?” Me: “Yes, please.” or “Can’t I have both?”)

I think part of the debate comes when people are told “If you don’t do this, then you’re not a real writer.” Which is BAD. Even when we tell it to ourselves. I’m working through Julia Cameron’s Artist’s Way (and I’m not making a link for that, because I have too much to do as it is–you’ll just have to look it up yourself) with my best friend, because she’s been doing some of that to herself. Any time someone tells you that you have to write This Way, because otherwise you’re doing it wrong, it’s BAD. Because it just ain’t so.

That said–if you want to be a writer, and you’re not writing? That’s when you have to just Sit Your Fanny In That Chair and WRITE.

If you’ve been writing, and it’s not working? Try something different.

I spent February through mid-July of this past year (as those of you who have read this before know) wrestling mightily with The Book That Became Heart’s Magic. I wrote pages and pages and pages of scenes that will not be in the book. They are Good scenes. A little action-heavy, but good. I’m hoping I will get to use them elsewhere with some tweaking. I may not. I wrote them because I had a Sept. 1 deadline and had to get the book done. But I knew something wasn’t right. The book just Was Not Coming Together.

Some days I wrote a whole half page. Some days I wrote Nothing. I walked on the beach. I journaled about the issue. I brainstormed and plotted with friends. I visited family and went to writer’s conferences and free-wrote and took the dog for walks and read books and watched movies. I fit and fought with the thing–knock-down-drag-out combat. And I wasn’t winning. (Not sure who was, but it sure wasn’t me.) I kept writing, but writing wasn’t all I did. It took me till mid-July and a conversation with my editor before I finally figured out that it was a plot issue, and the issue was that I had way too much. (As I have said before.)

But all of that wrestling and struggle and fighting was not a waste. Since this is the second time I’ve done it, I will probably try to put way too much plot into a book again, and not figure it out for a while. (The plots of New Blood and Heart’s Blood were originally both in New Blood. I realized I had two complete plots about 1/3 of the way through NB.) If I get to write more blood magic books, I already have a plot for one.

And I think–by the time I did pull my plot together, I knew my characters and world so well, things just flowed.

Of course, when life throws craziness at you, and you can’t write because of this issue or that one–whether it’s illness or hurricane evacuation (that was Heart’s Blood) or a house full of company for two weeks in the middle of the last month before deadline (Heart’s Magic…)–It is important to acknowledge that Stuff Happens, and you just can’t beat yourself up over it.

The thing is, there’s a lot of stuff that’s included in the writing process that doesn’t necessarily include putting new words on the page. For some people that includes a lot of plotting. For others, that part may be minimal, but they do a lot of revising. It’s all writing. It all counts. And as long as you’re producing something you are pleased with and that accomplishes your personal goals–it’s all good.

Oh–the picture. Did you know that looseleaf notebook paper would go through a printer? Neither did I. I recycled paper from a revision and didn’t realize I had looseleaf paper stuck in the middle of some printed pages with my inserts written on it. This page I could read. Most of the others, I had to reprint…