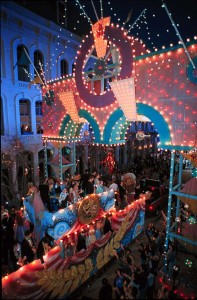 No, Mardi Gras did not cause my mania. That came from an entirely different source. But Mardi Gras was a whole lot of fun.

Last weekend was the first weekend of Mardi Gras. Galveston celebrates it too, on a scale commensurate with a town only 1/4 the size of New Orleans. There were three parades along Seawall on Saturday, one at noon, one at 3 p.m. and one at 6 p.m. I was going to ride with the fella in a convertable in the noon parade and toss stuff for the college, but the convertable owner/driver busted up her right foot recently enough that the doctor wouldn’t let her drive (Maybe just the night before.) I didn’t think there would be room for me on the float (besides I would have had to stand up), so I sent him off to fling beads on his own, and walked down to Seawall with the boy. (The picture is of the arch downtown, at one of the downtown parades. They’re next weekend.)

One of his friends had set up a flatbed trailer in front of the grocery store, with a grill, and he and his family were grilling all sorts of things. Chicken, venison-cheese-jalapeno sausage (Yum!), brisket, ribs, boudin–you name it, they were cooking that stuff on that grill. Ate a sausage and a chicken leg, hollered for beads during the Aquarius krewe parade, got sunburned, then walked back to the house. At 6, some more of the son’s friends showed up–for the parking. Our house is closer to the seawall parades than a lot of people have to park. So we all walked back up to the grill trailer to watch the Gambrinus parade. Including Dolly the granddog. She was very good for the parade. The Budweiser Clydesdales fascinated her. The drums in the bands scared her, the first few of them. She ate lots of rib bones and snackies, (I had another half-sausage & a Mojito cooler) and she met a dog that looked almost exactly like her. The other dog had the same shade of brindle coat, same white face, same patch over the left eye–the main differences were that the other dog is 11 years old, and Dolly is 3, Dolly is a little bigger and heftier, and she has a white tip on her tail.

I scored some good beads. The fella threw me a string with harlequin jester heads, and never saw me waving at him. But he got me good beads anyway.

And I got a strand of beads with beer mugs on them that night.

Then the next day I was packing up to travel to check on the Alzheimery parents, and got a phone call from my mom that my dad was in the hospital. So I hurried up to get here–He’s home again now. He caught a stomach bug that he needed an IV to recover from. It’s been pretty hectic. Haven’t been able to write, for taking care of folks. But things just worked out okay. Now to get all their tax stuff together…still missing a couple of 1099s. Sigh.

One Response to Mardi Gras and Mania