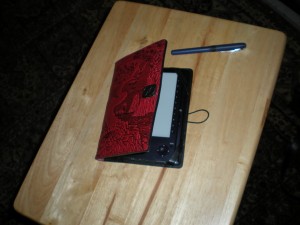 I was going to blog about poetry and words and art and stuff, but I’m not feeling very poetic. Or wordy, or art-y, though I might be feeling somewhat stuffy. Anyway, I decided not to blog about that, but instead, to see if I could show you my spiffy new sorta-toy.

It’s not really a toy. It’s a beautimous cover for my toy. You can see the Sony e-book reader inside the open cover here.

See, I broke the cover the reader came with. I dropped it, and the plastic spine up the back cracked. I read it for several more days before the end cracked all the way through, but eventually, it broke in two pieces, and would no longer hold the book reader.

I still kept it in the original reader, for protection, when I wasn’t actually reading, but I took it out to read. Still, it would slip out when I put it in my bag, and slide around and annoy me. And I found this Place. Oberon Design had a PR post card at ApolloCon last year. They may have had jewelry and leather also, but I don’t remember. I went to the website to look at jewelry–which is very cool–and saw the Very Neat leather goods. With e-Reader Covers! They have them for Kindles too, but I don’t have one of those, do I? 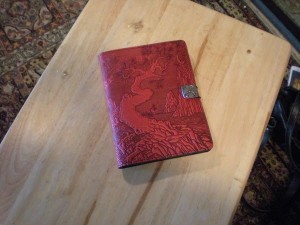 Now I will let you look at the awesome design on the front. It is a Chinese river garden. They have many, many awesome designs, and I was sorely tempted by the dragon, and the raven, and the starry sky. But I wound up getting this one, because it was the one that kept drawing my eye first off. (The design continues onto the back.) And it’s red. Each design only comes in a couple of colors. I like red, though I didn’t get the red Sony reader.

Anyway, I think the cover is very spiffy. I like it whole bunches and have to show it off to everybody. And sooner or later, I will get around to writing about poetry and songs and art and words and stuff. When I’m feeling more arty.