We are finally doing some serious looking for a house. This may all change if we don’t get the answer we expect from the mortgage company, but we have started the process and have been to some open houses and gone driving through neighborhoods, as well as doing a lot of cruising on line. Some houses look better in person than they do on line. Some look worse, especially after you drive by the neighbor’s houses.

Anyway, because I get a kick out of watching House Hunters on HGTV, I’m going to do my own little version of House Hunters here on my blog. We will have more than 3 houses to pick from here, because I have infinite (sort of) space to post stuff. I probably won’t post Every house we look at, just the ones that are possible.

So, that said, we went to some open houses on Sunday. One of them moved directly from our “possible” list to our “no” list–the house had been damaged in Hurricane Ike (all the ones we looked at on Sunday took on water during the hurricane–75% of the houses on the island flooded) and hadn’t been put back together well. The other two–one of them moved from the “probably not” list to the “might work” list, and the other from not even on the list to the “liked it-but there are issues” list.

So, the house we liked is a historic home across the street from the medical school on the island. The current owner works there. We do not, but it’s a quick hop to Harborside which is a mostly straight shot to the newspaper, and a pretty quick jaunt to the fella’s work. 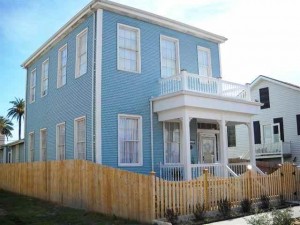 It’s a pretty house, with essentially no yard whatsoever. There is a small flower-bed-type area in front of the house. The back of the house is a patio. No room for trees–except maybe a palm tree, and given that they mostly survived the hurricane and the freeze this winter, that might not be a bad idea. There is also a small deck on back of the house. It is much larger inside than it looks from the outside. And those 14 foot ceilings (or maybe higher–they are Very High) make the rooms look even larger.

It did take on about two feet of water in the hurricane (Everything in Galveston is divided into “before Ike” and “after Ike”), but the remediation job is gorgeous. The original wood floors were completely refinished, the walls redone–the job was done Right. (And 2 feet of water is nothing, considering downtown businesses mostly got 8 to 10 feet of water, and houses near us took on 4 feet.)

The rooms are large–except for a tiny little den-type room they have set up with a TV. I think it’s too little for our den furniture. There’s a sunporch-type room that might fit our stuff and be usable as a den, and I would take the den room (with the laundry room right off it) for my office, but the fella makes a face when I say that.

The bedrooms upstairs are huge. There are two full baths upstairs, and there are actually closets (which can be an issue in an older home-this one dates to 1897 or so, which means it survived the massive 1900 storm too). And there is a garage. Two cars with storage. Those are the pros. 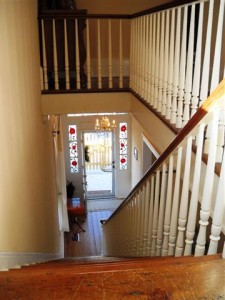 The cons–those 14-foot ceilings mean the staircase is Very Long and kinda steep. (This is the view from the top of the stairs, looking toward the front door.) I have bad knees. The idea of carrying a laundry basket down those stairs gives me the heeby-jeebies. And the den/study issue is problematic.

Also, the exterior is wood siding. This is an island on the Gulf of Mexico. The weather is Hard on paint. Things that would require re-painting inland in 10 years tend to need painting in 5 years here. And the fella isn’t wild about that idea–having to paint frequently. You saw in the picture just how much there is to paint on the outside of this house. (Even those 30-year paints only last about half as long in this climate.)

The missing yard is an issue too, given that part of the reason I want my own house is that I want my own dog. A small dog would be all right, but the fella isn’t wild about small dogs. (He scowls at the idea of a dog at all…)

So–this is on the “liked it” list. It has all the requirements. The location is decent, though it’s not in a neighborhood, per se, being across the street from the hospital. It has a separate den/TV room, or a room that could be used that way. It has a garage. I could see myself living here (except for that laundry-basket-on-the-stairs issue). 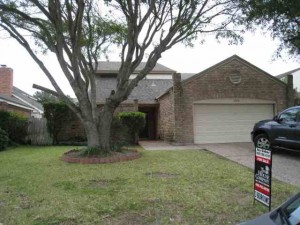 The other house that’s on the “might do” list was on the other end of the city. We did drive out past the end of the seawall to look at houses in the closest bayside subdivision, but–besides not caring for the houses–the fella decided it would take too long to get to work in the mornings. So we’re pretty much looking in the city, behind the seawall.

This second house was much newer (by about 100 years). It took on several feet of water–somewhere between 2 and 4 feet. The repair was done well in some places, and not so well in others.

It has a small parlor-type room right inside the front door, then opens out into a good-sized dining room with a den/living area beyond. The kitchen’s off to the right with a breakfast area, and a little courtyard right outside that is in pretty good shape. The tree is still deciding whether it’s going to live or not, but it’s a pretty area. There’s a good-sized covered deck off the den (needs paint) and a smallish yard–but it is a yard. And the master bedroom is downstairs. The re-do of the master bath is very nice. Slate floor, slate around the bathtub, separate shower, double sinks. 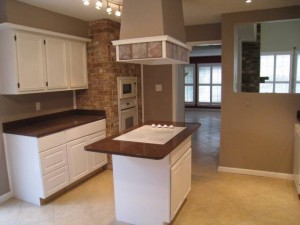 The not-so-good stuff–the kitchen re-do is not very good. You can’t see it in this picture, but the counter tops are pretty. Red-and-gray granite. I like the counter tops. But there’s not much counter space, that central hood thing is weird, and the oven and microwave are almost too tiny to cook in. And–see how the counter top on the island extends beyond the cabinet? There’s a gap like that next to the refrigerator. About a foot more counter top than there is cabinet. It looks weird. We would probably have to redo the kitchen again. The house is priced so we could do that, but it would be a pain.

Also, the stairs–they are not so good. I can’t get my whole foot on a stair tread. The stairs used to be open at the back–suspended–and now they aren’t. So they’re too short. Admittedly, I have big feet for a girl, but that means that almost no adult male alive can get his feet on the treads. There are two bedrooms upstairs, one of which would have to be my office. It would be a good thing to be able to fit my feet on the stairs. But at least there’s only about 10 feet worth of stairs, not 14 or more. And once the boy graduates (in May, we hope) there wouldn’t be laundry upstairs that needed bringing down.

This one is an “okay, but not wonderful” house.

We’re still waiting to see what the bank says, so we haven’t called any agents yet to get in to see some of these other houses we’ve found online. We’ll do more open houses this coming weekend. Maybe we’ll find some more houses to go on the “liked it” or “might do” lists.