We are still waiting to hear from the loan company. We want to know if we can do this the way we want to before we really start getting seriously serious in the house hunting. So we’re just going to open houses and such. This past weekend, there weren’t many houses open–not houses we wanted to look at anyway. One was on the street where we rented for 6 weeks when we first moved to the island–where Ike flooded everything about 12 feet or more–and it floods often, even without major hurricanes. Nope, not going to move over there… 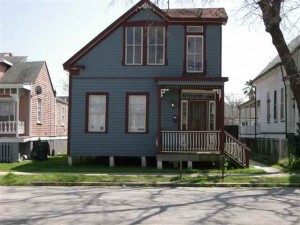 Anyway, this house was also in the historic district, which looks VERY different with all the trees gone (Hurricane Ike killed them). When we drove up, the fella was already going “Nope, nope, don’t like it, don’t even want to go in.”

It looks pretty good in the picture, doesn’t it. But that paint job is starting to peel on the sides, and the roof’s bad, and those balusters on the porch? They’re the style that bulges out. (You can kind of see it on the non-stair side.) I think it looks seriously funny. Plus the porch sags to the front.

Inside, it looks a lot better than outside. They’ve done a lot of nice things–first floor master bedroom, new kitchen cabinets, etc. But the dining room is also the walkway through to the kitchen, there’s no den, and it’s a little pricey for what still needs doing. There’s a huge garage with a garage apartment out back–3 cars’ worth (one for the apartment)–but it hasn’t been touched since the storm. There’s still Ike water in the outside light fixtures. 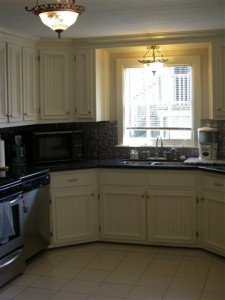 It’s one of those deals where–if you offer the full price, you’ll get a new roof and the apartment redone and all, but if you don’t–well, there’s the house–You fix it. Like I said, the interior re-do looks very nice, but the floors slope, and the doors stick, and the outside doesn’t look so great. So I don’t think we’re going to go with this slant-roofed Victorian. (Even though it is just a few blocks away from The Original Mexican Cafe.)

In other news… there isn’t much. I had a blister, or swollen vein or something in my mouth that made my teeth hurt for a week. It finally burst and feels much better–I can eat now–but it has turned into one of those mouth ulcers. Ugh. Still, when it was really hurting, I couldn’t sleep and sat up in the recliner dozing to the Weather Channel all night. So I’m really glad it’s over, mostly.

If I’m going to get anything written today, it will have to be tonight. Spent the morning getting the oil, the power steering fluid, the gas filter and some other kind of fluid that goes to the universal joints changed, and some other thing cleaned out on my massive beast of a vehicle. Now I am at the paper, getting stuff done here. Back to work.