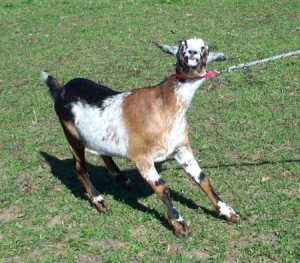 I’ve been trying to write a love scene for about a week now. (At least.) I know that a love scene is the next thing that happens. I know that it will happen eventually. But my characters are being amazingly difficult about the whole thing. It’s kind of like trying to lead a critter that doesn’t want to be led. Which has me thinking about my process, and wondering whether non-writer people would understand. (Probably not.)

See, I’m not one of those writers who sits down and just starts writing, flying by the seat of my pants into the mist to see where the story takes me.

Conversely, I’m not one of those writers who plans out the story scene by scene, chapter by chapter. I don’t know where my chapter breaks will fall until the second draft, at least.

I’m something of a hybrid between the two. I have to have some structure–a plot skeleton to hang the story’s flesh on, and often, a list of scenes I think I want to write. (Though that list is often not developed until I reach the roadmap’s turning points, to mix my metaphors.) But I can’t have too much.

Basically, what happens when I write: I have my roadmap, or skeleton, or beat sheet–whatever term you want to use. I have turning points and Major Scenes written down. I might also have a list of things that need to happen after This turning point, in order to reach That turning point. Beyond that, I really don’t know much.

I line my characters up–put them on their marks, to use acting jargon. She is here, doing this, wearing these clothes (or not, as the case may be). He is over there, doing this other thing. There are people outside, or in the room around them, or maybe the characters are alone. Then I tell them–this is the situation, this is what has just happened, and this is what is going to happen in this scene.

The one I’m trying to write is a love scene, but it could be anything. I could tell them: “This is the scene where He tells Her about his dead child,” or “In this scene, She gets His shirt off to look at an injury and is mortified by her attraction to him.” Or whatever the scene might be. I tell them what the scene is, and then I say, “Okay, Ready? Go!”

This particular love scene comes fairly late in this book. I know my characters well by this time. I know how they’ll react to things. Which is where the stubborn comes in. I know good and well these two people are going to do it. But I am having the dickens of a time getting them to the point, because of who they are. I can’t say it’s because of who I’ve made them, because I’m not sure I can claim that. I tend to get acquainted with my characters more than I invent them. My hero is a good guy and he’s damn proud of that. He’s a little rigid on the point, which is what will make his fracture so delicious. And my heroine is crazy. But she’s not as crazy as she’d like to be. I’m hoping that tomorrow I may be able to move beyond the talk into some action. I hope. (Please, people!)

I know already that I’m going to have to go back and thin out some of the repetition, and probably shorten it, because it feels long. (Though it may not be as long as it feels, because I haven’t written that many pages over the week of trying to get them started.) But I had to write all that to know what actually happens. To turn my characters loose and let them lead. Because for me, that’s when I know the story is going to be what I want it to be. If the characters have taken over, that’s when it’s working.

So while I’m frustrated that they’re taking their own sweet time about this, I’m also content to let them do it the way they want.

And how are things going for You?

2 Responses to Following the Characters’ Lead