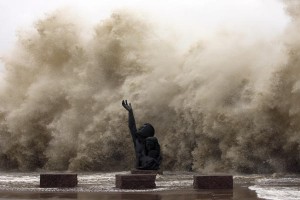 Hurricane season officially begins in the Gulf of Mexico on June 1, which (the Gulf, not June 1) as I type is either about 3 miles away, or 400 yards (you can do the conversions to metric, my brain is too tired to look up a website to do it for me). It depends on if Offuts Bayou counts as the Gulf–which I guess it doesn’t, since it’s really off Galveston Bay. So–3 miles from the dayjob. Two blocks from my house. (The picture is from “our” hurricane, Ike, at Fort Crockett Park, about 6 blocks from my house…)

However, I don’t pay a whole lot of attention to it until a tropical depression forms somewhere and the Weather Channel starts to get excited about it. On June 1, our hurricane supplies are only beginning to dwindle from last year (I think we still have pinto beans from 2 years ago), and we’re probably not riding anything out anyway, so… yeah. No need to get really excited about it until there’s something to get excited about.

Which means that last week, when “The tropical depression that will be named Alex if it ever gets winds above 50 mph” was fooling around in the western Caribbean, the fella went out and replenished our hurricane supplies. We now have TWO 40 lb. bags of pinto beans. One of them is half used. We just don’t eat that many pinto beans… Plus a humongous bag of rice, which will probably have to be replaced before the season is over in November, many cans of tuna, chicken, green beans, etc. and 4 or 5 cases of water bottles. We may have to replace those too. We drink the water.

Unless weather patterns change drastically, tropical storm Alex won’t mean anything to us here except rain and maybe some waves for the local surfers to get excited about. The rain is pretty exciting too. It’s been dry. And the oil spill cleanup shouldn’t have to stop working either.

Anyway, now that there actually IS a hurricane in the Gulf, it feels like hurricane season has arrived.

We used to live in Tornado Alley. All my adult life, actually, I’ve lived in Tornado Alley. I don’t get too worked up about tornados, because most of the time, they go somewhere else, and if they hit–well, there’s not a whole lot you can do about it, except get in the bathtub or closet in the middle of your house, because usually there’s not much warning, and they’ll probably go somewhere else anyway. Hurricanes give you a lot of advance warning, and it’s easy to leave town to get away from them. (For us, anyway. We have lots of inland relatives to stay with, too.) But when they hit, they really hit.

So. Yeah. It’s Hurricane Season. There’s an actual storm in the Gulf. It’s going somewhere else. Life goes on.