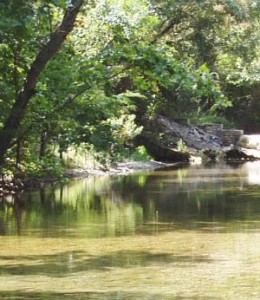 I said I was going to go, I went–didn’t even have any cell phone access for texting, unless I walked out of the cabin and waved my phone around near the cars–and now I’m back to tell you all about it.

The picture is of a central Texas river, not where we stayed–although the Bosque River flows through Valley Mills. But there was a cattle-watering pond, known as a tank pretty much throughout Texas, just outside the back door with overhanging trees and banks that looked a lot like this. The water had a lot of duckweed in it, and the water level was about 2 feet down from when we were there in the spring, but it was just as clear as this, when you could see around the weeds. Lots and lots of dragonflies.

Which we didn’t see much of. It was hot as blue blazes–around 100F (38C) when I was driving out there. The cabin had air conditioners, and this was supposed to be a working weekend. We stayed in the cool as much as possible. Took three or four walkabouts around the cabin or along the drives in when we just couldn’t sit any more. And yes, we ate LOTS of fruit salad. Friday night, B went over her notes for the novella she was working on and did some tweaking, while I went through my research book which I dug out and brought with me so I could be sure what I wanted to do corresponded with what was really happening.

Saturday, we got up, had breakfast, and started writing. That’s pretty much the whole weekend, actually. Every so often, I would get stuck, and we would talk out what I’d got stuck on. Mostly, it was me interrupting B, but once or twice she wanted to talk something out. Saturday night, we had a big salad at the cabin, then did some plotting for two ideas I had, then talked some more about B’s story. Then we got out the Tarot cards and did a little reading on her characters and suchlike. Sunday, we got and wrote, had lunch and wrote, and then went home. We got to stay a little later, since the new people weren’t coming out to the C-Bar till Monday, and we took advantage by writing.

I came home with 20 pages, which is the most I’ve ever done in two days. Also a bad case of butt fatigue. The book still isn’t finished, but I’m a lot closer. There may be only one big scene left. I think this book is going to need an epilogue. Deal with it. I have my fingers crossed. I have also written some both days so far this week. I think I can keep that up, until all the relatives come. Which is Saturday.

We will have ALL the grandboys here. For a few days, anyway.

One Response to Writer’s Weekend