According to my goals list, I didn’t get a whole lot accomplished last week. It felt like I was spinning my wheels most of the week too. Got my opening scene written, and then stalled out. Couldn’t figure out where to go from there. Part of it was an “order” issue. I’m a linear writer, which isn’t the same as a plotter, or a “pantser”–someone who just starts writing and figures it out as they go. The other kind of writer is a “puzzler” who writes scenes as they come, and then figures out what order they go in. I Really can’t do that. I have to write mostly from beginning to end, because my scenes build on each other. If I leave something out I decide I need, I can insert it without much of a problem, but during the first draft stuff, I pretty much have to have stuff in the order it happens.

I am also trying to do my first draft on the computer this time. Not really because of the time issue, but because of my vision issues. So I’m doing a LOT of stuff on the computer. I also have a lot of my thinking files on the computer–including a scene list. I put the scenes I’ve already written in red for his POV and in blue for hers, and the ideas for future scenes–if I know I need the scene, it’s in black, and possible scenes are in purple. I’m not very far ahead. I sort of know where I’m going, but my roadmap is REALLY vague.

I also need a new title for Old Spirits. It sounds like booze to the New Yorkers, and isn’t “romancey” enough. (I don’t know what was so “romancey” about New Blood…) So I have to get my brain in gear and figure out a new title. Not my best topic. All suggestions invited. (The Conjurer’s Apprentice?) And I have to do a few revisions on it, ramp up the action early on. I think I know how to do that. (First, cut out all the boring stuff that I didn’t already cut out.)

Last week was a really lazy week. I did take Dolly the granddog to the vet, because she apparently ate something that made her sick. She quit eating and almost quit drinking, and acted like a sick little doggie. She’s all better now, though. Back to her high energy, Gigi-exhausting self.

I am enjoying my new Sony e-reader. Alternating between reading a book on it, and reading one of my backlist TBR books. I have caught up on my RITA books. Finished them off, unless I’m asked to do a second group, and can read stuff just for fun. Or from my TBR Challenge list. I have Sabriel off the shelf, sitting on my desk… Okay. After I finish Kitty and the Dead Man’s Hand, I’ll read that one.

Oh, and I have two articles to write this week, and a list of interview questions to answer. The first article is due Wednesday (I think.) The questions need to be answered before next Tuesday, and the second article is due next Thursday. Need to doublecheck on the newsletter topic.

AND, I need to get a newsletter out to my newsletter subscribers. New Blood is out NEXT WEEK. How did it get to be almost March so fast? Ack!

Okay. Off to work.

Talking about Show and Tell

Laura Shin said this on The Pink Ladies Blog: “Take “show and tell.” Some writers avoid narrative introspection because they’ve been told that’s telling. Yet, I would in most cases rather know what a character is thinking—her reaction—and not read generic physical actions that are supposed to show me how she’s affected.”

Sometimes I think this avoidance-of-narrative-introspection is a “guy writer” thing. Something that E. Hemingway started–and I blame him for a lot of stuff. For the stripped-down writing style that has been so popular, for one thing. And for the “girl-cooties” school of thought about “litrachure.” It’s not that I am fond of purple prose, but it does sometimes seem that all metaphors and adjectives are now considered suspect in certain circles. Ah well.

I tend to blame television and movies for the lack of internal reaction in novels today, not the “show vs. tell” issue. If we’re in deep POV, the thoughts and emotions are showing, though they can seem like telling, I suppose. These days, a lot of newbie authors, the ones I judge in contests, tend not to go on and on with backstory and what the characters are thinking– they’ve been trained out of that, I suppose. Lately, I’ve seen the pendulum swing too far the other way. They write prose that reads a lot like a screenplay, with dialog, action, and nothing else. Which means a lot of the characters’ motivations for their actions are completely missing.

If we don’t get what the character thinks about something, or how they feel about something– about who a person is, or what that person does, or about what they themselves do–then we don’t get to know who this character is, and we don’t know why they do what they do, and without knowing the character and understanding them, we don’t care what happens to them. We have to explain what’s going on inside a character’s head. It doesn’t take a whole lot. Just…enough.

Here’s an excerpt from the first of my Rose books, The Compass Rose, to demonstrate what I mean. (I’ll put the internal reaction in another color to make it easier to spot):

Torchay had changed out of his finery into old trousers, his tunic off against the heat as he worked through his bodyguard exercises.

“Don’t you usually do that earlier in the day?” Kallista tossed her pendant on the table beside the big bed and kicked off her shoes.

“I did.” He finished the flowing form he was doing and stopped. The faint sheen of sweat over his lean musculature tempted her eyes to look, to drink their fill. “I felt like doing it again. I didn’t expect to see you before dawn.”

“Yes, well…” She tugged her fingers free of the thin snug leather and pulled her gloves off, flexing her sweaty hands in the slightly cooler air. “Didn’t work out.”

Torchay walked toward the table. Kallista backed off. She couldn’t bear being so close to him. Not now. He poured water from the pitcher into a cup and drank it, then poured the rest into the basin and splashed it on his face. Kallista watched his every move.

When he had dried his face with the flimsy towel, he turned and saw Kallista watching. “Can I ask you somethi—? No.” He shook his head. “Never mind.” He hung the towel up and reached for his hair to release his queue.

“What?” Kallista loosened the laces of her dress tunic. “If you have a question, ask it. You know you can ask me anything.”

She looked up and saw his gaze focused on her. The candlelight reflecting from his eyes made them glow with blue flame. She lost herself in them for a moment before she recalled he’d asked her a question. “Yes, of course. Anything.”

Once more he hesitated, seeming to look for something as he gazed at her, but what, Kallista didn’t know. [I put all this in a different color, because part of it is what K. thinks he’s doing.]

“All right,” he said finally. “I will.” He ran his fingers through his unbound hair and it fell in waves around his face, crimson in the candlelight. “When you have gone out hunting all these years—“ He paused for a deep breath, looking away only an instant. “When you have hunted a man, why did you never choose me?”

Kallista swayed, Torchay’s question touching unseen things deep inside her, drawing her tight, opening her up. Her nipples beaded beneath the brocade weave of her dress and she tucked her hands beneath her arms, more as a guard against unwanted magic than an attempt to hide her body’s reaction. [all of the previous is a physical reaction–with a teensy bit of explanation, but after is where we get the true emotional reaction.] Why did he have to ask her that question now? Now when she wanted him so much it made her mouth dry and other places all too wet?

“I— It’s not that—“ Goddess, what could she say that wouldn’t either insult him or encourage him?

Torchay waited, his face an impassive mask, candlelight licking over his sculpted form, tempting her to do the same. She curled her hands into fists against the urge to touch.

When I judge contests, I often feel like a psychoanalyst for the characters, given all the times I’m writing “Why?” or “And what does he feel about that?” Those things do need to be included. Not over pages and pages, but all the way through every bit of it.

Posted in articles about writing, fantasy, The Compass Rose, writing 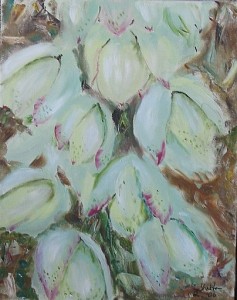 I was going to do a blog about Maureen Dowd and her cluelessness, but I’ve never been able to read Dowd anyway (Oh, how I miss Molly Ivins! She’s the only one who really ever got Texas politics) and we all know she needs a great big giant clue, so forget about her. I just want to get WARM.

We finally got the snow/ice melted off our back patio, and it decides to snow again. And get really, really cold. It’s gotten warm enough to melt some of it off, especially off the streets, so I haven’t had to do the 4-wheel drive thing, but it only stays that warm till for about 15 minutes, then gets cold again. Ugh. This time last year, my tulips were coming up. It snowed all morning yesterday, and most of the morning today. Good writing weather.

I actually got 7 pages written today, the most all week, but still not as many as I wanted. I may reach Paris soon. In fact, I’m hoping to get everyone there tomorrow. Cross your fingers.

I should have re-potted my plants this afternoon–I bought the potting soil so I could do it–but didn’t get there. I went to the college basketball games, but missed the end of the women’s game and the beginning of the men’s because I went to community choir. All ladies tonight, but at least there was more than me and the director this time. (I forgot completely last week…) It was fun to sing, but I rusted the voice out doing it and didn’t cheer at the ball game at all. I clapped really loud, tho.

Just agreed to write an article for the Published Authors RWA chapter website. Got to do that by Monday. Now, if I can get any revisions for Eternal Rose from my editor, I may have my ducks in a row. 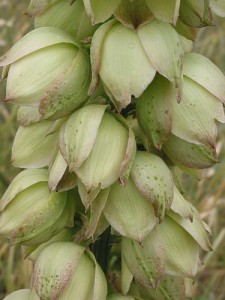 Um–another painting. I think I finished this one last August or September. I painted it from this photo I took.

Let’s see…I went on a reading binge earlier this week. I read Blood Bound by Patricia Briggs, Let There Be Suspects by Emilie Richards (a cute mystery with a minister’s wife heroine), Catching Stanley by Deirdre Martin (hockey playing hero, neurotically shy dog trainer heroine), Howling Moon by C.T. Adams and Cathy Clamp, (hero’s a werewolf, heroine’s a shapshifting jaguar with a serial killer jaguar after her), and Maelstrom by Anne McCaffrey and Elizabeth Moon (living planet that’s evolving the people and beings living on it). Hmm. No wonder I’m not getting much written this week. Reading too much…

Posted in articles about writing, painting, what I'm reading, work