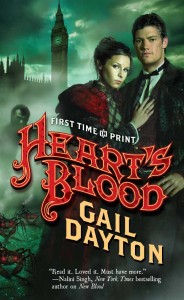 Okay, so I did promise the magnificence that is the cover to Heart’s Blood, the second book in my steampunk blood magic universe. It truly is beautimous.

Look! There are little mechanical spiders with red eyes down in the lower left hand corner. There is Big Ben. There are moody clouds. There is even the villain lurking behind the title. And there is a quote from the wonderful Nalini Singh (who is one of my favoritest people now, besides writing really great books). 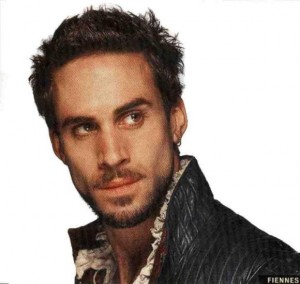 Admittedly, I think the hero looks a tad young, even though they’ve olded him up a bit. And okay, I have to admit that I visualized him–well, actually, I started off visualizing him as oh, this guy– but he didn’t stay that way.

Partway through New Blood, (the first book, remember?) Grey Carteret, the hero of Heart’s Blood, morphed into Johnny Depp, as seen in the movie From Hell. It wasn’t my idea. It was totally Grey’s. 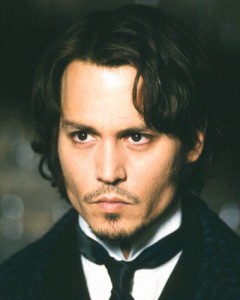 But hey, it totally worked. For some reason, especially when the characters are the ones who decide how they look, they acquire personalities and do a lot of dictating of the story. I didn’t have to make up Grey’s banter. He just spouted it off for me to take down…

And yes, I know exactly what Harry Tomlinson looks like, and he is providing his dialogue and the rest of it for book 3–but I’m not telling you who plays his part, because– Well, just because…

So, if you want, you can paste the one face over the other face, or if you like the one on the cover better, you can imagine that one, or whatever suits your fancy. I just thought I’d let you know a little bit about the weird way I work. (Yes, it is true, I have never grown up. I still have imaginary friends. Scientists have done a study of novelists and other writers of fiction, and shown that we (authors) relate to our characters in an identical fashion to how children relate to their imaginary friends.) Sometimes I cast my characters. Sometimes they cast themselves, and there’s nothing I can do about it… In my head, in Grey’s behavior, Mr. Depp plays the part of Grey Carteret…

I went to the Romance Writers of America national conference last week and got home last night at midnight or so. It was a great time, but man, am I tired now. Of course, the tiredness is mostly because I walked to the National Zoo from the hotel, and all through the zoo, and back to the hotel again, and my calves are knotted up like a macrame plant hanger. The rest of my legs are just sore.

I will try to get pictures downloaded this week and posted. The grandboys (and their daddy) have come to visit for the week, and their dad is sleeping in my office, but I bet I can get some pictures onto the blog. I have pictures of the panda bears and an orangutan crossing the zoo on the special “O-line” cable, and a wolf, and a few other animals. Do not let me forget the pictures!

I took many more pictures at the zoo than at the conference–I kept forgetting to get the camera out–but I do have a few. It was a good conference. I sold about 12 copies of New Blood at the literacy signing–more than half of those donated. The big news about that was that they were all sold to people I don’t know. It’s easy to sell books to your friends, but not so much to strangers. A number were made curious by the steampunk label, so that was all good.

Had my first “OMG, you’re Gail Dayton!” moment, complete with a hug like we were long lost sisters. That was fabulous. And my “fangirl” was a librarian with the Portland-area King County library system. Who did a little “favorite library story” podcast thing with me. I left her card at home, so I’ll have to get back to you with the link.

Got to see the cover to Heart’s Blood, WHICH WILL BE RELEASED IN JANUARY, instead of February as I had thought. I will get it up here and on the website asap. It is gorgeous, and I can’t wait for y’all to see it.

I moderated two workshops, and volunteered at another where the moderator didn’t show and the speaker had transparencies to put on an overhead projector. I swapped out the pages. I went to a number of interesting workshops, but of course, I can’t remember which ones they were at the moment. Several of them helped me figure out why I am struggling so much with this book–the 3rd in the steampunk series–though the biggest thing I just figured out last night/this morning. Which is:

I am once more trying to cram two books’ worth of plot into one book. So I will have to pull all the extra stuff out and focus on the correct main plot. This ought to help tremendously in the “get the &#@$!%*! book written” department. I am now re-doing all my plot points and such. Trying to get it sorted out. I may do this “Save the Cat” style. Yes, I finally found the book.

So–I’ll do my best to get pictures and such downloaded and posted asap. Again, nag me, if I don’t.

Beach observations and other news

I meant to post this yesterday, but got too busy. Today’s no less busy, but I am determined.

First, want to say thanks for the “Awws” from Catie and Barb. I have decided that I need to walk more often, but not quite so far, because I get tired and don’t pick up my feet and trip over stuff. My bruises are better, and my hand is doing that “getting well” itching.

I drove down to the beach to walk yesterday, because it’s more fun, and because I wanted to spend my walking time actually on the beach, not getting to it. And I didn’t take Dolly. I tend to observe stuff more when I don’t have to deal with the dog.

First observation: The seaweed has come in. Blankets of it. I was thinking maybe it’s a little early for the big piles of seaweed, but maybe not. We’re almost halfway through May… I saw some logs that had floated in that looked like they had fur. Greenish fur, but furry, nonetheless. (Yes, I know it’s algae. But it looks like fur.) And a tennis shoe that had been in the water long enough that it had those lipstick clams attached to it. Quite a few decent sized ones… I only saw the bottom of the sole, not the top, so I don’t know how much of the upper shoe survived, but that sole had been floating around a long time.

I only saw one seagull. I was out there by 8 a.m., but I think because the sun’s coming up earlier, the seagulls are giving up their “standing by the edge of the water waking up” earlier. I saw lots of sanderlings and ruddy turnstones, all of which had two legs. They have a little butt wiggle when they’re running away from you…

I also saw a shark that had washed up on shore. It was about a meter/yard long (give or take that difference between a meter and a yard), and it didn’t have a tail. I don’t know if it died and got washed up because it had lost its tail, or if it lost its tail after it got washed up. It didn’t look like any scavengers had been at it… I have no idea what kind of shark it was, though. I’ve been looking–not a nurse shark. Dorsal fins aren’t right. Its nose was really square across, so it’s not a pointy-nose shark or a round-nose shark. Hmm. It was gray, with that straight-across nose, one rather pointy dorsal fin, no barbels (catfish-like whiskers), gill-slits in front of its side-fins, and small high-set eyes. Haven’t found the right picture for it yet. And having its tail missing takes away another thing to help ID it. Oh well.

In other, more interesting news, New Blood is a recommended read by the Virginia Beach Public Library! It’s a lovely review–and they’re recommending it!! I’m excited.

I got my copy edits for Heart’s Blood (Grey’s story), and have finished them up, except for the chunk of 25 pages that got left out of the ms they sent me.

What do you think of Blood from Stone as a title for Harry & Elinor’s story? Stoneheart? Heart of Oak? Working on villains for the story… Villains are such a pain.