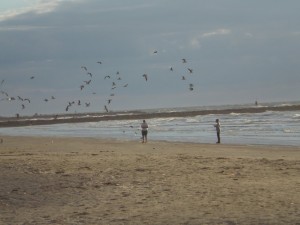 Okay. So, I went walking out by the water today. It was a rather surfy morning with lots of wind and birds (royal tern, snowy egret, cormorants, pelicans, willets, first ring-beaked gull of the season, as well as herds and flocks of laughing gulls), and I saw these ladies feeding the gulls.

As I walked nearer, more gulls arrived. They were flying over from–from miles away, or it seemed like it. The gulls already present didn’t seem to be making much noise. No cries other than the usual, from what I could tell, and not many of those. And I decided that seagulls must have telepathy.

There must be some extrasensory sense they use to tell each other when somebody’s throwing food. Because there might be One seagull when the first breadcrumb gets pitched, and dozens mass out of nowhere to fight over it.

I’m pretty sure these ladies aren’t local. Most of the locals are not fond of seagulls. They’re too much of a nuisance to want to feed them. There are a few locals who will feed seagulls. The matriarch of a local restaurant kingdom used to feed the seagulls from the balcony of the hotel next to their flagship restaurant. There’s a statue in the restaurant of her, or someone, feeding gulls. There’s a story going round (I don’t know how true it is) that she died falling from the balcony while feeding the gulls. But let’s leave that depressing digression and return to my next thought.

Which was: Which is the worst nuisance? Pigeons, grackles or seagulls?

My vote goes to grackles.

Seagulls? They’re stuck by large bodies of water. They have webbed feet , so they can’t sit in trees and poop on the cars parked under them. (Take note, director of 300 where a seagull sits on a spear–not possible. Webbed feet can’t grasp a spear!) Their cries aren’t that annoying. Laughing gulls have a lower pitched cry than other gulls, so it’s less annoying than those others. They’re also smaller birds, as gulls go, so they don’t poop as much as the big herring gulls. Also, I haven’t seen them sitting on the beach in groups larger than, oh, maybe 30 or so. Mostly less.

Pigeons have a wide range. We have pigeons on the beaches. Sometimes. They do sit in trees and on statues and stuff, and I think there may be a pigeon ESP as well, because they seem to gather instantly when somebody starts throwing bread crumbs. But they don’t seem to gather in flocks as large as the grackles. Also, they’re edible. And they coo. Nice, soft, cuddly-sounding coos. 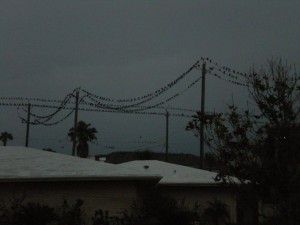 Grackles? They’re as big as pigeons, beak to tail, but they’re skinny. No meat on their bones. And they collect in flocks that can take over whole city parks. Thousands of birds. We took this picture in February/March (around Mardi Gras). The power lines are not that thick. There are birds along every line, and they’re all over the lines across the street, and along the rooflines, and in the trees (there aren’t many) and Everywhere. Massive, Alfred-Hitchcock-worthy flocks.

Besides all the pooping and gathering and flocking, grackles do not coo. They do not tweet or chirp or cheep. They Screech. Like nails on a blackboard. Literally. And they clack. Sort of like a 3 Stooges “Nyuk, nyuk, nyuk,” but louder. And more clacky. And then they screech again. Endlessly. Back and forth at each other in their ginormous flocks.

If I have to have grackles, or pigeons, or seagulls, I will take seagulls. If I can’t have seagulls, I’ll take pigeons. If only I do not have to deal with grackles. Unfortunately, on the island, we have all three. Sigh. 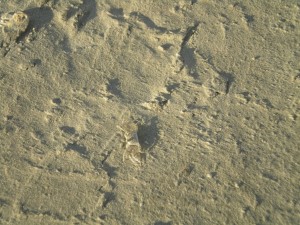 Oh. I took a picture of a little sand crab too. It was very cool. I almost didn’t see it, it’s so tiny, and so close to the same color as the sand. Can you see it in the middle of the picture? It’s casting a pretty big shadow. The whole thing, from one end of its little legs to the other, is about the size of my thumb, to give you a size comparison. I only spotted it (and the other, smaller one I saw) because they were running across the sand. Back to their holes, maybe.

I did write today. I got all the way to the end of the action in the synopsis. I now need to write the emotional denouement. I am not sure what it will be. I also pretty much left all the romance plot out of the synopsis. I’m trying to lean harder to one way or the other in SF or romance. I do pretty much half and half, most of the time. I can write the romance in the story, but I’m having trouble writing it into the synopsis. It’s like–the romance happens while they’re doing this other stuff. We’ll see how it works. Maybe this story is the other way round. Ah well.

So–what’s your vote? Grackles? Pigeons? Seagulls? Which is the worst nuisance???

Went back out walking this a.m. on the beach. Did not take the dog. The weather was cloudy and windy, and a bit rain-spitty. But I wanted to walk on the beach, so I drove down, rather than spending so much time just walking up there and back. I climbed down the stairs at a place where one of the stair rails was broken off the concrete stairs and three-quarters buried in the sand. The part that wasn’t buried stuck out of the sand at an angle, like some drowned spar.

Anyway, where I climbed down, they hadn’t put any additional sand down. They’re replacing sand washed away by Hurricane Ike, but hadn’t done it yet in that area. However, they’d piled sand up on the other side of the next jetty, clear to the top of the jetty. I climbed up on the rocks, from “my” side, but I wanted to walk down by the water, where the sand would be harder packed, and–well, the sand is piled up so high, it makes a little cliff. Higher than I wanted to jump down with my wonky knees. So I walked down the jetty to where the tide had washed the sand down.

Except it had washed the sand underneath, between the rocks, and not on top of the rocks, and when I was standing on what I thought was sand over rock, turned out I wasn’t. I was standing on sand with a hole under it. And my entire left leg crashed through the sand into the hole between the two big jetty boulder/rocks. Next thing I knew, I was sitting sprawled on the sand-covered jetty, with my leg down a hole. Didn’t hurt me. Had on long pants and walking shoes and socks. The sand made a kind of cushion, so no bruises. Just a big surprise. And a lot of sand down my leg, in my sock & shoe.

But getting up and down those jetty rocks was a lot of work. So I hiked down to the next set of stairs –past the next jetty– and climbed up and walked back to the car on the seawall. And got rained on, a bit. It’s cloudy and windy, but not cold, today. Until the Gulf washes more of the sand down, and makes that edge not so cliff-y, I’ll probably stick to seawall walking for a while…I do need to go take a picture of it, though, so you can see what I’m talking about…

Now, we come to the random thoughts section:
I did see 15 pelicans flying out to fish. And did I mention that the seagulls have their black heads back? It will soon be the season for seagull love…

The boy and I watched “300” again last night. And there was a scene with a bird sitting on an abandoned spear (from one of the dead, I think). And when the bird flew away, it made a seagull cry. Except–seagulls can’t sit on spears. Their feet aren’t right. They’re webbed. So they can’t perch. They can sit on pilings and broad flat posts and roofs and stuff, but they can’t perch. It would be like a duck perching on a narrow branch. Ain’t gonna happen. So now, I’m criticizing the birds in movies. (sigh)

Took Dolly to the vet this a.m. after my walk. Turns out, she not only has allergies like the rest of the family (her “white” eye is really sensitive), but she has a wonky knee like her Gigi. That’s why she limps sometimes, because her kneecap keeps sliding out of position. Knees, not hips. We got ointment for the eye–it got infected from the allergy irritation–and shots, and she’s in great shape otherwise. She was SO excited at the vets. Wanted to sniff at all the smells and play and sniff and play and… I think she scared an elderly dachshund’s elderly owner, running up to sniff and play. The dog was a little affronted, but the owner looked alarmed. So we took her out the other way. Dolly, not the dachshund.

Went to see TWO (2!) movies this weekend. Taken and Push. Liked both. Becoming Jane and Hancock came in from Ntflx. Jane came in twice. I reported that it hadn’t come (they mailed it from Houston, and it didn’t get here in a WEEK. I can drive to the far side of Houston in 2 hours…)(Plus, we got the other movie, watched it and mailed it back before the 2nd Jane came.) so they sent another one. And now I have 2. I will mail it back. I have enough clothes to fold for a movie watching marathon tonight.

I have written 7 pages so far of HARRY & ELINOR FIGHT MONSTERS. I am going to attempt to write this on the computer. We will see how it goes. If I don’t get my page count up, I may go back to the longhand…except that I probably wrote a LOT more pages than I have left, since I started, and started over, and over again multiple times. When I write that in longhand, I still have the scratch-outs to show that I actually wrote more. I am saving some of the deleted bits–and have already used some over again–but it’s still not as much as the saved. Anyway, I’m getting to the more exciting stuff, so maybe it’s going okay…

Posted in birds, movies I watched, pets, the beach