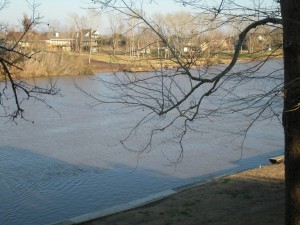 I was here over the weekend, and it was wonderful. (This was Saturday, after the rain stopped–the view downriver from the upstairs deck.) We had workshops with a creativity coach who talked about recapturing the joy in writing, and how to be happily interrupted and other such things, plus there was time to write, and a concert, and white elephant gifting. Some of the white elephants were lovely. Some were…not so much.

The location was a house on an island in, I believe, the lower Colorado River. The only access to this island is by barge, or aerial tramway. It rained all day on Friday, the day we arrived, too wet, really, to cross on the barge. So we crossed on the tram. 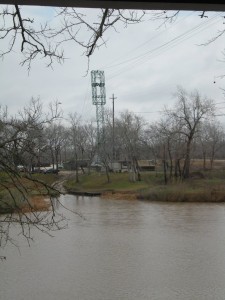 The tram was WAY up in the air! And it was small. The wind was blowing, and the car tilted sideways, and it swung back & forth when it crossed the towers (that’s the first tower in the picture–the barge landing is right below it, to the left). And I’m real nervous about heights. But I did okay. I did not scream and clutch at the handrails or cower on the floor. And I stopped shaking once we got on the ground. 😉

It was just a wonderful weekend. Everyone brought potluck for meals, and we had WAY more than anyone could eat. We didn’t even open the ham someone brought.

My BFF Belinda came down from Waco with her fella, and they spent the night Thursday. Then Friday, in the pouring rain, we drove the “back way” down to the river house. We had to come a different way from everyone else, because the others were all coming down from Houston, and we had to just slide down the coast and come inland some from our island. Belinda and I drove in my “bus” and Ken followed us. In the rain. He likes to drive around and look at the country side. We were driving through flooded fields on both sides, lined with moss-draped trees. It was lovely. (Okay, the several junk yards we passed by weren’t so great, but…)

The only access between the downstairs “quiet” floor and the upstairs “brainstorming / workshop” floor was an outside staircase, so we got a little wet carrying things up and down. Mary (whose house it was) got REALLY wet, driving the golf cart to pick people up. She was so wonderful to open up the house to everyone, and work so hard to get everyone there.

B and I got there around noon, so we could just wallow in the experience, and wallow we did. Belinda had a one-on-one session with the coach. I did Tarot readings for at least half of those who came, including the coach. Some of them told me what their question was, and others didn’t, but they all said the readings were amazingly spot on. Well, one said she didn’t see some of the things, but… Anyway– I got a kick out of doing that.

Saturday night, Kathryn the coach, who is also a singer- songwriter, gave us a little concert with some wonderful songs. She did not bring enough CDs for everyone, and I don’t have mine yet. But let me tell you, the song LIVING WELL is a fabulous bluesy creation and You Need To Hear It. I fully expect to hear another of her songs performed by some bigtime country singer in the near future. 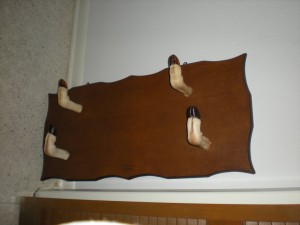 Then it was time for the white elephant. I didn’t get an elephant. I got a gun rack (for my (non-existent) rifle collection). Yes, those are deer hooves. Real ones. With fur and everything.

As you can see, I did bring it home. It’s going in the Lions’ Club white elephant Christmas party game this next year.

I told my son to bring his friend Walter over to see it. Walter grew up on a farm/ranch outside Tyler, TX. I think he will appreciate it. (Yes, the picture is sideways, but the deer feet are the right way up.)

So now, it is time for me to run to the grocery store for ice cream and Cokes. (In Texas, all sodas are Cokes, whether they are Coca-Cola or not, but I really am going to by Coke Zeros.) And then pack my car and head off to the parents’.

I started rewriting a synopsis for White Elk, Red Sword while I was at the retreat. Mostly I was there to refresh and renew, but I did start on the synopsis. I finished it yesterday. So now I’m reading research books, and I hope to get back to work writing next week. I aim to get my head back into the story so I can do it.

Got a couple of inches of fresh snow this a.m. Fortunately, it warmed up enough most all of it melted off. Except for the stuff on top of the ice and snow still on my back patio. I’m beginning to think that won’t melt till spring arrives for reals.

But that meant that this week, I had to write a new synopsis to go with all the stuff I wrote and finish the story. I wrote and wrote and wrote. Lots of pages’ worth. (You all know my theory–you get to count synopsis pages double because they’re twice as hard to write.) Then I scratched out two or four pages’ worth because I decided I didn’t need the ballpeen hammer murders in this book, and could save them for someone else, because with the Hungarian Inquisition, who needs murders too? So I have a brand new ending–or rather, the same events still happen, but they happen for different reasons, and different bad guys commit the same evil events, and it all works out beautifully and ties everything together, and I probably never would have figured this all out if I hadn’t sat down to write as much of the story as I could all at once.

Got to go to town yesterday and paint. I am happy. I got to work on the portrait–it’s close to being done. Fortunately, I ordered more canvases. I’m out of things to paint on, unless I paint over something…which I could well do…

I have 9 pages of synopsis written, which will probably type up to 15, and counts as 19 or 20 pages in the “count” because of all the pages I got to X out when I took out the murdered guys.

Oh, and I got to go to the doctor again today. (I went yesterday to let them look at the skin cancer that’s being erased with a cream) Now I have a lump on the side of my neck, right on top of the muscle there–a swollen lymph node in a weird place, so I get to take drugs for that too. Lots and lots of pills. I don’t feel bad. Except the lump is sore. Oh well.

Community choir starts tomorrow. I will not forget. (And if I do, y’all get to chastise me.)