My book for January’s TBR Challenge read is a series romance. 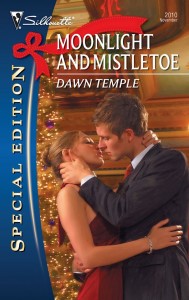 Moonlight and Mistletoe
by Dawn Temple

It’s a Silhouette Special Edition, published November 2009.
This is a sweet, enjoyable read about a small-town girl and the big-city lawyer who isn’t really trying to hustle her–he honestly thinks he’s doing her a favor–but it’s a favor she doesn’t want, involving a pair of sleazy birth parents she’d just as soon forget. He doesn’t believe she’s as nice as she really is–and has trouble accepting that he’s just as nice. There’s a big dog, some local holiday festivities that remind me a lot of the holidays in all the little towns where I’ve lived, and just a great romance. I liked it a lot.

I’m posting this late on Thursday, but it’s still Thursday!

I’m late because I had to rearrange my whole week to go to the parents’ yesterday. I had intended to head up on Monday, but the doctor appts. they had on Tuesday they changed to Thursday. So I switched around the days I was going to work, and drove up yesterday.

And then today, while we were getting organized, the doctor’s office called. Their systems were down, and they had to cancel ALL the patients’ appointments for the day. Who knows when they’ll be able to reschedule? And I needed to come back home, because I rearranged my work days to work tomorrow. Sigh.

I hope they can go by themselves. I wrote down Mama’s question for the doctor, she put it in her billfold, then I wrote a note and stuck it on the outside of her purse that says “Doctor question is in the billfold.” So maybe she’ll be able to find it and ask it. If that doesn’t work… Well, who knows when my stress level will go down…

I did finish reading my research book…